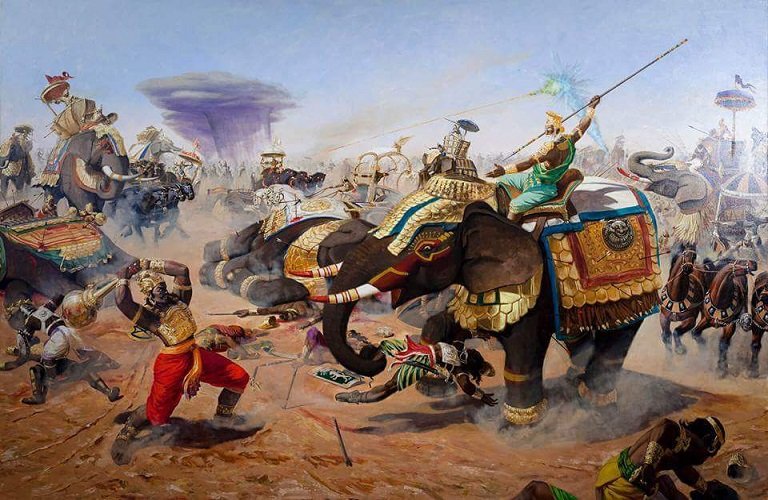 The Mahabharata as a great epic is relevant even today. It is called fifth Veda as it encompasses literally all things “good” and “evil” in our society. Delving deep into the psychology and the attributes of its characters is like an extraordinary plunging into an ocean which is unfathomable. Going through the intricacies and complexities of its characters is an exciting journey which offers so much to learn and understand. Unlike Ramayana, Mahabharata is not about Ramrajya, and it deals with realities of human emotions like deceit, cheating, hatred, jealousy, treachery, and revenge.

Mahabharata’s stories have been an integral part of Indian household since time immemorial, yet it is unfortunate that we have not been able to apply its lessons to our daily lives. Mahabharata is repeated time and again on Indian soil under various circumstances and contexts. Therefore this article is a sojourn to have an idea of what is righteousness or Dharma for an individual to follow. The epic is literally a storehouse of diverse stories dealing with all aspects of human psyche. From every character of Mahabharata, we can learn some very important aspect of human nature.

The first and foremost lesson that can be drawn from Mahabharata is that giving too much indulgence to children is ruinous. A glaring example of it is the overindulgent attitude of Dhritarashtra towards his sons which made them profligate. Dhritarashtra had turned blind in his love for children which deeply affected his power of insight. He never dissuaded his children from doing wrong deeds. Consequently, they all turned to be stubborn and perverse particularly Duryodhana. Likewise Gandhari’s desperate step of blindfolding herself too turned out to be cataclysmic for the great Kuru dynasty. She failed to provide due attention to her children and they as a result deviated from the path of righteousness and truthfulness. It is thus proved that every parent’s utmost duty is to keep one’s children’s upbringing the topmost priority. This is something that is becoming more and more obvious in our “modern” society which tries to copy western behavior. A fall-out of this is increasing gun-violence and gang-violence by children in many US schools.

Another important learning is that extreme ego and arrogance leads towards devastation. In this context the enormous haughtiness and overbearing attitude of Duryodhana ensued horrendous warfare for the Kuru clan. The Kauravas even forgot about the dignity of woman and treated Draupadi disparagingly while playing the game of Chaucer. Here they violate one of the most sacred law regarding the dignity and respect of the woman.

There are many insights which can be gleaned from the themes of friendship and loyalty. There are two major instances of unprecedented friendship one between Lord Krishna and Arjun and the other between Duryodhana and Karna. Krishna became Arjuna’s charioteer during the war due to his preeminent love towards Arjuna. In the Bhagavad-Gita Lord Krishna himself claims Arjuna to be his closest friend and considers their friendship as transcendental and eternal.  When Krishna and Arjuna are together on a chariot, it is as if they become one in a divine sense. Likewise there existed selfless love and friendship between Duryodhana and Karna. The only Dharma that Duryodhana followed or fulfilled was sticking strictly to his friendship with Karna. Similarly in one instance once Karna’s wife asks him what he will earn out of the war where he is fighting against his half-brothers. Karna’s response is a glimpse of his feelings of gratitude towards Duryodhana. He says he values Duryodhana’s friendship and loyalty above unreliable family relations. Before the war when Kunti meets Karna and shares with him the story of his birth and pleads to be with the Pandavas, he refuses her offer on the pretext of his lasting friendship with Duryodhana.

An interesting learning from Mahabharata is that everything in this world is relative with multiple facets and we cannot treat things as black and white. There is an eternal conflict of various dharmas and each must be understood in its own context. One prominent example is that of Karna. Karna failed to perform his duty towards his mother Kunti when asks him to not fight his brothers and he refuses. The thing that is needed to be taken into consideration is that Karna’s primary duty is towards his friend Duryodhana who during his hard times trusted him and accepted him so his Mitra Dharma stands tall in front of his Putra Dharma. Similarly the dilemma of Bhishma Pitamah is one such example. He had taken the vow of lifelong celibacy and of service to whoever sat on the throne of his father (the throne of Hastinapur).)Due to his vow he had to fight on the side of the Kauravas though reluctantly.

The biggest dilemma in the Mahabharata is faced by Arjun at the battlefield. He is filled with despair on fighting with his own clan. Extremely perplexed he seeks the advice of Lord Krishna: prcchami tvam dharmasammudhacetah sisyaste’ham sadhi mam tvam prapannam [My mind confounded about Dharma, I ask Thee: … I am Thy pupil. Instruct me, who have sought Thy grace.]

Krishna instructs Arjuna: “Having regard to thine own duty, also thou oughtst not to waver. For to a Kshatriya there is nothing more wholesome than a lawful battle”.

In the epic likewise Yudhishthira is often confronted by moral dilemmas. One such happens when on answering the Yaksha Prashna satisfactorily, the Yaksha asks him to revive any of his four brothers who on being not able to answer his questions were laid low by him. Without hesitation Yudhishthira asks for the life of his stepmother’s younger son Sahdeva because he feels that to be unbiased is his greatest dharma.

Revenge leading to disaster is another major theme in Mahabharata. The first revenge is taken by Amba in the form of Shikhandi which turns into death knell for Bhishma. Draupadi got her revenge when Bheema slays Dushashana in the war. Bheema’s revenge comes in the form of death of Duryodhana. Mahabharata also teaches us that half knowledge is catastrophic as in the case of Abhimanyu, Arjuna’s son. Being properly prepared is one of the crucial steps to success.

All these lessons put together can be a major source of inspiration for the generations to come and they can rely upon them from time to time in life as need be.

Nara, Nārāyaṇa, and the Bhagavad Gita

The Need for a Kshatriya Mindset: Part 3