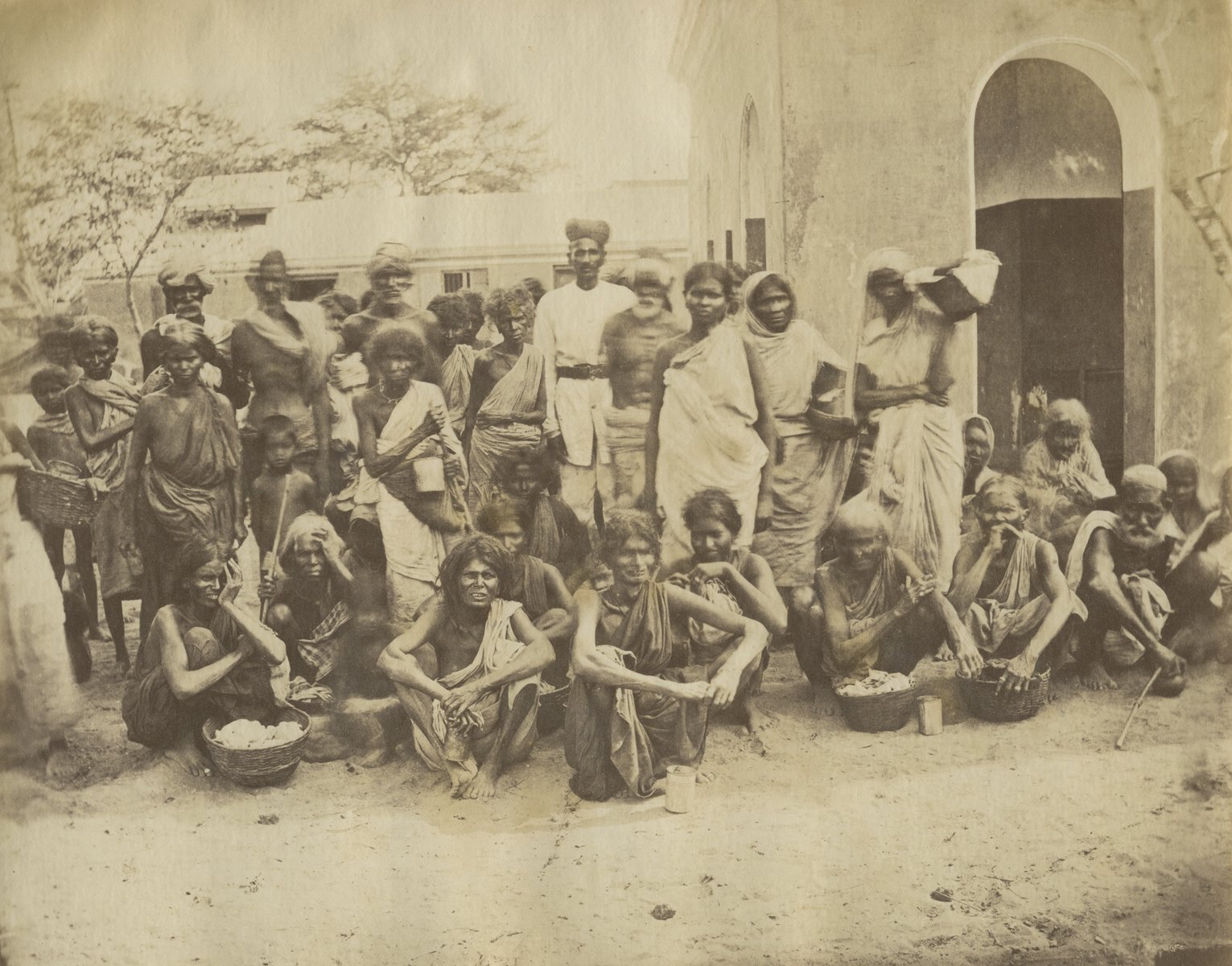 Every single life lost, especially due to hunger, is a tragedy which is completely avoidable, but unfortunately famines were very much a frequent occurring phenomenon in the pre-independence India. Ancient India had fewer instances and the rulers of that time took various measures to provide relief to the affected but, by the eve of Islamic invasions, the frequency of famines had definitely increased.

After the Islamic invasions, the medieval India suffered various famines the intensity of which increased manifolds compared to the earlier times. And it is during the medieval times that we see the start of proper misconducts from the upper echelons of the state. Delhi saw a devastating famine in 1335-1342 but, the Sultan Muhammad bin Tughlaq offered no relief. The Deccan Famine of 1630-32 was even more devastating. Though the Mughal state did take some actions but the fact that almost 7-8 million people lost their lives and the Mughal King, Shah Jahan was busy in spending on the construction of the Taj Mahal, speaks a lot for the seriousness of the effort.

India under the colonialism of the British saw the frequency and intensity of famines increase even further. The desiccation of the farming lands due to frequent droughts, the revenue policy of the British, lackadaisical attitude of the British in which they were not that different from the Islamic rulers of India, all were a contributing factor.

The tragedy of the famine in Bengal in the year 1943 which took the lives of nearly 3 million of its population needs special mention. The reason is not the death toll.  Unfortunately, from the medieval times onwards, India had seen the death toll reaching even 8-11 million during some famines, for example, during the great Bengal famine of 1769-70 and the great famine of 1876-1878.The Famine codes of 1883 enacted by the British did provide some relief, due to which from 1902 until 1943 there was no major famine in India.

That’s why the Bengal Famine of 1943 is so different. The start of famine may have been bad harvests, but the situation was worsened by actions of the authorities involved. Japan’s occupation of Rangoon in March 1942 had cut off the supply of rice from Burma. A cyclone in the October of the same year that hit Bengal destroyed almost 30% of the winter rice crop. Situation was already grim. The trio of Amery(Secretary of State for India) – Linlithgow(Governor General of India) – Herbert (Governor of Bengal) were particularly responsible with the overarching obstinate and racist attitude of Churchill, the British Prime Minister. The policy of “denial of rice” of the Linlithgow headed British government aggravated the scenario by confiscating the surplus rice from some coastal districts in the apprehension of the invading Japanese. Even boats, which were an important part of the transportation and communication of Bengal, were confiscated by the government for the same fear of a probable Japanese invasion.

Now, here comes the very interesting role of Huseyn Shaheed Suhrawardy. An important leader of the All India Muslim League, he was born in a rich Bengali Muslim family and went on to become a barrister in Oxford. After dilly dallying under the Swaraj Party for some time, he became a proper proponent of the two-nation theory of the Muslim League. He went on to become the Prime Minister of Pakistan in 1956-57. He was also the villainous head of the provincial government in Bengal during the ghastly Direct Action Day – 16th August 1946.

But there was another very important post that he held, by the power of which he played a significant role in aggravating the Bengal Famine of 1943. This needs to be cleared that the famine which started with the bad harvests and was exacerbated every step of the way by the British policies, was clearly not Suhrawardy’s creation. But, his very questionable role being in a very significant position needs to be put into light to the readers. His actions though are not very known outside Bengal. And this aspect is what we are going to address in this article.

During the peak of the Bengal Famine, the provincial government was headed by Khwaja Nazimuddin and Suhrawardy was the Minister of Civil Supplies, a very important post during the time of a famine, one would think. Another curious role was of M.A.S. Ispahani of the Ispahani business family of Bengal, but we’ll come to that later.

After being appointed the Governor General of India in 1943, Lord Wavell within a week went to Calcutta to see the tragedy unfolding himself, something which should have been done by Linlithgow. He described his experience in the cable to Amery and Churchill as “Bengal famine is one of the greatest disasters that has befallen any people under British rule..”. He “saw the dying in the streets outside the gates of houses and the glass fronts of the restaurants and bakeries…” In the countryside he saw corpses “scythed down at height of their hunger by the cholera and smallpox and lying in the roads and ditches” a sight which “disturbed him profoundly.”

Lord Wavell accused Nazimuddin for his incapacity, and described him as “exactly the sort of man of whom the corrupt take advantage …Suhrawardy it was claimed siphoned money from every project that was undertaken to ease the famine and awarded  to his associated contracts for warehousing, the sale of grain to the governments, and transportation.”

But what Suhrawardy said about these charges? For him the blame was on Hindus. He said that “he himself had worked his best to establish food kitchens and wanted to punish the black marketeers and hoarders-mainly Hindus”, he was careful to point out with confiscation of their produce. He also said that he went to Delhi many a times for the supply of rice “but found  that Hindus did not want to send rice to a region they saw as largely Muslim.” These are quite outlandish claims considering the fact that Hindus and Muslims were equally getting affected by the famine and the final decision was in the hands of the British who by no means were anti-Muslim. Lord Wavell who levels serious charges against Suhrawardy was not by a long shot, prejudiced against the Muslims. In fact, during Second World War, in his role as Commander -in- chief Middle East, he had very favourable views for the Arab nationalism. So, Suhrawardy’s defence seems quite weak.

Fazlul Huq, previous Premier of the provincial government of Bengal also said that  denial policy of the British had caused the crisis but, Suhrawardy disagreed and “reiterated that there was no shortage of rice in Bengal…The following day the Civil supplies department seized large stocks of rice in Narayangunge, Dinajpur, Bankura, Pabna and Barisal .” The reason given was that the merchants breached the “Food Grains Control Order…having not properly declared their stocks. The public was shaken.” Fazlul Huq quipped that “each time Mr.Suhrawardy made a statement food prices went up.”

In fact when Suhrawardy became the Premier of Bengal in 1946, the sentiments among the Hindus of Bengal were expressed in words of a Bengali who “reported to the Congress High Command as – it is very painful to find the same person who is responsible for taking lives of about four million persons of Bengal in 1943 has again been seen as the Premier of Bengal.” The crisis that had genesis in the bad harvests and the wartime panicked knee jerk reaction of the British was inflamed by the personal misdeeds of Suhrawardy and utter incompetence of Nazimuddin.

Shyama Prasad Mukherjee, a strong leader of the Hindu Mahasabha vehemently criticised Suhrawardy for his misdeeds as the Minister of Civil Supplies. He was “condemned not only for the bungling of the famine relief arrangements, but also for the blatant partiality and disregard for norms of spending public money that he showed in respect of a known Muslim League benefactor called Ispahani.”

This Ispahani played a very important role through which the corruption of the famine supplies was conducted. Born in a rich Bengali Muslim family which owned the M.M.Ispahani Ltd., Mirza Abol Hassan Ispahani, was a Pakistani legislator and diplomat.

The company is a big Bangladeshi conglomerate even today, headquartered in Chittagong. Ispahani held various important positions as a Muslim League member and benefactor. He was also very close to M.A.Jinnah. Infact, a book was even published in 1976 titled “M.A.Jinnah and Ispahani correspondence 1936-48” which showed how he used to apprise Jinnah about the situation in Bengal and keep Bengal Muslim population sympathetic to the cause of Pakistan.

Suhrawardy appointed M.M.Ispahani Ltd. As the Sole Purchasing Agent of the Government of Bengal for the purchase of foodgrains from the neighbouring provinces. The company was supposed to distribute them via rations. “Incredible as it may seem today, Suhrawardy did this without any competitive bidding, without negotiations, without negotiations either with Ispahani or any other agent, without taking the assembly into confidence as if he was dishing out some largesse from his personal funds…Government under Suhrawardy’s orders made an advance of Rs.20,000,000 – Twenty Million or Two Crores of Rupees, a huge sum in those days – to the Ispahani without any contract, without a single scrap of paper.” Ispahanis even refused to “pay any security as demanded by the Government of Bengal”. Such arrangement basically looks like an invitation for no holds barred corruption. With Ispahani as one of the main benefactors of the Muslim League “it should not be difficult to imagine where a part of money went and why Suhrawardy did what he did.”

Dr. Mukherjee also criticized the Ministry under Suhrawardy for “promulgating the price control of rice without making suitable provisions for supply” which aggravated the misery of the people. Dr. Mukherjee gives further points in support of his claims- “ it appears that the Bengal government has been making a profit of 10 Lakhs of Rupees by selling wheat to the hungry and starving people of Bengal at a rate which is much higher than the rate at which it was purchasing in the Punjab. Why is this profiteering on part of the Bengal government at the cost of millions of Bengal’s starving and dying people?More than 4 and half crores of rupees, not from Suhrawardy’s bank account but from public funds have been paid to the Ispahanis”

As has been rightly said that the Bengal Famine of 1943 was a man-made famine, the intensity of which could had definitely been controlled but for “the apathy of an Amery, the cynicism of a Linlithgow, the vengefulness of a Herbert, sick in mind and body, and the ineptitude and the bumbling of a Suhrawardy.”

4.The Life and Times of Shyama Prasad Mookerjee, Tathagata Roy.