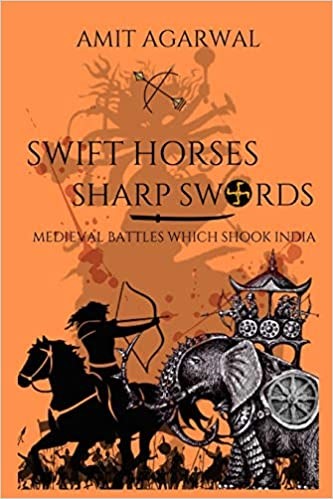 In a recent book on the battles fought in medieval India, titled “Swift Horses Sharp Swords,” Amit Agarwal seeks to offer an objective view of one of the bloodiest conquests of the world. The book begins with ancient India, and how India was the cradle of the world. The book’s focus is on the military campaigns of the early Muslim invaders, starting with invasions by Arabs in the early eighth century and ending with the occupation by Ghori in the 12th century. It critically examines the origins and trajectory of the early Islamic invasions of India.

The book’s initial chapters provide an insight into the rich and vibrant social, economic, and cultural life that prevailed in India during the ancient period. It covers topics relevant to the time such as business transacted through the silk route, commerce in general, exquisite art during the Gupta period, Hinduism and its caste/jati system, the emergence of Buddhism and its spread in the region. The first chapter highlights why everyone should read history, why wars would continue to be waged in the future too, no matter how destructive they become. To know that India wielded quite an influence in the Silk Route in Central Asia and that most of the people in that region were peaceful Buddhists might fill a lot of readers with pride (something which an NCERT history textbook usually fails to do). In just a few generations though, these peaceful followers of the Buddha metamorphosed into ‘mujahids’ who followed a brutal war code, after conversion to the religion from the Arabic desert.

The book then graduates to the medieval period, with the various invasions being vividly described. After the invasion of Arabs started in the early medieval era, the decline of Indian society commenced. The book does justice to the brave Hindu warriors who heroically resisted these invaders.  Most of them like Jaipal, Dahir, Pulkaeshin, and Nayaki Devi are unknown figures from the past for many Indians as Marxist historians have created the perception that the history of India was essentially the history of invasions. The invaders looted and plundered at will and got a free pass. The author successfully corrects this false perception. It is a historical fact that the invaders faced stiff and sustained resistance from Indian kings for nearly five hundred years, before the final collapse towards the end of the 12th century. This stout defense enabled India to protect her religious and cultural identity. In contrast, country after country from the Straits of Gibraltar to the banks of the Indus witnessed rapid Islamization.

The book highlights another little-known historical fact:  how Hindus had significant influence over South East Asia, without being an imperial power. This is not to say that political disputes and wars never occurred. But in most instances, there were no colonial excesses, and the motive was not the imposition of cultural or religious homogeneity. The author devotes an entire chapter towards this and mentions how the Cholas built their empire there, and their emphasis on building intricate and majestic Hindu temples like Angkor Wat, which still attract both ordinary tourists as well as architectural and archaeological experts from around the world.

In the latter half, the book has an interesting chapter on ‘game theory and the survival of Hinduism’. The author, an accomplished engineer, uses tools from his technocratic toolkit (game theory, network models, randomness, etc.) for historical analysis. There is a detailed justification offered for our survival. The author offers the contrast of Abrahamic religions — Christianity and Islam – which became ideological blunt tools for crushing other ancient civilizations like the Greek, the Persian, and the Egyptian. The author offers some interesting conclusions on India’s social, cultural, and religious sustainability. In the end, tabulated and pictorial summaries have been provided, which would provide some ready referencing for readers pursuing these areas of research.

Though most of the history books are written with a prejudiced lens, partial to some source which by its very nature is against the idea of Bharat, it is heartening to note that the author has sought to offer a version of history as it happened, from a Hindu angle, which is the most significant part of “Swift Horses, Sharp Swords”. There are very few historians who tell or have told the story from the perspective of Hindus and this book is, therefore, a welcome contribution to understanding India’s past.  The effort which the author has put in shines through and gives the reader confidence that this work is reliable, even though the author is not a professional historian.

The book also deals with the mistakes and follies committed by Hindus during the medieval period. Despite the riches, Hindus did not pay any attention to the development of technology, including military technology, while the Turks used the same for carrying out major military innovations resulting in them gaining a significant advantage, which subsequently became a major factor in the defeat of Hindu kings despite their bravery.

The book is 500 pages long, and it could have been easily split into two volumes, which would have made it more readable. The illustrations at the start of the chapters briefly summarize the contents of the chapter. The book has the feel of a thriller, and one cannot wait to turn the page, as the mysterious minutiae of history unfold. The information provided is rich and appealing, and the book is littered with interesting anecdotes that every Indian needs to know.

The author, an alumnus of IIT-Roorkee, is a graduate of engineering and law and has about 30 years' information technology experience. He is a Founder Director of a couple of IT firms.