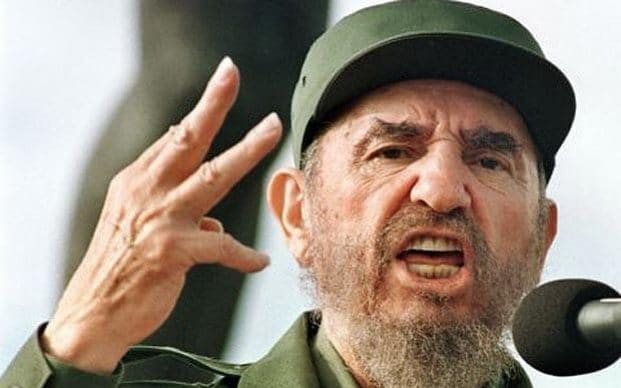 The reaction to Fidel Castro’s passing reminded how slickly, if not always unerringly, dominant nations advance their own sordid interests across the world through control of the narrative. Much like the magnificent King’s College Cambridge choir singing Verdi in unison, the Western media and commentators denounced Fidel Castro lustily. But to ensure the credibility of depicting him essentially as an icon of tyranny, some were careful to damn him with faint praise. There is recognition that Castro brought health and education to the many poor of Cuba, but also a deep-throated wail that he took away their liberty.

There is barely passing mention of the 600 attempts to assassinate him, the CIA sponsored Bay of Pigs invasion and JF Kennedy’s threat of nuclear war to retain the option of keeping Castro and Cuba vulnerable to subversion. Quite obviously there is regret that Cuba’s Dictator Fulgencio Batista, the counterpart of the murderous looter Mobutu Sese Seko of Zaire, did not continue to rule and Castro survived unlike Patrice Lumumba, who was brutally disposed off. This is how Colonel Muammar Gaddafi of Libya was also killed. He was knifed in his rear to cheering whoops from the liberal feminist, Hillary Clinton, erstwhile would-be leader of the free world, who is on record exclaiming: ‘ we saw, we conquered, he died’! Libya is now in meltdown.

The media, university academics, NGOs, the diplomatic corps and so called public intellectuals, usually fetching in appearance and solemn, but of modest distillate, seem to work from a uniform script, originating with the intelligence services and chancelleries. This is how the powerful successfully brainwash the world, insinuating their parochial and self-interested worldview and propagating its assimilation. The powerful sustain their dominance through sophisticated intellectual subterfuge and military prowess, while the weak are condemned to fight each other, played for abject suckers against their own vital interests by the dominant. Virtually every Hindu social science academic in Europe and the US is complicit in the Western project to ultimately ravage India and its Hindu culture. Their personal motivation is mostly the handsome remuneration enjoyed in the US, compared the little they had before they reached its shores, making them wealthy beyond the wildest dreams of the parents.

The Indian media also fails to emulate the primates of the advanced world remaining instead imbecilic centipedes, trampled underfoot in their eagerness for validation and material gratification from abroad. The colonial consciousness of former slaves endures, echoing the narrative perspectives of former masters and their racial betters of the metropolitan world. Virtually every Indian broadcaster abroad is a coolie, faithfully purveying bog standard historic slanders against the civilisation of their ancestors. Despite only being accorded lowly positions, as recent reports about the ubiquitous Hindu-baiting BBC highlight about its hierarchy, the propensity of nominal Hindus broadcasters for the daily abuse of fellow Indians and supposed co-religionists remains unflinching.

In India itself, once Nehru had instituted appropriate mechanisms to hog tie Indian intellectual life, imbuing it with self-denigration, very little of value emerged. Allegedly educated Indian sophisticates did not want to know who they were and produced no narrative of the self to celebrate themselves, in the way Europeans do on a scale that is simply astounding. There is no Indian equivalent of the Times Literary Supplement, or London Review of Books, forgetting the veritable tsunami of doctoral theses and books that enjoin affection and respect for their own society. The endless of a stream of high quality reflection on the self in Europe, America and even China has no counterpart whatsoever in India. Nehru and his mediocre descendants saw to it that it didn’t happen.

The entire cultural and intellectual endeavour of successful nations has a profoundly political counterpart, beyond self-affirmation and inspiration to retain intellectual and political primacy of the nation. The intellectual life of the nation, in its diverse forms, from popular books of history, to constant prideful examination of the minutiae of literature and poetry, is self-consciously promoted as a national mission. Journalists and academics serve their nation even as they instruct the young to be reflexively proud of their national identity and also become professionals in work. And the intellectual class remains forever ready to act as agents of the state, from the hallowed portals of universities to buzzing newsrooms. They provide legitimacy for the national purpose and, whenever the need arises, subvert outsiders through the intellectual assault.

Another critical facet of foreign intervention by dominant powers is their deployment of NGOs, especially religious ones, to intervene in other societies. NGOs are overwhelmingly sponsored by intelligence agencies like the CIA or thoroughly subverted by them for use to achieve national goals. The entire cultural edifice of extending aid across the world through NGOs is a gigantic fraud. Indeed the most shocking discovery is that even renowned international medical charities are fronts of their national governments. It is no surprise the financial accounts of prominent NGOs and charities reveal that only a minor portion of their budgets is spent on actual work in the field and the majority expended on administration. As for foreign journalists, few are uninvolved in gathering intelligence and subversion and a renowned foreign editor of a major British newspaper unashamedly revealed that every one of his correspondents during the early 1960s was a spy!

Fidel Castro got rid of the abominable Fulgencio Batista and the US Crime syndicates he was in cahoots with, oppressing the people of Cuba cruelly. The Cuban revolutionaries sought to make peace with the US, but failed and secured themselves violently instead. They could hardly have survived otherwise. The contrast is with the Brazil, the Dominican Republic and Chile in the subsequent decade, where reformers were removed to the accompaniment of extraordinary levels of violence sponsored by the US government. The critics of Fidel Castro avoid confronting this harsh reality. Nor do they address the unabated contemporary imperialist expansion of the West and its unending history of conquest and genocide, since Columbus reached US shores in the fifteenth century.

Intellectually neuter and calculatedly collaborationist Indians are happy for their own motherland to be ensnared in this miasmic web of desolation. It seems the British have never quite given up the hope of resuming their sway over India. Having been ejected by the threat of armed revolt in 1947, the nineteenth century machination of religious conversion has reappeared as official policy. It involves targeting Hindus and as well as Sikhs as practitioners of ritual discrimination, allegedly akin to the racism of apartheid. The media and entire swathes of British academia have been mobilised to demonise Hindus and their faith. Even two significant Hindu religious orders in Britain have been incited against their own community by offers of assorted bribes to office bearers. The current genocidal mayhem in the Middle East also began with solemn angst to advance democracy and human rights, the modern substitutes for Europe’s’ ancient mission to civilise savages. Civilisation may have indeed been instituted subsequently, although few ‘savages’ survived to benefit from it.