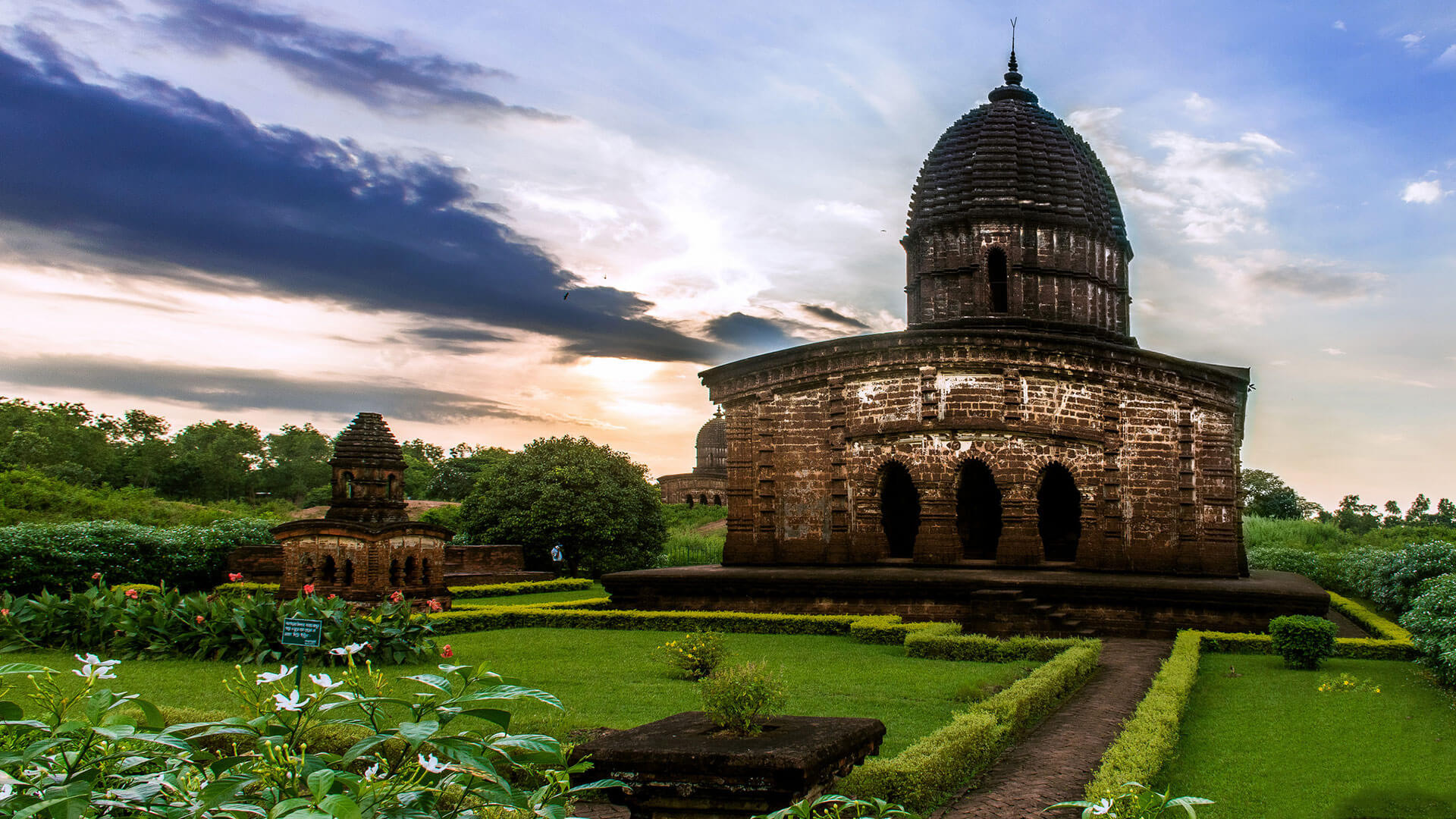 Author’s Note: This is a historical account of events that transpired in the Bishnupur region of Bengal, in the early 18th century. The account has been taken from Fakirnarayan Karmakar’s Bengali book on the history of Bishnupur, titled, “Bishnupurer Amar Kahini”.

The term “sati,” in an age guided by the principles and norms of incorruptible and self-righteous “gender” and “social justice,” conveys the image of a helpless damsel in distress being consigned to the flames, against her will, by a psychotic and inhumane mob of religious fanatics. Beneath this carefully constructed atrocity narrative surrounding sati lies something that does not quite fit into this neat picture. This is the phenomenon of women — real women, not “mythical” figures — sacrificing their lives not only in respect of the memory of their dead husbands, but also for the cause of their country or civilization. Many of them remain ignored by mainstream historiography; yet, the role they played in offering brave resistance to invaders or plunderers and also in protecting the honor of their clan or lineage makes us bow down to them in respect even today. No wonder, such women deserve to be fittingly worshipped as “Sati Devi” in mandirs across our country.

One such woman was Devi Chandraprabha, the Queen of Bishnupur. She was described as “Patighatini Sati” (the sati who killed her husband). While the term itself seems oxymoronic, we will try to understand here how that is not so. This is her story — the story of a brave queen who went against all odds to defy her husband and save the honor of her subjects and Dharma.

Bishnupur was a Hindu Kingdom in erstwhile Bengal (Bankura District of present-day West Bengal) from c. 700 CE-1760 CE. It was at the apex of its military, political, and cultural glory during from c. 16th century to 18th century CE, when it was a nominal client of the Mughal Empire. Our story starts in the 1690’s, when the Mughal Empire, under Emperor Aurangzeb, was in the midst of a full-blown revolt from all sides — Marathas, Sikhs, Jats, the Ahom, etc. In such a chaotic scenario, many zamindars or mansabdars also rose up in revolt. In Bengal, the Zamindar of Chetua-Barda (present-day Medinipur), Shobha Singh, allied with the Afghan Nawab of Odisha, Rahim Khan; their objective was to set up their own kingdom in Bengal and overthrow Mughal authority. They launched raids and expeditions throughout the regions west of the Hooghly, and as a result the entire region of Bengal was in a deep sense of shock and terror. Repeated Mughal attempts to quell the rebellion, led by Governors like Ibrahim Khan and Aurangzeb’s own grandson, Azim-us-Shan, failed. In this scenario, it was just a matter of time before the prosperous kingdom of Bishnupur would also be attacked. However, that was not to be.

Raghunath Singha Dev II had ascended the throne of Bishnupur in 1702 CE. He was not only an astute administrator but a great military strategist as well. He planned his moves well and managed to defeat the combined forces of Rahim Khan and Shobha Singh’s son, Hemant Singh (Shobha Singh had been killed by then). Chetua-Barda was reduced to a rubble. Shobha Singh’s daughter, the protagonist of our story, was Rani Chandraprabha. She was taken to Bishnupur after her family’s defeat, but was respected as a royal princess. Finally, she was married off to Raja Raghunath Singha Dev and thus became the Queen of Bishnupur.

However, the seeds of the impending tragedy had already been sown: the forces of Rahim Khan were defeated and subsequently even Rahim Khan was killed; the army of Bishnupur looted the treasury of Shobha Singh and brought along with them the widow of Rahim Khan — Begum Sahiba Lalbai. She was well trained in music and dance. Raghunath Singha Deb was a gentleman and thus he did not disrespect Lalbai in any way. Acceding to Lalbai’s request, he allowed her to stay in the kingdom. He even had a house constructed for her outside the citadel.

Soon, the signs of the grave mistake that the Raja had committed began to be apparent. Raghunath Singha Dev started spending most of his time in Lalbai’s home, listening to her music. He was a great connoisseur of the art and valued music very much; he is in fact credited with the establishment of the Bishnupur Gharana of Hindustani classical music. At this moment, however, his love for music led to his downfall. He became captivated by Lalbai’s beauty so much that he started neglecting his state duties. Lalbai, as usual, used the Raja as an instrument for her own machinations once she realized that she had him under her thumb. The people of Bishnupur, once they realized what was happening, became restive and signs of an impending storm started gathering. Gopal Singha Dev, the Raja’s younger brother, was asked by some of the prominent subjects and ministers to become the Raja. Before Gopal Singha could even think over it, the machinations of Lalbai forced him to go into hiding. The situation had indeed become very serious.

As destiny would have it, a son was born to Lalbai out of her relation with the Raja. The Raja till then was without an heir. So Lalbai realized the powerful position she was in and started hatching a conspiracy. She asked the Raja to organize a feast on the occasion of the birth of the child, similar to what Hindus do through the samskara of Annaprasana. At that festival, she wanted a Muslim cook to prepare the food — which would then be fed to all the people in the capital city. She knew that for Hindus, this would be an act of sacrilege, leading to the loss of caste and their ultimate conversion to Islam. Through this act, she hoped to legitimize her position as a Muslim Queen in an otherwise Hindu Kingdom. The Hindu subjects of her lover would not have accepted her under normal circumstances.

Raghunath Singha Dev, by this time, was totally under her grip. He lost all sense of reason and went along with her decision. As the order for the feast came, the people of Bishnupur became scared. They could not openly defy the king, but they would not compromise on self-respect either. So, many started leaving the city in droves. Gopal Singha Dev was forced to come out of hiding but even he was confused and helpless in this situation. It was in such a dark hour that Rani Chandraprabha came forward to avert the danger. She instructed the royal officials that by any means the dharma of her subjects should be protected.

While the common people were reassured by this news, both Lalbai and the Raja became very angry. Raghunath Singha Dev summoned his officials but none of them came before him to report as to why such a decision had been taken. Even the royal court was empty. Realizing the hand of the Rani behind this, he went inside the royal Andarmahal to deal with her. The Rani was waiting on the roof. Raghunath saw her there and warned her of the dire consequences of defying his decision. Chandraprabha repeatedly requested him to withdraw the decision. When all reasoning failed, she chose the last and most brutal option — for the sake of her Desha and Dharma. Through a visual cue she gave her officials the order to kill the Raja — to assassinate him. The Raja, before he could realize it, was struck by arrows and he saw some people approaching him as well, with weapons in hand. He tried to run but fell from the roof and died after being injured by a deer trap in the royal grounds used for hunting. The conch shell of Dharma started sounding the music of victory.

As the news of Raghunath’s death spread, there was a feeling of calm all around. But just as people thought that happiness had returned to Bishnupur, another tragedy struck them. The pious and saintly Rani Chandraprabha defied everyone’s requests and jumped into the funeral pyre of her husband. That is why she came to be known as “Patighatini Sati” — the Sati who killed her husband. The people of the city now were mad in their anger and sadness. They demolished Lalbai’s house and drowned her in a pond that was built beside her newly constructed house. Other sources suggest she committed suicide herself. In 1898, this pond was excavated and from it emerged Lalbai’s skeleton, her Persian style cutlery, as well as her ornaments. The Lal Bandh (reservoir) that still exists in Bishnupur was built for her and in her name by Raghunath Singha Dev.

Till this day, the memory of these incidents survives in Bishnupur. The dilapidated remains of Lalbai’s residence can be seen, and near to it is a Kali Temple. To the southwest of the Kali temple, one can still find the Sati-Kund; the place where Rani Chandraprabha became Sati. It is surrounded by agricultural land, but no one dares to connect the kund area with the fields or cultivate in that specific zone. Muslim farmers who did not believe in the Sati legend and tried to do that had to pay with their lives. Even today, the kund remains as it is.

Devi Chandraprbha’s sacrifice and heroism stands as a source of inspiration to Hindus in these beleaguered times when our culture and civilization is under renewed assault.

Sukrit Banerjee earned a BA in History from St. Stephen’s College, Delhi, in 2020, and is now working toward earning an MA in History from Jawaharlal Nehru University, Delhi. He is also trained in Rabindra Sangeet and Hindustani Classical Music. He writes on matters of history, law, politics, and current affairs.