The Need for a Kshatriya Mindset: Part 2 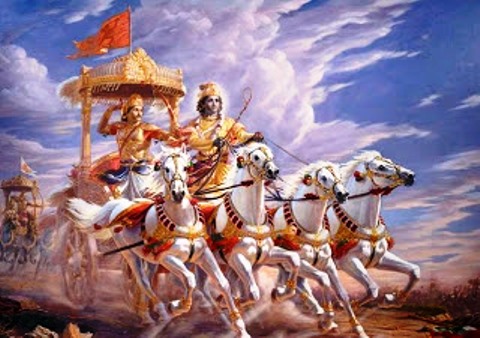 We must all meditate on the image of Krishna and Arjuna on the battlefield, because this promotes something that is sorely needed in our community today, a Kshatriya mindset: that is, the proper values and attitude of a Kshatriya. Kshatriya means holder of Kshatra (that is, rule or authority). Kshatriyas are not just warriors—they are political leaders, they govern and rule. Most of our Puranas and Itihaasas are about the lives and doings of the kshatriyas, because they are really the ones who shape, lead and govern our society, the ones who perhaps have the most direct impact on human history. They are the guardians of the people; their swords and shields protect our culture, our religion, our traditions, our lives and our very civilization. Hinduism has survived for so long in large part because of the valour and sacrifice of Kshatriyas like the Rani of Jhansi, Chhatrapati Shivaji, and others.

We find very few true Kshatriyas—either physical or intellectual Kshatriyas—in Hindu society today. There are many people who at least aspire to be Brahmanas, to dedicate themselves to austere lives of renunciation and spiritual practice. There may not be a whole lot of true Brahmanas, but least the Brahmana ideal is well-understood and sought after. Certainly, there are many Vaishyas, or those dedicated to the art of creating and redistributing wealth. There are also a fair number of Shudras, those who are in the field of service. But there are precious few who are real Kshatriyas, and this is especially lamentable at a time when Hindus desperately need Kshatriyas.

Hinduism is under siege today on multiple fronts. Today, scores of temples are being ravaged and destroyed in West Bengal in India on a daily basis. Hindus are being routinely beaten, raped and killed by Muslim fanatics in Bangladesh and Pakistan. Conversions seeking to destroy Hindu culture and Hinduism’s hold over India are growing by a staggering amount and are often accomplished through foul means. Nor is this a problem confined to India alone. In America, Hinduism is attacked, wrongly portrayed and castigated in academia as an oppressive religion that must be weakened or radically reformed. Media portrayals tell the same story. The marketable aspects of our traditions are being recast as non-Hindu phenomena, like yoga, meditation, etc., thus looting Hinduism of its market share in the marketplace of religions. This is why so many of us do feel the stigma of being Hindu. This is why so many of us do not want to identify ourselves as Hindu, so through this form of “soft” warfare in the West, Hinduism here, too, is weakening under constant attack.

There is an ever-growing pattern of atrocities and attacks against Hindus and Hinduism that continues on unchecked. Our enemies know they can get away with it because hardly anyone stands up forcefully and in a principled way to champion the cause of Hindus. If we cannot find our Arjuna in our midst, then we must ourselves become Arjunas.

This is not to advocate extremism or the taking up of arms. Instead, the simple fact here is that politics matters, that we have to live in the world of realpolitik and learn how to thrive in this world to protect and preserve the treasures of our spiritual heritage. Else they will be looted and destroyed. No one will stand up for us unless we stand up for ourselves. We do not have the luxury of running away from this dharma-kshetra.

This is the whole point of Krishna’s lesson to us.

As Hindus, we must take up a Kshatriya mindset; this does not mean necessarily a military mindset. It means we must not shy away from politics. We must understand the world around us; we must learn to think tactically. We must build strong alliances with other communities who will stand together with us. We must learn how to be powerful diplomats and ambassadors. We must develop leadership skills and learn how to accumulate and wield power, not for ourselves but for the greater good. We cannot become Krishna, but we can learn from the wide array of roles he played and the toolbox of tactics that He used.

It is important to have courage, to have conviction, to never back down from what must be done, to never compromise our principles. We must live and breathe the ethos of what Swami Vivekananda expressed so eloquently: “Arise, Awake, and stop not till the goal is reached!”

There is one concrete example in this context. A few months ago, there was a controversy at Wharton, the famous business school at the University of Pennsylvania. Narendra Modi, Chief Minister of Gujarat, potentially the next Prime Minister of India, a staunch Hindu leader and a controversial figure in some circles because of discredited allegations regarding his role in the Muslim-Hindu riots in Gujarat around a decade or so ago, was first invited to be a speaker at a prestigious India business forum that Wharton hosts annually and then was unceremoniously disinvited because a few radical Marxist, non-Wharton professors protested his invitation.

I won’t go into the specifics of the incident, but I’d like to make a few observations. I was involved in organizing a rally held in front of Wharton to protest against the rescinding of Modi’s invitation. I was involved in trying to recruit people to get involved, especially disheartened to see how few people in our community were engaged on this issue, especially those within the student community, since, at heart, this was a college campus issue.

I do not mean to say that I think everyone should have supported holding a protest or joining the protest. There is definitely room for reasonable people to differ on how this incident should have been addressed. But I do think that people were remarkably ignorant and apathetic about what was actually going on here, the various forces at play and the important geopolitical ramifications of the incident for us as Hindus and/or as Indian-Americans or even as minorities in this country. I do think that, on the whole, even our community leaders have not taken the time and effort to do their homework, to educate themselves about how this incident fits into a larger pattern of anti-India / anti-Hindu moves in academia. This ignorance and apathy plays into the hands of those who are anti-Hindu and, by not engaging in these issues, we become complicit in the attacks upon us and our faith. The ramifications of the Modi incident are not about Modi himself, just as the war that the Pandavas fought was not ultimately about the Pandavas themselves—it has a direct impact on our standing in this society, our freedom of expression and association, and our ability to build a strong Hindu leadership for our community without undue interference.

Developing a Kshatriya mindset means taking all these factors into account, thinking strategically and tactically about the long-term implications and stakes, not acting out of fear or dejection, being proactive rather than reactive, and then taking a reasoned and principled approach. This did not happen with respect to the Modi incident and a thousand other such incidents that occur routinely, the net effect of which is the weakening of our community and religion. We need to educate and engage, and we need to develop a Kshatriya mindset.

If we educate and engage, then there could have been a higher quality of discussion and debate than what took place and a better outcome. If, as a community, we develop a Kshatriya mindset, there will be better discourse, better engagement and better activism on such issues. That will make us a stronger community and that will strengthen Hinduism.