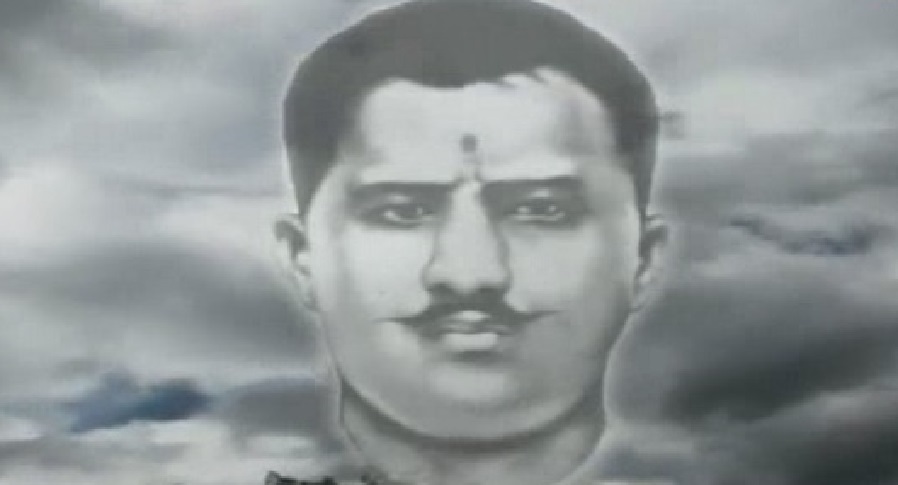 ‘His poetry is also a lamp lighted at the altar of the Mother land,’ was what author N.P.Shankara Narayan Rao said about Ram Prasad Bismil’s writings.Ram Prasad Bismil, also known as Pandit Ram Prasad Bismil was one of the most popular revolutionaries of India, famous for participating in the Mainpuri conspiracy of 1918, and the Kakori conspiracy of 1925. Besides being a patriotic rebel he was also a prolific poet and wrote in Hindi and Urdu using the pen names Ram, Agyat and Bismil, Bismil being the most popular name.

Ram Prasad Bismil was born on 11 June 1897 to Murlidhar and Moolmati at Shahjahanpur, in the then United Province, British India, (present-day Uttar Pradesh). He learnt Hindi from his father at home and was sent to learn Urdu from a moulvi. He was admitted to an English-language school, despite of his father’s disapproval.

Ram Prasad Bismil’s father was an employee of the municipality board of Shahjahanpur. However, what he earned was insufficient to meet the basic requirements of his family. Due to this Ram Prasad Bismil had to leave his studies after the eighth standard. However, his knowledge of the Hindi language was profound and this helped him to continue with his passion of writing poetry. As a result of his family’s stagnant lifestyle, Bismil spent more time loafing around then doing anything worthwhile. But that was all about to change.

Bismil was greatly influenced by the principles of the Arya Samaj. This led to heated debates between him and his father Muralidhar. The debates reached such a point that Muralidhar turned his son out of his home. Bismil moved about for two days in a nearby forest and later returned to Shahjahanpur. Then the young followers of the Arya Samaj came together and established the Arya Kumar Sabha and began to arrange meetings and processions. The district officials feared that this might lead to violent agitations. So the government banned meetings and processions. The elder Arya Samajis were also dissatisfied with these youngsters. At that time, Swami Somadevji, a leader of the Arya Samaj, came down to Shahjahanpur and got acquainted with Bismil. Swami Somdev advised Bismil on matters of religion and politics, making the young rebel more informed.

At the age of eighteen, Bismil read of the death sentence passed on Bhai Parmanand, a scholar and companion of famed rebel Har Dayal. At that time he began attending the Arya Samaj Temple at Shahjahanpur where Swami Somdev, a friend of Paramanand, was residing. To express his anger, Bismil composed a poem in Hindi titled Mera Janm (My Birth), which he showed to Somdev. This poem demonstrated a commitment to remove the British control over India.  On reading the poem, Somdev blessed Bismil who then spoke of his vow to liberate India. Somdev commented ‘It is easy to take a vow but hard to keep it.’ Bismil replied ‘If I have the grace of these sacred feet my vow will surely be fulfilled; nothing can come in the way.’

The following year Bismil and his friends travelled to lucknow where the Indian National Congress was to have its annual session. By that time, the Congress was split into two groups. One group was that of the liberals who were opposed to any direct action against the British Government and believed in securing justice by explaining India’s difficulties to the British Government. They also believed that India should continue to be a part of the British Empire. The other group was that which believed in directly opposing the British Government. Bal Gangadhar Tilak was their leader. Tilak was expected to participate in the session and so his group had gathered in large numbers. But the liberals being in a majority in the Reception Committee did not make any elaborate arrangements to welcome Tilak.

But Bismil and his young friends desired that Tilak should be taken in a procession through the city. This led to a confrontation between Bismil’s group and the Reception Committee. The members of the Reception Committee and Tilak himself tried to discourage them but they would not budge. In the end Bismil and his friends hired a coach. Tilak was made to sit in the coach and was taken in a procession. The same group also published a book in Hindi on the history of American independence titled America Ki Swatantrata Ka Itihas. This book was published with a fictitious name of Babu Harivans Sahai, B.A. and its publisher’s name was given as Somdev Siddhgopal Shukla.

Gaining popularity due to his activities, Bismil formed a revolutionary organisation called Matrivedi and contacted Pandit Genda Lal Dixit, a school teacher at Auraiya. Dixit was in touch with some powerful dacoits of the state. Dixit wanted to utilise their power in the armed struggle against the British. Like Bismil, Dixit had also formed an armed organisation of youths called Shivaji Samiti named after Shivaji. The pair organized youths from the Etawah, Mainpuri, Agra and Shahjahanpur districts to strengthen their organizations.

On 28 January 1918, Bismil published a searing pamphlet titled Deshvasiyon Ke Nam Sandesh (A Message to Countrymen), which he distributed along with his poem Mainpuri Ki Pratigya (Vow of Mainpuri). This caused them to be pursued by the police. When the police team almost got hold of him, Bismil jumped into the Yamuna and swam underwater making the police think he died. On 1 November 1919 the Judiciary Magistrate of Mainpuri, B.S. Chris announced a punishment sentence against all accused and declared Dixit and Bismil as absconders.

But the British policy took a different turn post First World War, when cases against the rebels were withdrawn which made Bismil return to Shahjahanpur.

In 1921, Bismil along with Prem Krishna Khanna, and the revolutionary Ashfaqulla Khan attended the Ahmedabad Congress. There Bilsmil along with Maulana Hasrat Mohani got the proposal of Poorna Swaraj passed in the General Body meeting of Congress. Gandhi, who was not in favour of this proposal became quite helpless before the overwhelming demand of youths.

Bismil then mobilized the youths of United Province for non-co-operation with the Government. Bismil and his group strongly opposed Gandhi in the Gaya session of Indian National Congress over his decision to call off the movement post the Chauri Chaura incident, and they formed a revolutionary party under his leadership.

Bismil requested the old allies of Dixit, the dacoits, to rescind their activities of looting their own countrymen. At this point of his life Bismil wrote several books:

In 1923, with the help of famed rebels of Bengal, Sachindra Nath Sanyal and Dr. Jadugopal Mukherjee, Bismil formed the Hindustan Republican Association. The basic name and aims of the organisation was unveiled on 3 October 1924 at Kanpur under the Chairmanship of Sachindra Nath Sanyal, where Bismil was declared the District Organiser of Shahjahanpur and Chief of Arms Division. An additional responsibility of Provincial Organiser of United Province (Agra and Oudh) was also entrusted to him.

As a member of the HRA, Bismil executed a detailed plan for looting the government treasury carried in a train at Kakori, a village near Lucknow. The plan was executed on 9 August 1925 when ten revolutionaries stopped the 8 Down Saharanpur-Lucknow passenger train at Kakori.

Ashfaqulla Khan, the lieutenant of Bismil engaged himself to break open the cash chest. More than forty revolutionaries were arrested as those completely unrelated to the incident were also captured. The government appointed Jagat Narain Mulla as public prosecutor while the defence committee formed to defend the accused had luminaries like Govind Ballabh Pant, Chandra Bhanu Gupta and Kripa Shankar Hajela. Following eighteen months of legal hassling, Bismil, Ashfaqulla Khan, and other rebels were sentenced to death.Bismil was hanged on 19 December 1927 at Gorakhpur Jail.

Thus ended the life of a great poet, rebel, revolutionary, patriot and freedom fighter. Along with Chandrashekhar Azad, Sachindra Nath Sanyal and Lala Lajpat Rai, Bismil was one of Bhagat Singh’s main inspirations. Bismil’s poems acted as motivation for his fellow revolutionaries. Among them, the most popular Sarfaroshi Ki Tamanna is reproduced below: