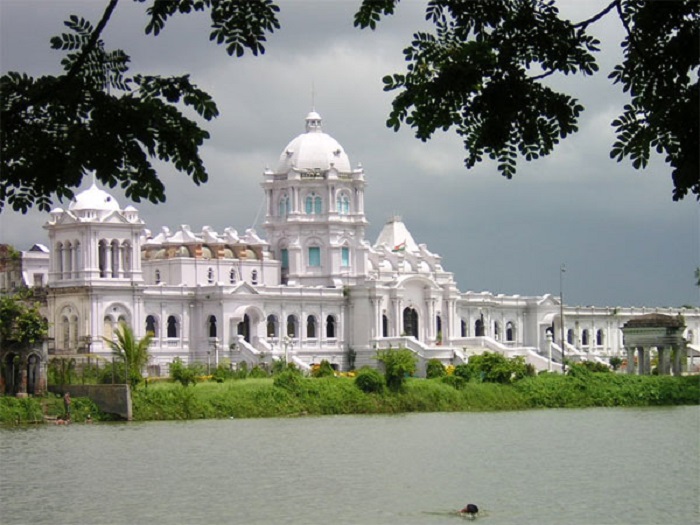 Tripura is one of India’s North-eastern states. It is bordered by Bangladesh on three sides, with only the western part connected to India. The state figured prominently in the works of Nobel Laureate Rabindranath Tagore, and the erstwhile Kingdom of Tripura and one of its rulers Maharaja Birchandra. The Maharaja himself was an accomplished painter, composer of music and a scholar of Vaishnava literature.

Via Rabindranath Tagore, Bengal and Bengali culture influenced Tripura, especially the ruling family. But the connection does not end with Rabindranath Tagore. It extends to the present day, but with tragic interludes in between.

The present Chief Minister of Tripura, Manik Sarkar, is also a Bengali. Unlike the erstwhile Left Front in West Bengal, there are no allegations of corruption against Sarkar, a CPI-M leader. Even his opponents concede that he is a clean and capable administrator who has played a key role in finishing insurgency in the state.

Tripura was recently in the news for one notable and positive news—the lifting of the Armed Forces Special Powers Act (AFSPA). This led to demands that similar steps be taken with respect to Manipur and Jammu and Kashmir.

Tripura—A Brief Walk through its History and Geography

The origins of the kingdom are available in the mythology written in Rajmala, the chronicle of the Kings of Tripura, which meanders from Hindu mythologies and Tripuri folklores.[1]

Rajaratnakar, the oldest State Annals, endorses the fact that King Bavru conquered the countries up to River Baitarini in Orissa adding a portion of Burma to his kingdom. He also brought the “sea (Bay of Bengal) under his control.” King Bavru also attended the Aswamedha Yajna of Emperor Dasharatha of Ayodhya.

The historical chapter of the Royal line of Tripura, known as the Manikya Dynasty, actually began with the reign of Maharaja Maha Manikya, who ascended the throne in 1400 CE. Maharaja Maha Manikya was the first ruler who started ruling the State with the Royal title of Manikya. The long period of over 547 years saw 35 kings rule the kingdom of Tripura. The last king, Maharaja Bir Bikram Kishore Manikya Bahadur reigned for the period from 1923 to 1947. He was a versatile and farsighted king who died on 17 May, 1947. The royal kingdom of Tripura merged with the Indian Union on October 15, 1949. It became a “C” state in the Indian Union.

Immediately before Partition, the then Regent Maharani Kanchanprava Devi got wind of a conspiracy to merge Tripura with East Pakistan. An Islamic party, the Anjuman-e-Islamia, as described in contemporary intelligence reports, was the mastermind behind it. Its leader Abdul Barik, alias Gedu Miah, a rich contractor, had managed to win the support of some key nobles in the palace for his plans. But strong resistance by all political parties and organizations linked to them foiled the move as the Regent Maharani, Kanchanprava Devi signed the Instrument of Accession.

A Council of Advisory was appointed by the President of India to advice the Chief Commissioner. Under the Act of State Reorganization, a Territorial Council was set up consisting of 32 members, including two nominated members. In July 1963, the state territorial council was converted into the legislative assembly.

The Partition and impact on Tripura

Partition indirectly affected the state very badly. Before Partition, tribals constituted the majority of the population. Seeking to escape the violence and to save their lives, Bengali Hindus from erstwhile East Pakistan (present day Bangladesh) began flooding the state. This influx, which was continuing, again picked up when the Bangladesh freedom movement began and Pakistan launched a crackdown, especially conducting a genocide against the Hindu Bengalis of then East Pakistan. This influx continues even today, with the addition of Bangladeshi Muslim migrants, who enter India for economic benefits. In the words of noted journalist Subir Bhaumik,

‘The final partition of Bengal in 1947 was a disaster for Tripura. It opened the floodgates of an influx from East Bengal that forever changed the demography of the erstwhile princely kingdom. This demographic change paved the way for a fierce ethnic conflict that has ravaged the tiny state for the last two decades. The independent kingdom also lost its direct geographical link to the Indian mainland and this isolation stunted possibilities of its rapid economic growth despite the availability of key resources like natural gas.’

The following table which gives the numbers noting this demographic change, is revealing.

The demographic change, though unintended and due to the Partition, also led to a loss of political power for the tribals.

The then undivided Communist Party of India (CPI) considered Tripura as one of its “base areas” for an armed struggle. Both the Congress and the Left tried to utilise different ethnicities as political vote banks.

In 1967, the year the communists lost both the Parliament seats, two political groups surfaced in the tribal areas. The Tripura Upajati Juba Samity (TUJS) was born with the slogan ‘Kachak koofoor chung chia, buni tala tanglia’ (We are neither white nor red but we are for the tribal cause). The TUJS challenged the communists in the tribal areas, constantly out-radicalising the communists on tribal issues. The second group, the Sengkrak (Clenched Fist), a tribal militant outfit, first surfaced in North Tripura. Already facing growing Congress support among Bengali refugees, the Communists now met a strong challenge from the TUJS and tribal militant groups like the Sengkrak (and the Tripura National Volunteers-TNV and the National Liberation Front of Tripura-NLFT that followed it) in the tribal areas. [4]

The Baptist Angle or “Tripura for Christ”

The NLFT was born in 1989 with the backing of the Baptist Church of Tripura. The NLFT raised the slogan of “Tripura for Christ”. It used the gun to evangelise Hindu tribals, and forbid Tripuris from worshipping Shiva, conducting Durga Puja, and Saraswati Puja. The NLFT also targeted Hindu religious leaders and RSS workers, killing them.

In 1999, the Church banned Durga Puja and Saraswati Puja. Their manifesto said they wanted to expand “The Kingdom of God and Christ in Tripura.” In April 2000, Nagmanlal Halam, the then secretary of the Noapara Baptist Church in Tripura, was arrested with a large quantity of explosives.

The NLFT would stop at nothing to make its dream of “Tripura for Christ” come true. Despite the prohibitions it imposed on Hindus, and the calculated targeting of Hindus, the mainstream media by and large chose to keep quiet on this issue.

Tripura is one of the success stories in North-east India. The state managed to beat back insurgency and defeat the insurgents.A combination of administrative measures, economic measures, and police action culminated in the state overcoming insurgency. The Manik Sarkar government backed the administration in their efforts to break the backbone of insurgency. He backed the administration to the hilt. Tribals were also given a stake in the state’s political set-up. Economically, the encouragement given to the cultivation of rubber played a major role in giving the boost to the economy. Most might be unaware, but rubber cultivation is a major economic component of Tripura’s economy.

The state police and central police organisations, popularly called paramilitaries (CRPF etc.), must also be commended for their role. Unlike other North-eastern states, the army was not used in Tripura. The state police used both orthodox and unorthodox measures to root out the insurgency and beat the insurgents. Apart from orthodox policing, the state police also used unorthodox methods to beat the insurgents. The insurgents were targeted at their camps in Bangladesh and even in Dhaka by intelligence operatives. The police and Tripura State Rifles also adopted a Hearts and Minds approach. Anyone interested in the role of the police in beating the insurgency can read the Book Tripura Bravehearts by a former Tripura DGP. Tripura was actually one place where the police followed the present Defence Minister Manohar Parrikar’s dictum of using a thorn to take out a thorn.

[2] Short history of pre-historical and historical of Tripura by tripuraassembly.nic.in