Why Varna is Not Caste 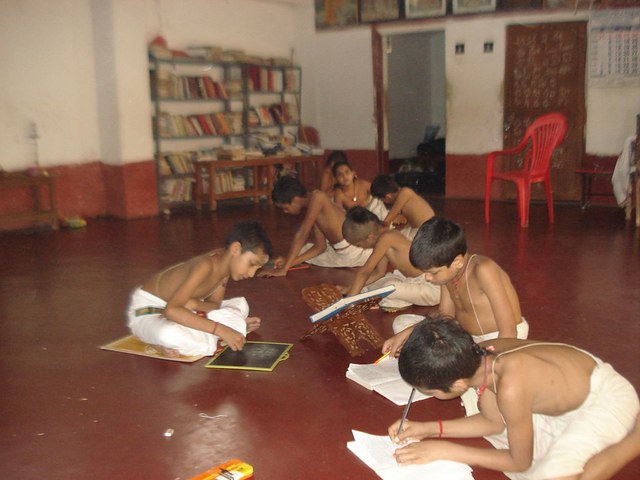 The Four Varna system of ancient India was originally based upon the idea of an organic social order that remains relevant today. What is called caste today should not be confused with it.

The Vedas arose five thousand years ago, when human society was rooted in nature. The Vedic Rishis deeply contemplated the processes of nature and the universal consciousness behind it. Out of this basis, they devised Yoga, Vedanta, Ayurveda and the foundations of Indian or Bharatiya civilization.

This Vedic view of life required developing a model of society in harmony with nature, in which humanity’s cultural and spiritual potentials could both unfold. Like other Vedic disciplines, the Vedic approach to the social order was many-sided and multileveled, yet rooted in an underlying unity. It did not propose one artificial rule or formula for everyone, but aimed to reflect the intricacy, harmony and abundance of all life. It did not seek to impose social unity from above via authority, dogma or institution, but sought to develop it in an organic manner, according to our natural cooperative ventures with one another.

Basis of the Four Varnas

Out of this Vedic contemplation of nature, the Vedic idea of a social order arose as the Four Varna system. The term Varna refers to qualities and inclinations called gunas in later thought. The Four Varna system is first clearly explained in the famous Purusha Sukta of the Rigveda X.90.12, perhaps humanity’s oldest book. The hymn describes the entire universe in the form of a human being, a Cosmic Person called the “Purusha”. The human social order is based upon it:

These four Varnas represent the qualities of energy that all people naturally possess. They are not separate or conflicting occupations, but part of the same unitary social fabric.

There is in this original Vedic model no outcaste, Dalit or untouchable. Each Varna constitutes a necessary part of the whole and all are mutually interdependent. Each is a manifestation of the same Divine consciousness working in humanity.

This original Vedic concept of “Varna Dharma” reflects an ecological model of society that is universal. Those who look at Varna in terms of caste oppression have not examined its origins, but only look at later distortions, in which the true Vedic spirit was compromised.

The Vedic social order was meant to instill an intrinsic feeling of unity in each individual with the greater society, and human society with the greater universe. The Varna system was based upon a transcendent ideal of human unity in the Divine, not an effort to give power and domination to one section of society.

Varna as our Human Capacity

This Vedic model tells us that each human being has the capacities of all four Varnas or human types; just as we all share the same type of human body and its different limbs. Each person is potentially a Brahmin, Kshatriya, Vaishya and Shudra. We all perform these four roles to some degree. Each person functions as a guide to some people, a protector of others, a provider for others, and does service for yet others. But some degree of specialization also occurs, with individuals often assuming a preponderance of one of these roles for most of their adult lives.

This organic concept of the social order is not one of superiority, much less domination, but reflects a deep appreciation of the interdependence and mutual interaction out of which life operates.

It is not possible to have a society in which each individual can perform all necessary social roles, any more than it is possible to have a body in which each limb can perform all bodily functions. Evolution in society depends upon the differentiation of roles and professions that arise out of the four basic Varnas. Stability in society depends upon recognizing a common human potential behind all social roles and interactions.

To some extent, all human societies reflect this fourfold order. Every society has its head in the form of intellectual and religious leaders. It has its arms or police and military classes. It has its legs or merchant class. It has its feet or those in service occupations. Older societies worldwide, including Europe up through the nineteenth century, had similar social orders of priests, aristocracy, merchants and common people, remnants of which can be found in many countries today.

Yet the Vedic view looks beyond all outer social concerns in its examination of human life. The Purusha Sukta begins and ends with a lauding of the Cosmic Person, with the human social order as a secondary topic. It states: “The Purusha is the entire universe, what has been and what will be.” (Purusha evedam sarvam yad bhutam yaccha bhavyam, Rigveda X.90.2). All beings constitute only one-quarter of the Purusha, with three-quarters remaining immortal in the realm of light beyond (Rigveda X.90.3). All human beings are manifestations of the same Cosmic Being, which is present in every person, regardless of status of birth. This is the Upanishadic recognition of the Universal Self, Atman or Purusha – the Pure Consciousness that both pervades the entire universe and dwells in the hearts of every creature.

The Hindu Varna system has a unique yogic orientation beyond outward class divisions. The Vedic goal of life is the realization of Cosmic Consciousness within the individual, for which the practice of Yoga and meditation is prescribed – which includes detachment from the outer goals of life. Varna is meant to aid in the individual process of Self-realization and not become an end-in-itself. To reach that Universal Self one must give up identification with any social group.

The goal of a Vedic life, achieved through the practice of Yoga and meditation, requires going beyond worldly desires to a state of inner freedom (Moksha) and union with the Cosmic Person or Purusha. This Hindu social goal of Moksha is very different from western social orders that exist for the fulfillment of worldly desires, emphasizing social, political and material gains. It is also different from the ordinary religious goal of going to heaven, which is based upon a continuity of the ego and human identity, not a realization of the Universal Self within us.

The capitalist model that dominates the world today is such a desire-based materialistic social order that is ignorant of our deeper consciousness. While capitalism provides outer freedom, it follows an external view of reality that blinds us to our inner nature, and gets us caught in the pursuit of enjoyment that inevitably ends in sorrow and death.

The biggest problem for all social orders is determining the place and aptitude of each individual within it. For the Vedic Varna system, there is the additional complication of determining the spiritual or yogic aptitude, not just outer skills.

The bane of the social order all over the world is that social status has been usually determined by birth to the neglect of all other factors. This has resulted in oppression of individuals and groups simply because of their family of birth, regardless of their actual capacities or merits. This status by birth gained prominence in India long ago, distorting the original Varna system, and causing people to forget its organic and spiritual basis. Our birth family indicates the important karmic foundation of our lives, but it is a place that we start from, not necessarily where we should end up.

One’s family of birth can be an important factor for determining the profession a person naturally belongs to. Obviously, it is more likely that a good musician will arise from a family of musicians, where he can be trained from early childhood, rather than from a non-musical family. Yet many exceptions to this rule exist and birth is often misleading, and by itself not sufficient to determine individual capacity. The child of a great musician may not be good at music at all.

How then do we recognize an individual’s true place in the social order? This requires a proper policy of education and testing, and providing the necessary learning space for each individual to flower, with a degree of healthy competition. Creating a society that honors the aptitude of each individual, but also follows a higher rule of Dharma and the development of consciousness above material impulses, entails a great deal of effort, attention and dedication. It necessitates recognizing great gurus and yogic teachings that can guide our lives beyond mere social, economic and political concerns.

Limitations of Caste in India Today and the Way Forward

Those who belong to the four Varnas in India today may not practice their traditional Varna Dharma. Like everywhere in the world, the business class predominates and social status is largely based upon wealth.

We should not look at India’s current caste makeup as representing the original four Varna system, or its current caste problems as caused by the ancient Varna order. The problems of India’s caste system are the same as those of social inequality everywhere in the world, rooted in ego, money and power, not in the yogic values and dharmic practices.

India’s caste system today consists of various clans and extended families (Jatis), whose members may follow diverse occupations. There are untouchables and outcastes, who still suffer a great deal of oppressive caste discrimination. Caste conflicts today are not limited between Brahmins and lower castes, but occur among many different classes and clans vying for prominence. While the social support that extended family groups provide can be helpful, it becomes harmful, when it stereotypes individuals by family affiliations and creates rigid clan or regional identities that undermine national unity.

To go forward as a country, India should respect the ecological and yogic core of the Varna system, but reject its later distortions, including caste by birth, with human unity and Divine unity, not mere family status and distinction, acting as the foundation of the social order.

We must remember that our consciousness is the same Self or Atman in all. It is only our outer functions and activities that vary. We must learn to honor that Self in all the Varnas. Otherwise, we remain trapped in ego-consciousness and do not understand the deeper teachings.

An enlightened reformulation of the Varna system will produce a new social order different from both what we see in India and from the current western social model. The basis of this new dharmic society must be Karma Yoga – action based upon selfless service and a sense of the unity of all humanity and the entire cosmos. It must allow the individual to flower in his or her true capacity and encourage entrepreneurship at all levels, but with a sense of responsibility for the whole of life. Developing such a new dharmic social order requires deep exploration, profound research, new thinking and innovative insight.