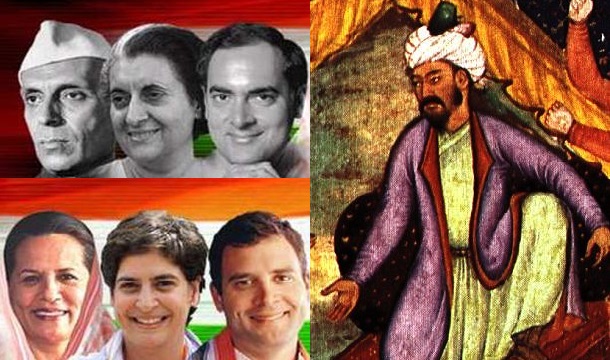 Internet is a great forum. It allows us to probe many unexplored and partially explored events by joining the dots to arrive at the truth or rebut the falsehood. Unfortunately it has also become a source of false news!

One interesting episode revealed by umpteen bloggers on Internet is the mystery of every generation of Nehru-Gandhis since 1959 visiting the Mazar (tomb) of Babur in Kabul. It is amazing that the Indian historians jocularly labelled ‘Munshis’ by the Hindu ideologue Sita Ram Goel, have failed to connect several dots of our post-independence history. Their biggest failure has been the omission to explore and expose why Babur’s grave continues to beckon every generation of the Dynasty aka Nehru Gandhis!

Equally remiss has been the mainstream media. The scribes and columnists, too, failed to notice that the following scions of the Dynasty representing every generation from Pandit Nehru onwards to Rahul Gandhi have visited Babur’s grave, ostensibly to pay obeisance to the founder of the Mughal empire :

Time has come to question Rahul Gandhi aka Janeudhari Shiv Bhakt, why every generation of Nehru Gandhis has been visiting Babur’s grave in Kabul since 1959? Why must they pay obeisance to the murderer of lakhs of Hindus and plunderer of our temples ? Why must, even today, Zaheeruddin Babur, the destroyer of Sri Ram temple in Ayodhya, continue to beckon and inspire the members of Nehru-Gandhi dynasty ?

The episode of Indira Gandhi bowing for a few minutes in silence at the grave of Babur in 1968, mentioned by Natwar Singh, did cause some commotion among Hindu blog writers, but not of the mainstream English media. However, the visit of Rahul Gandhi and the Dr Manmohan Singh in company of the then Foreign Minister Natwar Singh to Babur’s grave in August, 2005, did receive some attention of the media. According to the correspondent of Chandigarh-based daily The Tribune, on being questioned Rahul Gandhi said that “the Press was reading too much into his visit to Kabul with Prime Minister Manmohan Singh” and dismissed the allegation that he was seeking to derive political mileage from his visit to the Afghan capitlal.5 The Tribune story mentioned that Rahul Gandhi accompanied the Prime Minister almost everywhere, including the Presidential palace and Babur’s tomb in Bagh-e Babur. It further added that the External Afffairs Minister Natwar Singh and National Security Adviser, M K Narayanan, seemed to be answering the question that Rahul was asked.

The surprise of surprises was that no media guru tried to join the prominently visible dots of the repetitive visits of four successive generations of the Dynasty to Babur’s grave in Kabul! Is it due to the Dynasty’s secret affiliation with Mughal marauders? The searching comments about fascination of Nehru-Gandhis made by inquisitive bloggers like Rita Gupta, Arushi Bahugana and Ramadhir were ignored. No one questioned Natwar Singh about his intelligent understanding of Indira’s bowing before the dead Babur. Did it point to some secret affiliation with the notorious invader ? Nor did any investigative journalist question the accidental Prime Minister Dr Manmohan Singh that who prompted him to add a visit to Babur’s grave in his iterinary in August 2005 visit to Afghanistan. Was it Rahul Gandhi, or was it just a brainwave which enthused the imagination of former Prime Minister? Being a Sikh he could not have been an ardent admirer of Babur whose tyranny has been condemned forcefully by Guru Nanak. An Oxford-educated scholar like Dr Manmohan Singh could not have added the visit to Babur’s grave to his Afghanistan iternary without being prompted by some heavy weight politician (read Rahul Gandhi).

According to Pandit Nehru his forefathers were Kashmiri Hindus and that his great grandfather was Pandit Raj Kaul who had migrated to Delhi in 1716 on the invitation of the then Mughal ruler, Farrukhsiyar and that his grandfather, Gangadhar Nehru, was the Kotwal of Delhi? But that claim is without any proof. As a rule, Muslim rulers appointed only Muslims as City Kotwal, never ever a Hindu. Farukhsiyar was an extremely cruel ruler who wanted to crush the Hindus and convert all of them to Islam! He was responsible for the capture of Banda Singh Bahadur and bringing him to Delhi along with speared heads of scores of gallant Sikhs and Hindu followers of Guru Gobind Singh. The Moghul ruler took fiendish delight in torturing Banda Singh, including 700 Sikh soldiers. He even slaughtered his innocent son. It is highly unlikely that Farrukhsiyar would invite a Kashmiri Hindu to come and settle in Delhi.

Ever since Natwar Singh disclosed the secret of Indira Gandhi bowing before Babur’s serious doubts arose in the minds of many intellectuals, including some bloggers, about the origin of the Nehru dynasty. And that led to an alternative narrative of the Muslim ancestry of the family. In a blog titled ‘Hidden Facts About The Nehru-Gandhi Dynasty, posted on the website of speakingtree.in it was claimed that the Nehru dynasty’ founder was a Muslim nobel, Ghiyasuddin Ghazi (meaning kaffir-killer), who was the Kotwal of Delhi before the uprising of 1857. But historically there was never any tradition of appointing a Hindu as City Kotwal during Mughal era– and that too of Delhi which was capital of the Muslim rulers. According to alternative history, Ghiyasuddin Ghazi, not Gangadhar Nehru, was the Kotwal of Delhi in 1857. After capturing Delhi the British started hunting and killing Muslims all across Delhi and sons of Bahadur Shah Zafar were beheaded by them. In Delhi there is place near Darya Ganj which to this day is called ‘Khooni Darwaza”. That infamous epithet was given to the place because hundreds of Mughals were killed or hanged at that spot by the British soldiers.

It is said at that time the city Kotwal Ghiyasuddin Ghazi ran away from Delhi along with his family fearing capture by the rampaging British troops. He was allegedly intercepted by the British soldiers at Agra because he wore the attire of a Mughal nobleman and looked like a Muslim functionary. But he managed to dodge them and escaped by claiming that he was a Kashmiri Hindu whose name was Pandit Gangadhar Nehru. This fact has been elaborately explained by a scholar, M. K. Singh, in the 13th volume of the ‘Encyclopedia of Indian War of Independence’(ISBN:81-251-3745-9), published in 2009. M K Singh is the well-established author of six books. No one ever contested what M K Singh wrote in his well researched tome nearly a decade ago.

In his autobiography Babur admits that his most important goal was to kill the Hindus and spread Islam across the Hindusthan. In Tuzuk-e Babri he boasts of his fondness for killing the kaffir Hindus and building towers of their heads.

The sordid story of Babur’s barbarity has been copiously narrated by Guru Nanak in Babur Nama. In the first shabad of Tilang Rag Guru Nank laments the “great sorrowful condition of women” caused by depravity of lustful invaders subjecting them to cruelty.6 (Source: Postcard. news, Rita Gupta, ‘The real face of the Mughul emperor Babur which no history book will tell you’). Similarly Arushi Bahuguna pointed out that in Third Shabad, Raag Asa, Mahala Ik, Ashtapadi Ghar 3, Guru Nanak described in detail how Hindu women with plaits of black hair were humiliated by shaving their heads and nooses were put around their necks to torture and insult them.7 (Source: Postcard.news, Arushi Bahuguna, ‘The real face of Babur which no history books will tell you!’

The candid blogger highlights the fact that thrice Babur’s tent had to be moved to a higher level because the ground became clogged with the blood of the bodies of kaffirs slaughtered by his troops.

It is remarkable that none of the Nehru-Gandhis ever cared to visit the grave of Prithviraj Chauhan located in Ghazni, some distance away from Kabul. This wilful omission of the Nehru-Gandhi dynasts not visiting the dilapidated grave of the valiant Hindu king Prithviraj Chauhan has remained a forgotten chapter of the Dynasty’s Babur-loving narrative. Most Indians (read dumb Hindus) don’t know that the ‘grave’ of Prithviraj in Afghanistan is visited by the locals even today to vent their anger for his killing Muhammed Ghori, 900 years ago says E. Jaiwant Paul in his book, “Arms and Armour: Traditional Weapons of India”. Jaiwant Paul wrote that on the outskirts of Ghazni are two domed tombs. The larger one is of Muhammed Ghori and few meters away is the smaller tomb of Prithviraj Chauhan. What Paul saw during his visit was shocking. He writes, “In the centre of the second tomb was a bare patch of earth where the actual grave should have been. Hanging over this spot from the top of the dome is a long, thick rope ending in a knot at shoulder height. Local visitors would grab hold of this knot in one hand and stamp vigorously and repeatedly with one foot on the bare patch in the centre of the tomb,” wrote Paul, a weapons collector. On seeking an explanation, he learnt that the Afghans still stamped with their feet on the grave of Prithviraj because he had killed Ghori, 900 years ago, for which reason they hate Prithviraj Chauhan.

The hidden reasons for Dynasty’s contempt for the Hindu king and love for the Mughal tyrant Babur are two important questions which require in-depth research. It is time that the Indian Council of Historical Research undertook this important project!

I rest my pen by quoting the fictional detective James Bond. In the famous novel ‘Goldfinger’ penned by Ian Fleming, James Bond says, “Once is happenstance, twice is coincidence. Three times is enemy action”.. It is for the reader to assess what should we call the fourth time coincidence! Shall we call it the hyper-history of the Hindu history?

Origins of the Moghul Tyrants of India