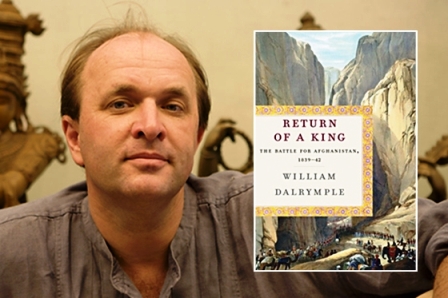 Behold! The direct descendant of Major General Sir John Dalrymple of North Berwick, 5th Baronet, a great soldier known for his cruelties in Madras Presidency, and the direct descendant of Sir John Warrender Dalrymple of North Berwick, 7th Baronet, the judge in a court in Bengal known for his focus on profits, and the son of Lord Lieutenant of East Lothian Sir Hew Dalrymple, 10th Baronet, the self-important William Dalrymple, is now waging a great battle against Dina Nath Batra, a “native,” who has dared use the courts and police against a member of Dalrymple’s tribe!

I first stumbled upon the writings of William Dalrymple on the internet a few years ago and contacted him as I was concerned by the unscientific claims he passed off as historical truths. In particular, I took exception to the following words.

“Indeed a decade ago when the miraculously undecayed body of St. Francis…”

I explained to him that neither the dead body of Francis Xavier nor that of Vladimir Lenin was undecayed. On a related point about other claims in the Bible, Dalrymple’s response was bizarre. He presented the “four Gospels plus Josephus” as sources for historical evidence. Since the Gospels were part of the Bible, his point was that the Bible was evidence for the Bible!

Clearly, Dalrymple was not familiar with the methods used in researching history. Nor did he seem familiar with even basic facts. Ordinary information such as the similarities between Islam and Christianity excited him like new discoveries about everyday events excites a small child.

Another point of contention was Dalrymple’s description in which the historical truth of “Saint” Thomas and his alleged miracles were treated as open questions.

“In Kerala, St Thomas is said to have converted the upper caste Brahmins with the aid of miracles and to have built seven churches. Whatever the historical truth…”

At some point Dalrymple flaunted his degrees to refute me. “Actually, Arvind my friend,” he bragged, “I have a top first in history from Cambridge (currently rated ahead of Harvard as the best university in the world) where I was the senior history scholar.” And then he sent this link and this link in order to persuade me that his college degree was from the world’s top-ranked university.

Dalrymple also bragged that he had some honorary doctorate degrees. Being from a long line of barons must have helped him. After all, no British university has conferred honorary degrees on any Black person or Muslim for peddling religious myths as historical facts.

Curiously, Dalrymple never talks about the massive wealth that his family has accumulated by plundering India. Here is some information published in 1872 giving some clues about the size of this loot. William Dalrymple’s direct ancestor, John Warrender Dalrymple, was a judge who was paid a huge sum of 37,992 silver rupees per year when every ounce of silver was worth a sixteenth of an ounce of gold. That is a whopping 27.69 kilograms of gold per year since each silver rupee weighed 11.66 grams. This amount does not include bribes he may have received to rig lawsuits. This particular Dalrymple was in India for thirty years. That is just one Dalrymple. There were other looters in the family including a Dalrymple in Madras whose job was to kill Indians. Given this background, William Dalrymple’s massive sense of entitlement should surprise no one.

Another characteristic of William Dalrymple seems to be his discomfort in going against the myths peddled by the church. He appears to be a Catholic who fears the wrath of the Pope if he commits blasphemy. The fact that his brother has been a Roman Catholic priest may explain this behavior. This also lends credence to the view in some quarters that the ban on Salman Rushdie from the literary festival at Jaipur stemmed from Dalrymple’s opposition to blasphemous speech and the announcement about Rushdie’s speech was merely a publicity stunt.

Dalrymple blamed Muslims for this purported fiasco. After all, a British Lord could never be wrong. Had the police prevented Rushdie’s speech from happening, Dalrymple and his cohorts could have declared themselves martyrs whose free speech rights were suppressed. As things turned out, Jaipur’s Commissioner of Police called his bluff by telling him that Rushdie’s televised speech could be shown and the police would keep things under control. Read what Dalrymple admitted in London’s Guardian newspaper.

“[The Jaipur Commissioner of Police] was quite clear: the videolink could go ahead…

But equally, can you justify going ahead with a literary event, however important, if you know that you will thereby be putting at risk the lives of everyone who attends… as well as knowingly igniting a major religious riot…” [emphasis added]

This reasoning sounds like the government’s excuse for banning books and is not consistent with the beliefs of a person interested in the right to the freedom of expression.

Opposition to Indians seeking legal recourse is a recurring theme for Dalrymple. He objected to the lawsuits filed against MF Husain despite the fact that Husain was once part of the government machinery that silenced the voice of other Indians.

On the other hand, when he wanted to silence the voice of Farah Damji – a lady of Indian descent with whom he had a falling out – the legal system was supposed to help him bully and silence her. Apparently, someone with the moniker “Ms Equaliser” had sent out emails about Damji and Dalrymple. Dalrymple suspected Farah Damji and complained to the police. Dalrymple also complained to the police when Damji showed up at a literary festival in Rajasthan.

The immense sense of privilege harbored by the son of former Lord Lieutenant of East Lothian Sir Hew Dalrymple is astounding. Perhaps he believes that Indians are still slaves who should serve the British. Maybe he will soon demand that police stations and courts in India go back to the time of his father and keep out Indians with signs that say, ‘Dogs and Indians not allowed.’