World Hindu Conference 2014: A monumental achievement and a civilizational awakening 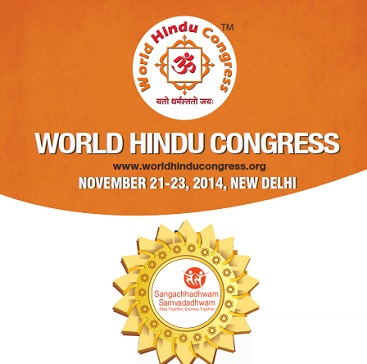 It was a great achievement indeed for Swami Vigyananand of the Vishwa Hindu Parishad (VHP) to gather 1800 delegates from more than 50 countries of the world under one roof. For the sheer scale of organising such an event, Swami ji and his team deserve our heartfelt applauses. The place was teeming with delegates from around the globe and some very colourful attires and headgears made it look more like a spirited carnival of Hindus around the world.

As a delegate, there were very significant lessons to be learnt which are shared in the rest of this piece.

The good thing is that an awarenesses and concern for Hindu causes is gradually taking roots in the Hindu consciousness. Unfortunately, some of the narratives of Hindus all over the world is laced with the oft-repeated vagaries of pacifism, sarva dharma sambhaava, and accommodating the Abrahamic faiths which are converting and/or killing Hindus in large numbers. This narrative has to be shifted 180 degrees.

Hindu awakening as of date is like a tardy yawn of a Python. Each one of us has to awaken our vital energies and give muscle and fangs to this Python to combat the aggressive monotheistic ideologies, to recall the late Sitaram Goel.

[pullquote]The sacred land of Bhagavad Gita and the Upanishads cries out to Hindus to rise out of the self-induced sloth and tamas dipped in the mumbo-jumbo of impotent Ahimsa to reclaim their rightful place in the world order.[/pullquote]

Hindus are spread all over the globe. These are very courageous people who are sticking to their faiths amidst huge adversities which they face daily. The strength of these Hindus is directly proportional to the strength of Hindus in Bharat. So, whether we like it or not, Hindu resurgence in the entire world is going to happen and be sustained here in Bharat, the land where it sprung from and flowered. The stronger we are here, the safer will be our brothers in the rest of the world.

To most of Hindu leaders, terror is still an abstract entity and must be countered philosophically instead of physically. Any talk of physical opposition to aggressive Abrahamic faiths is met with extreme scepticism by Hindu organisations and lay Hindus alike. I am willing to be proven wrong on this account.

[pullquote]Hindu awakening as of date is like a tardy yawn of a Python. Each one of us has to awaken our vital energies and give muscle and fangs to this Python to combat the aggressive monotheistic ideologies, to recall the late Sitaram Goel.[/pullquote]

The interesting happening is that the average Hindu who has woken up wants to respond organically, but lacks the requisite leadership to do so. This is not to generalize all organizations but events over the last decade at least have revealed this pattern. Hindu leaders are being selectively murdered in Tamil Nadu , Uttar Pradesh, West Bengal, Orissa and Kerala, but the Hindu leadership does not even talk about it, leave alone resisting it.

A change in the Hindu vocabulary has to happen now.  Using Hindu names and symbols in day to day life is a must to establish Dharma in our children. We are children of  Bharatavarsha and we will call our motherland as Bharata. These small changes will go a long way in instilling dharmic values and practices in our psyche. The shrinking mental and physical space of Hindus should awaken each one of us out of slumber and set tangible goals to relcaim our Dharma and land.

Hindus for the last 800 years or so have faced the biggest disaster that has damaged Dharma especially in the post colonial era. In spite of being the most accommodating faith/religion/philosophy across the globe, we are everywhere put on the defensive about our dharma and mediocre and even dangerous philosophies end up encroaching the dharmic space, both physically and intellectually.

However, in our own time, the intellectual capital of Dharma is definitely on the upswing. So many bright minds drawn from various fields such as business, medicine, journalism and other professions are today standing up for Dharma. We must build on this to give a forceful voice to Hindu causes worldwide—else the Hindu cause will be lost in the clutter of the conflict with the Abrahamic faiths which control the levers of public discourse.

In this, we are fortunate to live in an age where the Internet has come as a big boost for Hindu causes.

Left to the main stream media (MSM), Hindus will be annihilated in the coming decades. From 22 per cent, Hindus are today reduced to one per cent in Pakistan, and from 35 per cent to seven per cent in Bangladesh. One hears of similar stories all over the globe.

[pullquote]However, in our own time, the intellectual capital of Dharma is definitely on the upswing. So many bright minds drawn from various fields such as business, medicine, journalism and other professions are today standing up for Dharma.[/pullquote]

The leftist liberal grip over the MSM has ensured a well-orchestrated genocide of Hindus while the world and fellow Hindus move on with life as usual. In many cases, devoid of any support from Hindus, fellow Hindus are forced to convert in shame or are murdered in cold blood in these hostile nations. It is mind boggling that a media that should go radioactive on the murder of a Muslim techie in Pune should completely obliterate the news of murders of Hindu leaders all over India.

Thanks to the internet, information is no longer the domain of a few media houses. At a click of a mouse, we come to know of the 12 year-old Kajal Bheel kidnapped in Pakistan, or a temple torched in Bangladesh. More and more Hindus have to be brought on to the Internet. This has to happen on a vast scale to educate fellow Hindus about the atrocities that stare at them if they don’t get their act together now.

If we can get a RSS Pracharak elected as the Prime Minister of this great nation by the power of social media, we can certainly save our Dharma by a more comprehensive and effective use of social media.

At the WHC, it was established beyond reasonable doubt that Jains, Sikhs and Buddhists are the part of the all-encompassing and inclusive Hindu umbrella. It was extremely heartening to see their representatives at WHC mingling freely with Sanatani brothers and standing united in their opposition to the Abrahamic onslaught. All in all , it was a great opportunity to witness the churning that is happening in the Hindu thought worldwide. Although we have miles to go before we rest, a seed has undoubtedly been sown at the WHC.

The sacred land of Bhagavad Gita and the Upanishads cries out to Hindus to rise out of the self-induced sloth and tamas dipped in the mumbo-jumbo of impotent Ahimsa to reclaim their rightful place in the world order.

We will not encroach on someone else’s land and faith but we will not yield an inch of the most sublime thought that mankind has ever known. As with anything that is beautiful, Sanatana Dharma is a flower which needs brilliant and courageous rishis to sustain it, and selfless kshatriyas to protect it from darker faiths. The children of Dharma will rise to protect it with their very lives if need be. They have the eternal Dance of Shiva to guide them and the Buddha will forever smile upon them…

A Daoist Interpretation of Gandhian Thought and Dharma