Yoga has a religion: it is Hinduism 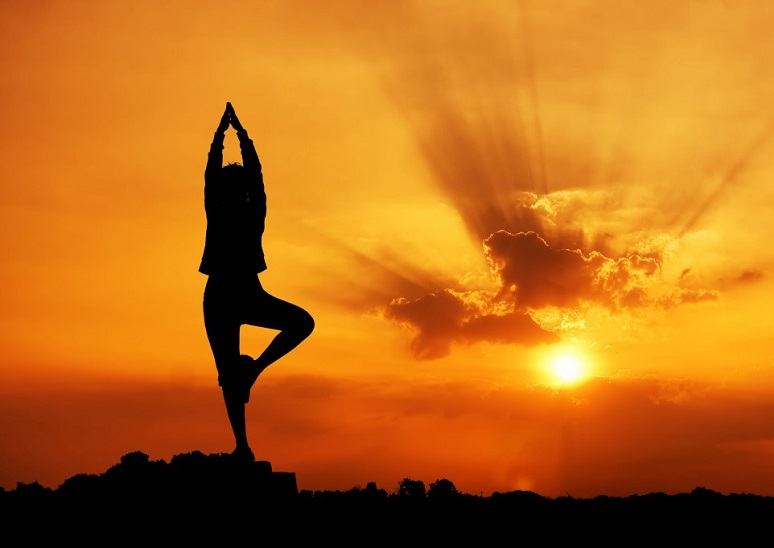 My immediate response to the assertion that ‘Yoga has no religion’ is a flat denial. Because I know Yoga, Yoga is a friend of mine and I can truthfully attest to the fact that Yoga does indeed have a religion. He’s a Hindu. Therefore anyone making the claim that Yoga has no religion is either ignorant or is a liar (maybe both) since it is categorically and emphatically false. Do I make myself clear?

Oh, they mean the practice of yoga, the set of physical and mental exercises that originated in India and is widely used across the world for improving physical and spiritual well-being? Well, well, then let me address that ‘Yoga has no religion’ claim. Spoiler alert: it is a stupid, meaningless statement made by the congenitally ignorant demonstrating a mentally disabling but well-deserved inferiority complex.

‘Yoga has no religion’ belongs to a category of statements that are syntactically sound but semantically empty like the statement ‘Colorless green ideas sleep furiously.‘ (Briefly hold the cursor over the link for a reference. Always a good idea to do so.)

The statement is indeed well-formed and has the usual English subject-predicate structure with ‘Yoga’ as the subject and the predicate ‘has no religion.’ And unless the subject refers to a human being (real or imaginary), the statement is semantic nonsense: it is neither true nor false. Meaningful statements are either true or their converse is true. Consider the statement ‘Cars have no possessions.’ It is meaningless because neither it nor its contradiction is true. People have possessions; inanimate objects don’t.

Cars can be possessions, however. Or a car may be abandoned and therefore have no possessor. Cars can be possessed but cars do not possess. That distinction is important and worth keeping in mind if one is interested in not coming across as an imbecile.

Yoga is a technique (I am not referring to my aforementioned friend who has a PhD in material science, not spiritual science), a way of doing or thinking about things just like modern science, or motorcycle maintenance, or psychoanalysis, or minimalism, or gymnastics, or terrorism. All of those things are not people. Only people have the capacity to understand, believe in, and profess ideologies such as a religion. Thus it is meaningful to say that James has or does not have a religion. If James is a self-identified atheist, one can truthfully assert that ‘James has no religion.’ But saying ‘Material science has no religion’ is revealing asininity.

A related cretinous statement to ‘Yoga has no religion’ is ‘Terrorism has no religion’ — usually made by the same retards. Terrorism is a technique or a strategy, not a person. A terrorist is a person. Therefore a terrorist can be said to have or not have a religion. Thus, for instance, when a terrorist asserts that he is following the commands of Allah as revealed to the prophet of Islam and preserved in the Islamic holy book the Koran, and kills innocents as he blows himself up, it makes sense to say, ‘the terrorist is a Muslim’ but it makes no sense to say ‘Terrorism has no religion.’

Those statements are just plain abuse of language. One does not have to take a course on general semantics or become an expert on Korzybski’s thesis to stop misuse of language. I argue for the proper use of language, and basic sanity in general.

Anyway, let’s get back to yoga — note the lower-case ‘y’. Yoga is a technique that was developed in India centuries ago, and belongs to Hinduism (and its theological off-springs such as Buddhism and Jainism) in the sense that those who created it self-identified as Hindus (regardless of whether they used the word ‘Hindu’ or ‘Sanatana dharma’) and is preserved in the sacred scriptures of what is known as Hinduism. All of yoga’s ancient practitioners have been Hindus and only in modern times, have non-Hindus started using the technique. Practicing yoga does not make one a Hindu. But merely because non-Hindus or non-Indians can (and do) practice yoga does not alter the fact that yoga is a Hindu tradition and its provenance is entirely Indian.

Let me use this analogy. I love bhajans. I love Buddhist chants. I love Christian sacred music. Mozart’s ‘Requiem in D minor‘ or Bach’s ‘St Matthews Passion’ or Handel’s ‘Messiah’, move me to tears. That music is absolutely, distinctly Christian. My appreciation of it does not make me a Christian, and the fact that non-Christians can relate to the music does not uproot the music from its Christian ground. Music does not have a religion but different religions have different musical traditions. Meerabhajans are Hindu; Tibetan chants are Buddhist; Gregorian chants are Roman Catholic.

Yoga is Indian and more specifically Hindu in that sense. Hindu sacred texts contain its principles; Hindus were its principal authorities; Hindus, and only Hindus, practiced it for centuries. The yoga asanas such as the Surya Namaskar are Hindu practices. Wikipedia notes, ‘Its origins lie in India where its large Hindu population worships Surya, the Hindu solar deity. This sequence of movements and asanas can be practised on varying levels of awareness, ranging from that of physical exercise in various styles, to a complete sadhana which incorporates asana, pranayama, mantra and chakra meditation.’

Indeed, many prominent Muslim and Christian authorities have issued religious edicts prohibiting their coreligionists from doing yoga. These people are quite understandably wary of yoga — it is a Hindu practice and is more than likely to ‘corrupt’ them. Yoga is a gateway, a mechanism, a means, a road to reaching enlightenment. Enlightenment is a uniquely Indian spiritual goal. Unlike in the Abrahamic religions which focus entirely on pleasing a monotheistic god who demands absolute obedience, the Indic religions’ goal is liberation or moksha, the removal of the illusion that one is not the Supreme Being.

Spiritual advancement, not obedience to some super-big-daddy-in-the-sky, is the goal of yoga. Etymologically, yoga is a cognate of ‘yoke’ — to unite, to bind. The idea is to yoke yourself to the ultimate principle behind the universe, the universal consciousness. Yoga is essentially about mind and its control. And if one starts with the physical bits, who knows whether one will gravitate towards the non-physical bits. And that would not be very good for the proselytizing religions.

You may ask, what brought on this rant. Well, wonder no more. It was this tweet:

No sir, yoga is an integral part of Hinduism. Yes, it may be practiced universally but it is and will remain Hindu. Get used to it. I guess it sucks for you but you just have to suck it up.

[Free language lesson thrown in: ‘Suck it up’: Idiom — to accept whatever calamity, pain, suffering, anguish or whatever unpleasantness is occurring (and stoically endure it).]

I am not familiar with Shahid Siddiqui’s work but I have a hunch that he may have claimed ‘Terrorism has no religion.’ Bombs have no religion too. Nor do planes, and automobiles. Come to think of it, my derrière has no religion, too. So what.

(This was first published on the author’s blog)