2019 General Elections: The Fight for number 2 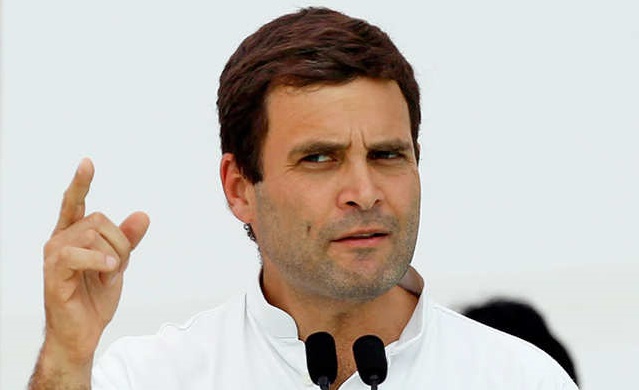 Are you perplexed by the fact that Congress is not in alliance in UP? Or that they will be fighting against TMC in Bengal? Or why it allows people like BK Hariprasad who claim that Pulwama attack was ‘Match Fixing’ between Modi and Pakistan? Or why someone like Divya Spandana is running party’s SM campaign? There is a reason to it.

Congress is not trying to win 2019 General Elections! It’s trying hard not to finish a distant 3rd behind Third Front! And hence it is targeting a specific niche Hindu vote along with Muslim and backward caste votes. Congress dreads the situation where it ends way behind a post-poll coalition of non-NDA regional parties (SP, BSP, TMC, TDP, AAP, etc). In other words, if BJP falls short of the halfway mark, Congress does not want to be caught in a situation where there is no option but to support a PM from ‘Third Front’. Instead of this it will prefer a BJP government!

Now the question is why will the Grand old party (GOP) allow BJP to walk over? Well, because it fears that in going for top spot their lies a huge risk of ending with too few seats. In cricketing parlance, it’s something like on a seaming wicket, a team targeting 300 in 50 overs, ends up scoring 175. Continuing with cricket analogy, Congress knows it’s not playing on Ferozshah Kotla against an Indian Attack of 80s or 90s but rather the current India bowling on Perth or MCG. And if that happens it will be left with no option but to support Mayawati or Mamata. (Remember Deve Gowda, Inder Kumar Gujral and Chandrashekhar Govts?).

To understand why Congress is fearful of the Third Front let us cut back to 1980s. In 1987, it was VP Singh, who when made Defence Minister started investigating Defence Deals, which brought the Bofors scandal out, leading to his expulsion. Post which, he went on to form Janata Dal, defeated Rajiv Gandhi and led a Government himself in December 1989. Till this time, barring the exception of 1977, Congress never clocked less than 40% vote and 200 seats. In 1989 elections it got 197 seats with a vote share of 39.53 %. Since then, it has been not able to reverse the slide. In seven elections in last 30 years, Congress won more than 200 seats only twice. And had been in opposition for 13 years. Quite a dismal record for a party which ruled India 36 years out of 39 till then.

But when Congress was in opposition, it was BJP which was ruling. Then why am I saying that it’s the Third Front which is Congress’ nemesis? Please appreciate the fact that, in Indian political scenario, BJP is the ideological opposite of Congress. And with burgeoning middle class support, its rise was just a question of time. But Third front parties are on the same side of ideological divide with Congress. Which means they are largely catering to the same market. Yet over the years, steadily they have grown at the cost of the Congress. With the rise of Mulayam, Mayawati and Lalu, Congress lost its vote bank of Muslims, Yadavs, and Dalits (MYD) in Hindi mainland and lost the game. Hence the fear.

Now if you look at the Congress attitude towards alliance building, from this viewpoint you will understand the reluctance. It wants to be to MYD voters what BJP was to upper caste Hindus when it was in opposition. Instead, this vote is split among itself and one, or in some states two regional players. In many states some of these voters are even voting BJP. So to protect and win back some of its lost vote, what can Congress do? It thinks Modi and the Hindutvawadis (also known as Bhakts) are the lot which have redefined the strategy of catering to Hindu RW votes. There was a time when Congress with its soft Hindu play was known as “Brahmano ki Party” (Party of Brahmins) in Hindi belt and used to get chunk of upper caste votes. Modi and Bhakts relentlessly raising the bar, had made it almost impossible for Congress to match BJP, when it comes to playing to Hindu sentiments. For the fear that it may further alienate its MYD vote bank.

For best part of first 50 years, since independence, Hindu middle class used to largely vote for Congress, which made it such a formidable force. But BJP and erstwhile Jan Sangh, worked with RSS and persisted with ‘Hindu Party’ image for decades together. And when it felt it had enough wind in its sail it launched Ramjanmabhumi movement. Coupling strident Hindutva with aggressive nationalism has helped BJP take away that Hindu vote from Congress. On other hand though Congress used to soft peddle Hindu issues and was seen as cynically opportunistic, leading to flight of conservative Hindus on one hand and MYD votes on other.

Realistically speaking, with BJP refusing to take the foot off the Hindutva peddle, Congress has no hopes of winning conservative Hindu votes back for a long time. But it fancies itself winning the MYD votes back as there is no competition at national level. Hence to please this typical anti-Hindutvawadi voters, it attacks Modi, aggressive nationalism, Indian Army and anything which will support Hindu revival.

So when Mani Shankar Aiyar derides Chaiwala, he wants Congress’ ‘That’ vote bank to see their commitment to the cause. The cause of keeping Hindu revival in check. Ditto when Shashi Throor says BJP is turning our country into Hindu Pakistan. Or CP Joshi blabbers that only Brahmins are entitled to discuss dos and don’ts in Hinduism. Or when Rahul Gandhi asks proof of Balakot strike. Or when Pawan Khera equates MODI to, Masood, Obama, Dawood and ISI.

Most of the people think (or posit) that Congress is being foolish and these utterances are blunders. This is not true. These are strategic abuses meant to appeal a specific cohort of voters. The dynasty knows two critical things. First just like 2014, Modi has taken a massive lead, again. Second forming alliance with Third Front parties is benefitting them more than Congress. Hence it is only going into tie-ups where it was completely vanquished in 2014 (Bihar and Telengana). Which means compared to last time, the only way is up.

The dynasty is just preserving itself for 2024. It’s hoping that by that time, the MVD vote may out of fatigue or just because of lack of national alternative, perform a ‘Gharwapsi’.

To reiterate the big point at the end, Congress is not winning 2019 elections. Rahul Gandhi and his handlers know this. It is important that, the voters who were going to vote for Congress in hope of seeing Modi’s back should also know it.