A Conference of the Crooked, Peddling Mischief, Provocation, and Lies 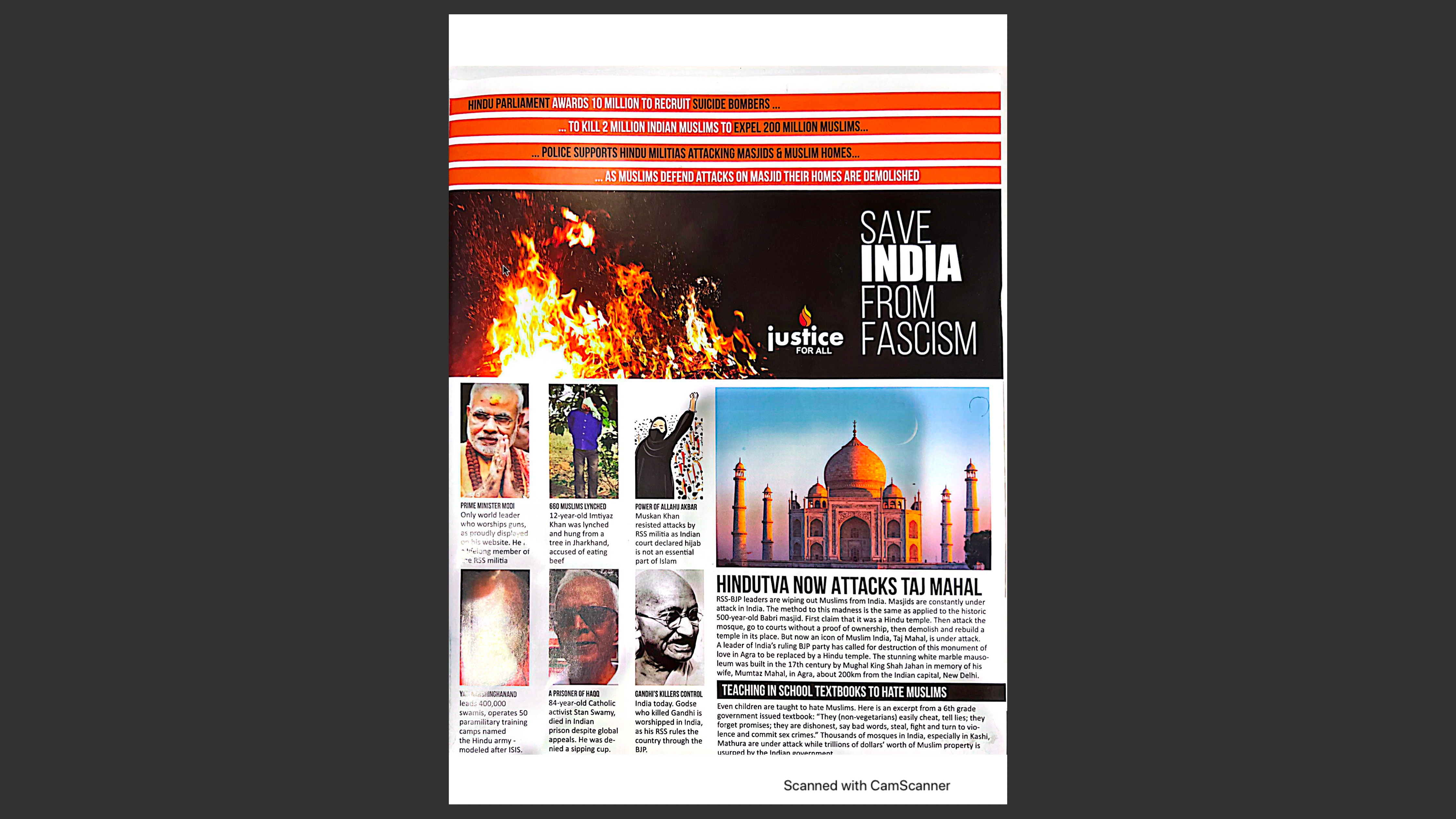 We were sent a “booklet,” an anti-Hindu screed, full of gory pictures, little data, or manufactured data so wild that there is no corroborative evidence that the author could have presented. The booklet is titled, “Save India from Fascism” – with the sub-heading “Justice for All”. The “booklet” was used in a presentation by a Muslim conference attendee. We believe it must have been Dr. Md Jahid Hossain Bhuiyan, whose presentation was titled, “The Right to Freedom of Religion in India and the Impact of Hindutva on Religious Minorities in the COVID-19 Era,” or by Mr. Adem Carroll who presented a paper titled “Hindutva in the USA”.

Dr. Bhuiyan is a “Humboldt Postdoctoral Fellow” at the Max Planck Institute for Comparative Public Law and International Law in Heidelberg, Germany. See the conference schedule here. Adem Carroll of “Justice for All” is conveniently hidden on the “Justice for All” website where we cannot even find out who leads this organization. When we try to do so by clicking on their “About Us” link we are taken it to a password protected page! But on their main page we can get a good look at who drives this site, and for whom they reserve justice! It is an Islamist organization masquerading as a human rights organization. Their blaring headlines on the page is a straight copy and paste from Dr Bhuiyan’s or Mr. Carroll’s presentation or vice versa, if indeed that was who that offered the screed at the ICERM conference. The main page even includes the photo of Rashad Hussain who was appointed, gratuitously, by President Biden as the “US Ambassador for Religious Freedom”. That Muslim majority countries deny equal rights to all other faith groups in their countries was completely ignored by Mr. Biden and his minions gratuitously trying to appease their vote banks! What a travesty! The Justice for All website asks us to “Stand with Indian Muslims, Uyghurs, Rohingyas, Kashmiris, Palestinians”. So, justice is reserved only for Muslims? What about the avowed goal of making the world Muslim, and Muslim leaders’ countenance if not direct support for the violence and mayhem that the so-called “individual, misguided” Muslims wreak on the world every year?

In search of Adem Carroll on Google, we come upon this bio/sketch of Mr. Carroll: “… is a New York Irish Muslim working to protect human rights. Adem completed Peace Corps service in Morocco and received a masters’ degree in Near Eastern Studies at NYU. After several years of AmericCorps program management, Adem joined Islamic Circle of North America (ICNA Relief) after the 9/11 terror attacks. There he directly provided emergency legal and financial help to over 825 Muslim detainees and their families”. Ah, now we know where Mr. Adem Carroll’s sympathies lie, and where and how he disseminates lies. We are also told that Mr. Carroll “is founder and former Executive Director of Muslim Consultative Network, which works to promote inclusion, dialogue and community strengthening in New York City”. Interesting, shall we say that Adem’s presentation at this ICERM conference is titled, “Hindutva in the USA: Understanding the Promotion of Ethnic and Religious Conflict”? That this anti-Hindu bigot masquerades as a human rights activist goes to show how corrupted and bastardized the term “human rights” has become. That such extremist, violent, monopolists and supremacists can claim to be human rights activists also goes to show how much of the public space and international institutions have been hijacked, infiltrated, and commandeered by these people. They may not wear suicide vests, but they encourage violence with their lies, mischief, and provocation.

Dr. Bhuiyan, originally from Bangladesh, has studied law in Australia and Belgium we are told, but what he seems to sell is scare-mongering, targeting “Hindutva” while turning a blind eye on his country and countrymen butchering, raping, maiming Hindu men, women, and children, and robbing them of their homes, temples, and their livelihoods. See here, if you have a strong stomach and are willing to read the truth!

That the ICERM Conference this year allowed either Dr. Bhuiyan or Mr. Carroll to provoke and to lie – because there were only two presentations focusing on Hindus and India in the conference – we may wonder what exactly the real agenda of ICERM is and who guides that institution for what ends. No prize for correct guesses!

This New York City conference was held between September 27-29 – two weeks ago. Interestingly, the other presentation with an India/Hindu theme at the conference was titled, “Hindutva in the USA: Understanding the Promotion of Ethnic and Religious Conflict,” and the speaker was Adem Carroll of “Justice for All USA”.

Here are the improbable, provocative, and deceitful claims made in the four-page booklet:

The pamphlet is meant to provoke, mislead, lie, and incite. So, we give you more of the messages and the images in that pamphlet so that you realize how brazen this attempt to incite hatred against Hindus and the Indian government was at this so called conference of :

There is more such provocative nonsense in the four-page booklet that was used to present at the New York City conference organized by the “International Center for Ethno-Religious Mediation,” started by a Nigerian Catholic priest, Basil Ugorji. That ICERM allows for lies to be peddled at their conferences makes for an interesting case study itself. They claim to “bridge theory, research, practice and policy” and that they “build partnerships for inclusion, justice, sustainable development, and peace”. It does seem to be a lucrative venture as the organization claims affiliation with the United Nations, and also that they are involved in developing “…alternative methods of preventing and resolving ethnic, racial, and religious conflicts in countries around the world. We strive to help the United Nations and Member States to achieve Sustainable Development Goal 16: peace, inclusion, sustainable development, and justice”. Wonder what they have got to show for all of their claims about how they do business. See here.

Interestingly, not one of the papers presented at the conference seems to focus on China! Nor on Saudi Arabia, nor Iran, nor Turkey. And more interestingly, not one office bearer, executive leader of the organization is listed on the website, and therefore we know nothing of their faith affiliations, incomes, inclinations, political ideologies, etc. And there were two presentations about Islam, pushing the “peace” narrative: “Mosques as an Actor in the Prevention of Radicalization and Rehabilitation of Extremism” (is it not the opposite case the world over?), and “A Study of Prophet Muhammad’s Conduct on Conflict Resolutions”: what would that be — jihad lite, jihad moderate, or jihad extreme?

India and Hindus are sought to be encircled. Hindus are sought to be squeezed out of public spaces, and we are being demonized in the West, in international forums, and across the rest of the world. We know who all the actors are, and our only hope, again, is that they will form circular firing squads… or else there is very little chance of escaping from these stratagems of deceit and hate.