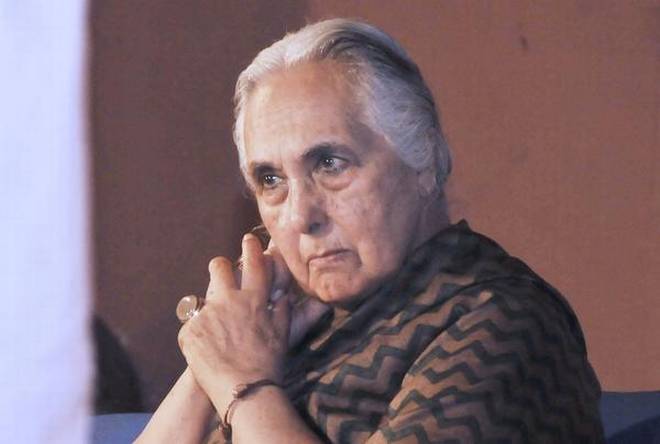 The recent outrage over JNU administration’s communication to noted historian Romila Thapar to submit her updated CV to help the administration review the possibility of her continuation as Professor Emeritus (an honorary position) reveals a disturbing trend in the way dissent is articulated and intellectualism is asserted. In pure administrative terms, the communication was carried out as per the university norms, and the letter was a customary exercise sent to a dozen such professors who had attained the age of seventy-five. The objective was to know their willingness to continue in the same position. Given that such professors retain their office space in the university to conduct research even after superannuation, periodic check is required so as to ascertain if the said professor is adding any value to the university and also if he/she wishes to continue. This is not just fair and logical, but also very routine.

But as always, outrage, more so when expressed by intellectuals scorned, is the end of reason. The teachers’ association of the university (JNUTA) demanded an apology from the university administration and saw in the letter an effort to silence a known critic of the present establishment. In its official release JNUTA called it a “deliberate attempt to try and dishonour those who have been critical of the current administration”. It also argued that by doing so, the university administration is bringing dishonour to the teaching and learning traditions of JNU. Thapar herself added to the confusion by saying that the move was to “dishonour someone who has been critical of the changes that have been introduced by the present administration”. There was no effort to know how furnishing credentials is such a dishonour.

After the news broke, many news channels went berserk for the next few hours and reported in a way as if the sky has fallen and India is shrouded in darkness. It did not matter to them that Thapar is only one of a dozen such professors who have been asked to send their CV (and not being summoned to a police station) and that their exaggerated claim of her being the greatest historian ever neither revealed their intelligence nor did any service to her claim to such fame. In perfect synchronization with JNUTA, The Telegraph reported “This is a purely politically motivated action. Professor Thapar is a strong critic of policies of privatisation of education, erosion of autonomy of institutions and crushing of dissent by institutions, including JNU.” It was possibly a humiliation to other such professors who had received such communication, had complied, or had chosen not to, or perhaps were not as famous as Thapar. It did not matter to JNUTA or the media houses that scientists like A. Rajaraman and A. Datta were served similar letters, were pioneers in their fields and had also been recipients of Bhatnagar award. But perhaps they did not have that kind of fan following among media houses and politicians the way Thapar had. The Outrage Inc. was only interested in Thapar, because her supposed victimization by the University administration had tremendous exchange value to galvanize the intellectuals.

Then it was time for politicians that helped understand the uproar and established that Thapar was not just a historian, but a symbol of a Syndicate that survives on entitlement and political patronage, the hallmark of left liberal school of thought. In such a template asking any question is seen as insult. I am not raising doubts about her academic credentials; my problem is the disproportionate manner in which the whole media coverage was concentrated on Thapar. Sashi Tharoor in his intellectual intoxication said “JNU asking Romila Thapar to submit a cv to JNU to continue her Professor Emerita status is worse than an insult, it is a crime against the values & principles of education & respect for intellectual merit. Can JNU sink any lower?”. Eminent lawyer and politician Prashant Bhusan said “One of the world’s best & most acclaimed historians Romila Thapar is asked by JNU authorities to show her CV! Only because she has been critical of govt. This is what happens when our top Univ. is handed over to Bhakts. This govt has declared war on thought!”.

The objective here is not to unravel some truth or find a sequence of events as they happened. It is to understand the way the letter to Thapar is received and interpreted and what they reveal about the intellectual culture of the left-leaning academics, particularly of JNU brand. Whether Thapar herself engineered this revolt or manipulated her bhakts in JNUTA to go ballistic the way they did is anybody’s guess. But prima facie it appears to be the standard protestations of the followers/chamchas of a politician, relatively less endowed with scholarship and trying to establish themselves as true inheritors of Thapar’s legacy. They were not interested in protecting her, because there was nothing to protect. All she had to do is express her willingness and resend her CV (usually continuously updated and saved on desktop) or speak with the administration in case of difficulty. If she was too old to do that, which is quite probable given her advanced age, that means she is too old to carry forward her research in JNU and so need not be retained as professor emeritus. Reading this as a strategic move to silence government’s critics raises doubts about the intelligence of the readers of such news. This is so much similar to the way fan clubs of Tamil Nadu go out of the way to promote a star’s power and influence and hope to get benefits in terms of being promoted as the star’s propaganda secretary or President of all such fan clubs or just travelling with the star and bask in reflected glory.

What is troubling, if not surprising, is the deification of an intellectual and her elevation as the demigod of modern intellectual pursuit. This no doubt is in tension with the vocation of an intellectual to keep pushing the boundaries of reason. If Bharat Mata as the reference point for the political Right is an exercise in limiting human intellect (as intellectuals believe), deification of a human is even a worse example of the same, something that even blind followers of Modi will hesitate to do. So understanding JNUTA official response demands a new orientation of the term Bhakt, so far used ad nauseam for Modi supporters, and explore if it has the carrying capacity to reveal the character of JNUTA members. The office bearers of the Association did the opposite of what they preached about transparency and openness to ideas. They ended up reinforcing stagnation of ideas and acted as protectors dogma. And media houses were not advancing the cause of freedom and reason by advancing JNUTA agenda and exaggerating an ordinary routine letter (which all of us receive every other day) as intimations of intellectual doomsday.

We may forgive, or even rationalize as tricks of trade, politicians like Tharoor and Bhusan given that it is bread and butter for them. More so for Tharoor since he has attracted sufficient opposition from within Kerala Congress and he could not have missed this opportunity to establish his credential as a Modi critic. We may argue that Thapar was like a patriarch, one who is authoritative and unpredictable, and always demands the adulation of his family members and threatens to disown them in case a family member does not exhibit sufficient respect. She may have created that sense of anxiety among her followers in JNUTA. In such situations, each child must prove that he/she is better than his/her siblings/relatives in being more protective, more devotional and more loud. Nothing explains why JNU and its faculty are sacrosanct, or why its senior professors cannot be asked to furnish their credentials and why the whole idea of JNU as a quintessential space of dissent cannot be subjected to scrutiny. If JNU as an idea is immune to criticism and its select professors beyond any scope of debate either due to their inflated ego or due to the servitude of their followers, we should perhaps think of converting JNU as a Hindu goddess. Maybe Bharat Mata can be replaced by JNU Mata.

India’s age-old tradition and devotion to gurus make people negotiate with any authority figure in ways that can baffle many. Thus we have temples in India for film stars and cricketers, but also for those who challenge any orthodox and dogmatic view of society. Caught between the gratitude for the guru and the promise of reason that questions the former, people often end up creating hybrid spaces of negotiation. So if Marx replaces all feudal ways production and distribution, the Marxists make him the next feudal lord or a god and convert his tract into the new Book. Similarly followers of atheist M. Karunanidhi (ironically meaning God) can build a temple for him so that he can be the new God of Dravidian ideology. It is another story that such followers may not even have basic understanding of that ideology or they may be doing so for advancing their career. Building a temple is the ultimate tribute that one can think of. Thapar’s followers in JNUTA may or may not understand and appreciate what she had to say about ancient India, but they knew that it is an imperative, even dharmic to defend an iconic Marxist academic. So why not a temple for Thapar? Is JNUTA listening?