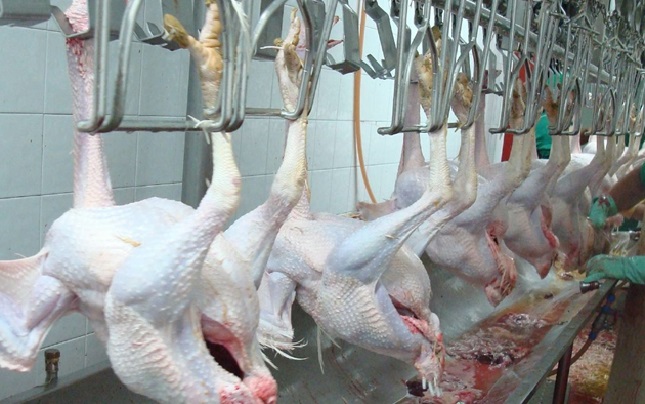 The first thing that strikes about the place is how cold and quiet it is. For a place with 25 workers, there is hardly any banter, or the usual complaints about pay.

And then you notice the long row. Of turkeys. Dead turkeys. No, make that slaughtered turkeys, with their throats slit, hung upside down, feathers plucked, slowly dripping blood on to a shiny stainless steel row.

These are carcasses that have been through slaughter and are awaiting evisceration. Thanks to a new regulation passed in 2013, they will now move faster through slaughter lines and arrive at supermarkets just in time for Thanksgiving Day, which this year falls on 26 November.

This is the scene across slaughterhouses in America. According to the U.S. Department of Agriculture, more than 45 million turkeys are cooked and eaten in the U.S. at Thanksgiving—that’s one sixth of all turkeys sold in the U.S. each year. That’s roughly one turkey for every seven American citizens, killed and consumed in a giant celebration of the arrival of Europeans to the continent.

This particular celebration seems to follow from an older pagan European tradition of celebrating the harvest. However, American history traditionally associates this observance with the arrival of Pilgrims and Puritans in the New England region, notably Plymouth in Massachusetts State in the North East of the United States.

It is hard to correctly trace when the first Thanksgiving Day was celebrated in the US. Various traditions have it as 1621, 1623 and 1631. In any event, the celebration was established by 1863, when Abraham Lincoln standardized the date across all states.

The first celebrations were for the successful harvests in the New World, helped along, no doubt, by the natives who were cultivating squash and maize for millennia in the same region. Those Native Americans got no thanks, though. By the 18th Century, they had been wiped out from the Eastern region and by the end of the 19th, the remaining few thousands survivors of Columbus’ Discovery had been herded like cattle into reservations, where their descendants live to this day. They have among the lowest rates of human development anywhere in the World.

The modern version of Thanksgiving consists of a holiday on the fourth Thursday of every November. This traditionally marks the beginning of the holiday season for the six weeks until the first week of January, when shopping malls see their highest footfalls ever and the liquor industry sees 20 percent of its sales.

In recent decades, increasing leisure time and lack of social cohesion has meant that the celebrations extend beyond the Thursday alone.

Students celebrate the Wednesday before as “Blackout Wednesday”, seen as an occasion for drunken revelry before they head to their parents’ homes for the holiday.

Thanksgiving Day mainly features gift-giving and a large Thanksgiving dinner, the center-piece of which is the consumption of the turkey carcass. The whole carcass, which has been carefully removed of entrails and blood, is stuffed with condiments, bread and then roasted in an oven.

In a patriarchal tradition, the man of the house cuts pieces of the dead bird and serves them to members of the family. At the end of the meal, the diner that gets a specific “wishbone” between the neck and breast of the turkey, breaks it, making a wish mentally.

After this Thursday, Americans mark the Friday as ‘Black Friday’, which is an occasion for people to spend money on buying electronic items and clothes. Shops mark this by opening early, by 6 AM.

We spoke to Randy, who goes to a State college in the Mid-West: “I am not sure I want to go home for Thanksgiving. My mother has divorced my stepfather and I am not sure which of her partners she wishes to celebrate her holiday with. It doesn’t matter, since I don’t like any of them.” He is not sure of his biological father’s identity and the last partner his mother had for more than five years is not inviting him.

Amy from California says she’s “all excited and stuff” about the holiday. Her father will host her and her partner, Jenny, at his home. “Last year, I never made it out of the bed for Thanksgiving. We had a sorority party for Blackout Wednesday and guess what? I really did black out!” This year, her father has promised to take her out shopping on Black Friday.

Back in the slaughterhouse, Jim and Juan, who are manning the evisceration line, are looking forward to Wednesday, when the slaughter will end and they can take a few days’ rest. They have been working extra hours through the last three weeks of November. For every extra hour, they are paid $20, as opposed to the regular $14.

Juan, who insists that we call him Johnny, is a native of Honduras and is reluctant to discuss his immigration status. He has not heard of Thanksgiving before he came to the United States. He says no one in his family likes turkey anyway.

Jim is a member of the African-American minority. Most of them are descendants of African people who were kidnapped and brought to America as slaves. Progress in their lives has been slow, given the crushing burden of oppression and poverty. As recently as 1850s, it was legal to own slaves in various parts of the United States. It was not until the 1960s that African-Americans were allowed to use the same buses, public toilets and classrooms as white Americans.

“The supervisor may let us split one of the turkeys between the two of us. I think the kids would like that.”