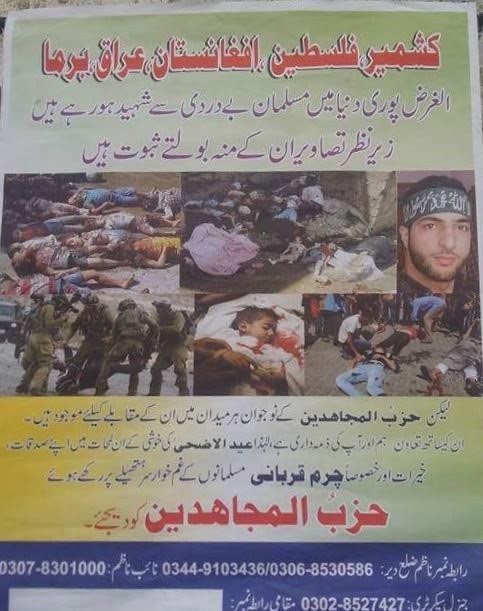 The in-house Urdu magazine of the extremist outfit, Jaish-e-Muhammad-al-Qalam has published an article urging the South Asian Muslims to wage a violent jihad in Myanmar in retaliation of the reported persecutions of Rohingya Muslims in Myanmar.

In its latest edition, the weekly magazine, which claims to be the torch-bearer of Islamic journalism (Islami sahafat ka alambardar) carries an article penned by Maulana Masood Azhar, chief of the terror outfit, Jaish-e-Muhammad.

At the very outset, Azhar threatens the ‘oppressive’ Myanmar government to prepare for “the thudding sound of the footsteps of its conquerors”. He avers that “the country will be soon deprived of peace and tranquility”.

A cursory look at the key contents reveals the potential of radicalization well-embedded in this virulent piece. It reads: “The global Muslim community (ummah) is feeling the pain of the Muslim nation……” “It is because of the sacrifices of the Myanmar Muslims that the ummah is waking up and we are seeing this new awakening among the Muslims of the world…..” “All of us must do whatever we can for the Myanmar Muslims. Just say your prayers, and get up to help them. You don’t need to show off what you are doing: just do it, and never stop.” The full Urdu article is accessed online here.

Thus, it is the first time that any extremist jihadist ideologue in South Asia has given a call for jihad in Myanmar. Significantly, this jihadist war-cry has come in a weekly column in al-Qalam regularly written by Maulana Masood Azhar under his pen-name ‘Sa’adi’. In this article titled in Urdu as “Betab Burma” (Distressed Burma), the group’s house magazine appeals to the common Muslims of the subcontinent “to do something, and do it urgently”.

The extremist jihadist magazine—Al-Qalam—which is published in Urdu both in print and online is freely available to the gullible young Muslim confrontationists in the subcontinent. Jihadist literature like this has considerably helped in radicalizing a sizeable number of naive Urdu readers, particularly in Pakistan, Kashmir and even some parts of the Urdu-speaking states in India.

It is not difficult to see why this ‘clarion call’ for jihad by one of the most notorious South Asian extremist cult has been raised at a time when an increasing number of Muslim masses in India are joining the chorus of “Rise for Rohingyas”.

Given the growing anguish among the country’s Muslim citizens against the Myanmar’s crackdown on their co-religionists—Rohingyas— and deep religious sympathy for them, the jihadist war-cry of Jaish-e-Muhammad and the ilk will fuel the flame of Islamist radicalization in India.

With the first call for Jihad in Myanmar, the Jaish-e-Mohammad has sowed the seeds of this imminent religious strife. Several other extremist Islamist outfits in South Asia are rooting for the ‘Rohingya jihad’ in a bid to further their nefarious ends.

Now, similar calls for jihad are emerging from the global jihadist outfits like the Al Qaeda, which pose threats against the internal security of the region. According to the Pakistani newspaper’s report dated Sep 14, 2017, Al Qaeda militants have called for support for Myanmar’s Rohingya Muslims, warning that Myanmar would face “punishment” for its “crimes”. The militant group behind the September 11, 2001, attacks on the United States issued a statement urging Muslims around the world to support their fellow Muslims in Myanmar with aid, weapons and “military support”. “The savage treatment meted out to our Muslim brothers … shall not pass without punishment,” al Qaeda said in a statement, according to the SITE monitoring group. “The government of Myanmar shall be made to taste what our Muslim brothers have tasted.”

The mainstream Muslims in the subcontinent must refute the radical rhetoric being promulgated for the violent jihadism in the name of ‘Rohingya Muslims’ like in the Al-Qalam’s article or Al Qaeda’s proclamation.  Indian Muslim leaders’ compassion and moral support for the Rohingya refugees is not misplaced. But they should also feel impelled to distance the community from monsters of the jihadist radicalisation.

Whether some of the Rohingyas, if not the whole community, are linked with the radical jihadist outfit, Aqa Mul Mujahideen, and hence their illegal immigration in India poses security threats, is still being debated. But there has been no theological refutation, vociferously, of these jihadist underpinnings behind the Rohingya radicalisation. Also, there is substantial evidence that the Rohingya-linked extremists are predominantly influenced by the puritanical thoughts of either the Pakistani Wahhabis or the India-based global movement of Islamic preaching—Tablighi Jama’at.

An ideological probe into the Rohingya crisis unravels that Rohingya Muslims’ plight is being used as a tool in the hands of the extremist Islamist outfits now. They began to indoctrinate the gullible Muslims into the narrative of victimhood. Indian officials have also found evidence that these groups have attracted a few Rohingyas by promising to help them carry out retribution against Myanmar, Bangladesh and India.

Tellingly, India has the second highest Muslim population, by and large, living peacefully and even dominantly in some parts of the country. But surprisingly, radical Islamist outfits in India allege that the country has been turned into religio-fascism. Muslims’ lives in India, they say, have been put in jeopardy. And still, they demand that Rohingya Muslims be absorbed in India!!!

A Kerala-based Islamic outfit, the Popular Front of India (PFI) has slammed not only the government of Myanmar for persecuting and depriving the Rohingya Muslims of their rights and citizenship, but also the Indian government for planning to deport them from the country. Recently, many Islamic organisations like the Jamiat Ulema-e-Hind have planned to take out strong protests and marches in Delhi for the rights of Rohingyas, as widely reported in the local Urdu media outlets. But none of them seems to get worried with the extremist and fanatic elements making an ideological capital out of the issue.

Scores of Islam-based social media groups are purportedly sharing pictures of persecution against the Rohingya Muslims and thus creating grievous fears among the common Indian Muslims against their own country. An outpouring of compassion for their co-religionists is natural and cannot be rejected outright. But this poses a grave internal security threat, given the similar display of sympathy and strongly-worded support and confrontational statements from the Pakistani jihadist outfits sparking regional fears.

Particularly in Kashmir, Hizbul Mujahideen has been fanning the flame of radicalism telling the provocative stories of the Muslim victimhood in Myanmar. The extremist outfit’s sympathizers widely shared an Urdu poster on social media groups, on the occasion of the Eid-ul-Adha, urging Muslims of the valley to donate skins of the slaughtered animals to the Hizbul Mujahideen,  which claimed to step up to rescue the Rohingya refugees. The Hizbul Mujahideen’s poster reads in Urdu:

“Kashmir, Palestine, Afghanistan, Iraq and now Burma. In fact, Muslims all across the world are getting mercilessly massacred and attaining martyrdom (shahadat), as evidenced in the given pictures. But the youths of Hizbul Mujahideen are well-prepared to tackle the onslaughts on Muslims everywhere. It’s your responsibility to make contributions in this cause. Hence, you must offer your Islamic donations and charity (Sadaqat and Khairat), particularly the sacrificed animal’s skins to the Hizbul Mujahideen, which resolves to rescue the distressed Muslims.”

This poster carries gruesome pictures showing Muslim children and women being ruthlessly killed in Burma, Palestinie, Afghanistan and Iraq. It has also provided the contact numbers of three responsible persons, as detailed in an article on a liberal and progressive Urdu website, Naya Zamana.

No wonder then, Zakir Musa, the Kashmiri militant who was earlier the Hizb-ul-Mujahideen commander and now heads a newly created Jihadist outfit in Kashmir,  Ansar Ghazwat-ul-Hind, in his recent video warned that “there will be wanton killing and bloodshed if 8,000 Rohingyas in Jammu are deported”.

While the Pakistan-based Islamist radicalisation is unceasingly active, the Rohingya plight remains a crucial security concern for India. The Pakistani terror outfit, Jama’at-ud-Dawa also known as Lashkar-e-Taiba (LeT) has reportedly organized the refugee camps of Rohingya Muslims in Indonesia. Under the leadership of the global terrorist Hafiz Saeed, Jama’at-ud-Dawa posed as a humanitarian organization and offered food, clothes and shelters to the Rohingya Muslim immigrants in various countries.

The common preceptors in India—including the human rights activists, journalists as well as the Islamic clergy—barely engage with the Rohingya crisis from a deeper ideological point of view. They fail to fathom how the Rohingya issue is being misused to further the ulterior motives of the radical Islamist outfits, particularly Pakistan’s home-grown jihadist cults. Given this, it is imperative to demystify the Rohingiya issue in India from this theoretical perspective.