Alauddin Khilji and Padmavati: just who is afraid of History? 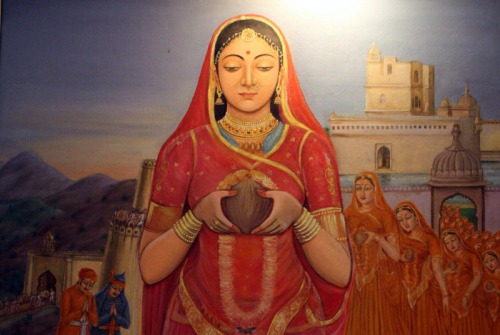 Several “liberal” columnists have expressed anguish at the recent protests against the director of the upcoming controversial film ‘Padmavati’, which is based on the historical saga involving the characters of Alauddin Khilji, the 13th century ruler of the Delhi Sultanate and the contemporary Rajput princess, Padmini. Their defense of the film-maker and demonization of the protestors involves the following ‘liberal’ arguments:

(1) Rani Padmini was not a real historical figure and so there is no historical distortion, just re-imagination of an old legend.

(2) Cinema is a form of creative expression and artistic license permits historical reinterpretation, even if devoid of historical merit.

(3) What about freedom of expression? If you don’t like the movie, do not watch it, or just make your own movie on the subject.

The analysis of each of these positions reveals the problematic nature of contemporary Indian “secular-liberal” discourse, its bias, duplicity, mendacity and lack of sensitivity, while exploring Hindu culture, history and traditions.

First, the historicity of Padmini is far more complex than the rude and vulgar “secular” fictionalization of a legendary figure whose sacred memory is alive in the hearts and minds of millions of Hindus. In the land of Chittor, century old temples and shrines dedicated to the memory of the legendary princess continue to be active sites of devotion. Therefore, there is clearly an element of traditional religiosity in the Padmavati saga, which has over time acquired a graceful sanctity.  Any attempt, to apparently violate the sacred memory of Padmavati built through centuries of cultural memory and oral tradition through a reckless act of commercial Bollywood cinema could be interpreted as an act of perversion, at least by those who believe and identify with her.

Moreover, the insistence on Padmavati’s historicity as some essential prerequisite for upholding the moral validity of protest is also suggestive of a deeply semitic rather than Indic way of thinking where indigenous figures on the margins of history like Bhishma, Draupadi, Vikramaditya or Raja Bhoja have animated popular culture and thought for generations. The same “secularists” who demand historical evidence enthusiastically while considering respect for tradition fulminate against the idea of historical evidence documenting large scale pogroms, genocides, forced conversions and temple destructions during the medieval age by Islamist invaders.

Nevertheless, purely from a historical perspective, it is true that there is no contemporary account, which corroborates the legend of Padmini, the beautiful Rajput princess who along with thousands of other women defied the will of the Muslim ruler, Alauddin Khilji through the act of Jauhar (mass immolation) and frustrated his designs of possessing her. This significant omission was observed by the preeminent historian of medieval India, Prof. K S Lal in his monumental book ‘History of the Khiljis’. Unfortunately, Lal in his later years experienced a disgraceful academic apartheid from leftist dominated academia since he had the audacity to produce brilliantly researched texts on medieval India like ‘The Legacy of Muslim Rule in India’ and ‘Muslim slave system in Medieval India’, which did not shy from documenting religious excesses and violence.

But returning to Padmini, such an absence of evidence is not evidence of absence. For instance, there is no reliable contemporary Greek record to affirm the existence of the Chandragupta of Mauryan antiquity. There is no contemporary Hindu source, which documents the invasions of Mahmud of Ghazni at Somnath. Probably, the availability of a powerful concept of cyclical time permitted Hindus to cast away unrecorded, at least in writing most painful historical events even as they persisted in popular memory and acquired embellishments through the vicissitudes of time.  In his well-researched, but unfortunately poorly documented work ‘Rani Padmini: the heroine of Chittor’, B K Karkra makes the assertion that references to Padmini in Malik Mohammed Jayasi’s ‘Padmavat’ was predated by her mention in Chhitai Charita authored by Narain Das of Sarangpur in 1526. Karkra makes the compelling argument that since the work mentions her alongside incontrovertible historical figures like Deval Rani (a Gujarati princess who was abducted and forcibly married to the Sultan’s son), it is possible that Padmini’s legend had become well entrenched in the popular consciousness during Das and Jayasi’s age. Furthermore, the cryptic suggestion by Amir Khusrau, the famed poet in Khilji’s court, through a reference to the Biblical story of Solomon and queen of Sheba during Khilji’s march to Chittor in 1303 should not be overlooked. Other instances of jauhar have been correlated with Khilji’s military expeditions like the one performed by the queen Ranga Devi of Ranthambore. While these indirect evidences lend credence to the idea of Padmini as a real historical figure, Karkra ultimately suggests that Padmini’s memory was deliberately erased from the official Rajput literary tradition in order to promote a patriarchal counter narrative eulogizing her husband Ratan Singh whose estimation of valour in popular consciousness had plummeted in permitting the Sultan, Khilji, a glimpse of the royal queen. Similarly, contemporary Muslim chronicles were silent on the episode since the act of Jauhar and Padmini’s unearthly defiance resulted in Alauddin’s ambitions to be reduced to a spectacular failure.

The demand for historical authenticity should also necessarily imply that the character of Alauddin Khilji be subject to an accurate historical estimation. The Sultan ascended the throne by murdering the emperor Jalauddin Khilji. His expeditions against Hindu kingdoms resulted in at least three instances of Jauhar or mass immolation by thousands of Hindu women in order to protect their honour both in life and death. At Chittor, Amir Khusrau found the emperor to ‘have cut the Hindus like dry grass’ by ordering a general massacre of the population, a feat, which was replicated by the great Mughal emperor Akbar almost two centuries later. During his tyrannical rule, the historian R C Majumdar observed that Khilji’s ruinous economic policies caused ‘the country at large to be bled’. According to the contemporary Muslim chronicles, the ‘Sultan Alauddin demanded from his ulema, rules and regulations, so that the Hindu should be ground down, and property and possessions, which are the cause of disaffection and rebellion should not remain in the house.’ His actions successfully “grinded the Hindus depriving them of their wealth so that they could never think of revolt…There was no sign of any gold in the Hindu households” Such means of systematic discrimination were canalized through unjust taxation like jizya and high revenue burden upon Hindus. It is difficult to discover any redeeming feature of Alauddin’s reign, including his much-vaunted defense of his kingdom against the Mongols, since there is no reason to assume that the latter would have been more barbaric or less accommodating to Hindu beliefs and practices.

Left Liberal columnists can mock the Hindu right in their inability to use cinema as a vehicle for advancing ideology, unlike them. The asymmetry in resources apart, they are well aware that in contemporary India, no potential Indian films critical of Islamic or Christian (historical) personalities, culture and religion can see the light of the day due to the institutionalized sense of exceptionalism accorded to ‘minority sensibilities’. When even a film critical of Naxal ideology like ‘Buddha in the traffic jam’ met with such collective hostility and total opposition by mainstream leftist film reviewers, it leaves little scope for tolerant reception of actual “Hindutva” genres!  Will the Indian censors, the courts, the government permit the screening of a film which depicts Alauddin or Aurangzeb’s brutality as recorded in history for defending the freedom of expression? Will the “liberal” intellectuals support the creation of such cinematic genres? Will the consortium of cinema hall owners promote and screen such cinema, if public demand and profits are assured? Will such films be insulated against draconian sections 295-C and 153-A of the IPC in the face of potential protest and disruption of law and order by communal organizations? A long deafening silence might await us.

Islamic Sources and the Myth of Kamala Devi & Deval Devi