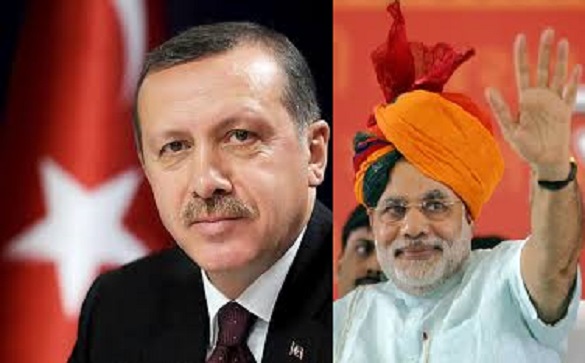 In the 30 November edition of Times Of India, novelist  Amitav Ghosh penned a piece in which he draws a significant comparison between the Prime Minister of India Narendra Modi and Turkish President Recep Tayyip Erdoğan.  In doing so he confounds the features of both Turkish and Indian secularism. We can begin by examining this extract from Mr. Ghosh:

…..the two countries do have at least one very important commonality: both are multi-ethnic and multi-religious, with very marked differences between regions. It is for this reason perhaps that the transition to nationhood was accompanied by similar traumas in both India and Turkey: indeed it could be said that it is in their dreams and nightmares, their anxieties and aspirations, that their commonalities find their most eloquent expression.

Both republics were born amidst civil conflict, war and massive exchanges of population. In no small part was it due to these experiences that secularism came to attain an unusual salience in the two countries: it was considered indispensable for the maintenance of peace and equity within diverse populations. But secularism was thought to be indispensable also to the aspirations for material advancement that lay at the heart of the Kemalist and Nehruvian projects. For the elites of both countries there was little difference between ‘secularism’ and ‘secularization’: the ultimate aspiration was for a general progression towards what Nehru liked to call the ‘scientific temper’. This was thought to be essential to the attainment of modern ways of living, as exemplified by the West. But since religion plays an important role in the lives of the vast majority of Indians and Turks, secularism was always an embattled aspiration, in both countries. Yet, through the latter decades of the 20th century, even as the banners of secular-nationalism were beginning to look increasingly tattered, their bearers somehow managed to retain their hold on power in both Turkey and India……..

It seems Mr.Ghosh chose to ignore the important features that differentiate Turkish Secularism from its Indian counterpart. It is already a fact of history that Mustapha Kemal Pasha or Kemal Ataturk took charge of Turkey following the conclusion of World War I. As Turkey’s then traditional rulers, the Ottoman Caliphs accepted their defeat, and the victorious Western powers made plans to partition Turkey’s territory, Ataturk assembled a rebel army and freed the country from the occupying British, French, Greek and Italian troops.

Following this successful venture, Ataturk took the bold decision to abolish the Ottoman Caliphate, the concept through which Turkey had claimed leadership of the Islamic world, and ushered in a secular republic.

The budding Secular Republic of Turkey defined the religious Muslim scholars and clergy—the Ulema—as a non-civilized group of people who functioned in the realm of superstition. The followers and disciples of Ataturk—the Kemalists—openly declared that “Islam viewed all forms of superstition…..The state will be ruled by positivism not superstition.”

[pullquote]The Kemalist administration adopted a modified version of Swiss Civil Code akin to a Uniform Civil Code while shutting down all the Ottoman era Sharia courts. The Civil Code was the same for all communities in Turkey—both Muslim and non-Muslim.[/pullquote]

In the beginning 1923, a series of laws gradually limited the public display of selected items of traditional Islamic clothing. Ataturk first made the hat compulsory for civil servants. He followed this up with making a uniform dress code for students and state employees.

The Hat Law of 1925 introduced the use of Western style hats instead of the fez—the law made the wearing of fez a minor crime. In 1934, the Turkish legislature passed a law relating to the wearing of ‘Prohibited Garments’ which banned religion-based clothing such as the veil and turban, making western-style attire compulsory.

By 1926 the Kemalist administration adopted a modified version of Swiss Civil Code akin to a Uniform Civil Code while shutting down all the Ottoman era Sharia courts. The Civil Code was the same for all communities in Turkey—both Muslim and non-Muslim. Interestingly, the Kemalists declared Turkey as the ‘Nation Of Turks’ and called upon the Kurds, Armenians, Levantines and Greeks to shed their individual identities and integrate themselves with the larger Turkish nation.

The Kemalist administration also aimed to change the appearance of Islam itself : the Presidency of Religious Affairs (Turkish: Diyanet İşleri Başkanlığı) founded by the Grand National Assembly of Turkey in 1924 took a decision of implementing a Turkish azan in place of  the standard Arabic call to prayer.

On 18 July 1932, the Presidency of Religious Affairs announced the decision that all the mosques across Turkey should call for prayer in Turkish, and the practice was continued for a period of eighteen years.  For long, the wearing of headscarves and skullcaps was not accepted by the Turkish state with the judiciary often handing out fines as punishment.

And now we can turn to Indian secularism, which most accurately can be defined as Nehruvianism. And the first thing we witness here is the direct opposite of Kemalism. We can begin at 1955 when Jawaharlal Nehru allowed separate personal laws for Muslims, for which Acharya Kripalani charged him with communalism on the floor of Parliament. Not only that, Nehruvian secularism since its inception fostered unfairness against the Indian traditions set by a 5000-year old civilization that did not give a monopoly to any single god, and gave every individual a right to choose his/her path to god, and even the choice of one’s own personal God.

And if Mr. Ghosh identifies Kemalism as “salient secularism,” then what explains his hostility towards the Sangh Parivar whose demands on Uniform Civil Code and Hindu Rashtra are much more benign and rooted in India’s civilizational values than the Kemalist one? Consider the following statements:

2. A reformist’s attitude is all right. But a mechanical leveller’s attitude would not be correct. Let the Muslims evolve their own laws. I will be happy when they arrive at the conclusion that polygamy is not good for them, but I would not like to force my views on them. (MS Golwalkar as quoted in Anderson and Damle, Brotherhood in Saffron, p.83)

As far as being strikingly similar, Amitav Ghosh must be aware that unlike Erdogan, PM Modi has not called for changing the essentials of the Indian state.

Also Erdogan had to perform his political role in a nation which was coup-prone for a long time, whereas Indian democracy with the exception of the dark days of the Emergency, never faced the shadow of despotism. But it seems Mr. Ghosh chose to let that pass by since he could create a parallel between political Islam and cultural Indian nationalism.