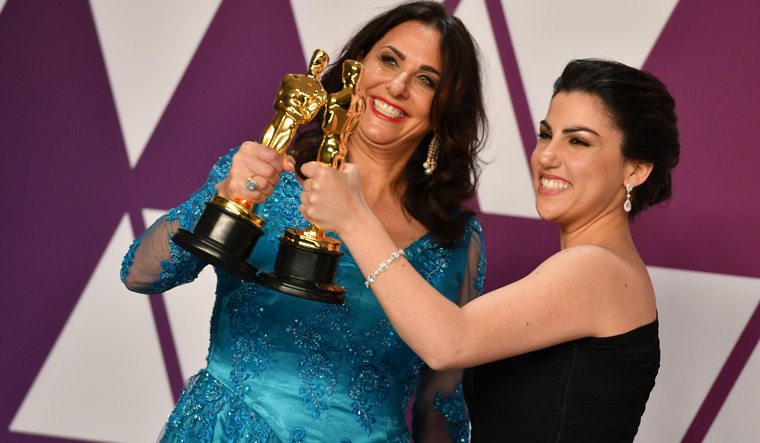 When the short film “Period. End of Sentence”, won an Oscar, many thought it was a good thing that a film on menstruation won global recognition. So what if it exploited the vulnerability of rural Indian girls and women in the process? After all, this exploitation meant that everyone who has been making their living off menstruation got to have their day in the sun.

If you have worked in rural India on menstruation, you will realize that this film is a botched up, exaggerated and highly incorrect representation of the subject in India. The film-makers have some serious answering to do and many apologies to make.

Of all the highly misrepresented scenes and dangerous misinformation that the film promotes, the one that I simply cannot pardon is the scene where a sweet-faced adolescent girl is shown cringing and almost fainting with embarrassment. It is one of those moments which the camera clearly loves and holds on to.

If you think that that was all innocent documentary making on the film-maker Rayka Zehtabchi’s part, read her interview below:

“For example, we walked into a co-ed classroom, unannounced, in India. The teacher asked the 15-year-old students if anyone could tell her what menstruation was. And there’s a shot in the film of a young girl who’s called upon, and she stands up completely petrified. In the film, there is about 30 seconds where she literally cannot say a word. In real life we got about three minutes of footage of her where it seemed like she was going to faint. It was so hard to watch and realize that the shame was so painful. In the edit, part of you wants to indulge in the drama of it and continue that shot for as long as you can…..”

For this moment alone, the film makers deserve to be severely questioned by international bodies that never miss an opportunity to put India in poor light in the name of human rights violation. Don’t they see any problem with this? Or do they just want to remain blind?

How dare they exploit our girls’ vulnerability just for their dramatic indulgence!

This is a violation on so many levels. How can they intentionally walk in unannounced and film minor girls? What about consent? What about child rights?

Further, the film also violates guidelines of The National Commission For Protection Of Child Rights, of the Indian government, which clearly states

In this film, it seems like the makers intentionally wanted to make the young girl uncomfortable to sell the story, thus setting a new benchmark for exploiting children’s emotions.

HAVE THEY NO SENSITIVITY?

A common thread that runs through the film is the seeming awkwardness of the young girls to talk about menstruation, which the film-makers sitting on their pedestal, assume to be period shame.

It is not uncommon in rural India, that young girls and women feel extremely shy to talk to strangers. In fact, if the same girls were asked to sing in front of strangers, their reaction would be just the same. Wouldn’t you react awkwardly if some stranger walked up to you, thrust a camera at your face and asked you to do something out of the ordinary? The film misinterprets rural Indian girls’ and women’s inherent shyness and calls it shame. Actually, they are the ones who created the shame.

My team and I have been doing menstrual sessions for young girls who are very much like the girls in the film, for over 9 years now. Some days, it takes up to an hour to gently veer them away from shyness, to hold a safe space for them and to get them comfortable enough to talk about their experiences around menstruation. It is entirely up to the facilitator to transform their shyness into pride about their body, or let it become shame. We also never conduct sessions with boys in the same room, because we understand that the girls would feel extremely traumatized by the presence of boys who might have teased them about a stain or something else to do with menstruation. What the girls experience in such situations is not very different from having to face an abuser. It is shocking to note just how many of these aspects have been consciously violated in the film.

There is a way of addressing this subject, and one can’t just walk in and capture children’s vulnerability for their lascivious intentions! I cannot even begin to imagine the trauma it would have on the young petrified girls in the film.

The film-makers clearly lack even an iota of sensitivity. Or for that matter, even sense.

WHERE ON EARTH DID THEY GET THAT DATA?

Mr. Muruganathan, can you kindly enlighten us as to where you get this data from? And can the educated film-makers kindly share the research papers from which such data is based?

Let me guess, you cannot do that because there is no such research in existence. And you didn’t care to verify your sources, because it made for a good, sad story about India.

The reality, from my own ground work and from the National Family Health Survey, undertaken across India in 2015-16 indicates that the use of Sanitary Napkins among Indian women is 48.5% in rural, 77.5% in urban and 57.6% total. So what do you have to say now?

Ah, the dropping out of Indian girls from school owing to lack of pads, huh? So let’s come to that.

As if the film isn’t racist enough, we have a promotional video that establishes the White Supremacist thinking inherent in the film. In this promotional video, there are young white women who seem pained by the situation of girls in countries like India where apparently violence, poverty and cultural norms keeps girls from having an education. And attesting to it, is our very own misinformed Ms. Priyanka Chopra who says “Sometimes, girls drop out of school entirely because of their period.” It takes extreme ignorance to make a claim like that without any data or research validating it.

Again, we request the makers of this film and Ms. Priyanka Chopra to kindly produce the research which indicates that girls in India (or anywhere in the world) drop out of school because they do not have access to Sanitary Pads.

But again, you will be left red faced because there simply isn’t enough evidence that links girls dropping out of schools to lack of access to pads. Even if the film-maker and the Indian producer spent 1/10th of their time in procuring valid data, they would have never made such junk. Even more surprising is the involvement of students from Oakwood School in California who run “The Pad Project”. These are academic students who haven’t even done the most basic research of finding source of evidence before jumping to conclusions about their charitable ventures, in their shortcut race to fame.

Clearly, the film makers have no inclination to do research. So consider it my act of charity that I will make it easier for them by sharing published research papers that they can hopefully at least understand.

Studies indicate that 17% teenagers in Canada [1], 21% in Washington D.C [2], 24% in Singapore [3], 26% in Australia [4] and 38% in Texas [5] miss school owing to menstruation. It is said to be around 24% in India. [6] More interesting is that the reasons for missing school have nothing to do with Sanitary Pads or Toilets; in most cases, it has to do with Dysmenorrhea (pain during menses). A study of girls having Dysmennorhea in the U.S showed that 46% miss school due to period pain. [7]

Given the data, the film should actually have been made in their own backyard, given that more girls in U.S drop out of school owing to period pain. But again, that wouldn’t get you an Oscar. In fact, like this data, it would hardly even get noticed. To win an Oscar, they will need to cook up stories about India. That, they did well.

AND HOW MANY PADS DID YOU SELL?

The film considers it their success that 18,000 pads were made after the machine was installed. The real success will depend on how many pads were sold over a period of at least 2 years. I am yet to come across even a single project of Muruganathan’s that has sustained more than a couple of years. Poor pad quality, difficulty procuring raw material and frequent machine breakdowns have made it a failed enterprise. My other write-up “Padman: How he shot to fame by selling shame” has more on this. So why is he still so popular?

Because there are international funding agencies that invest in his company to ensure that a market for pads is created in India. His work is no social cause. Make no mistake, his company Jayashree Enterprises is a for profit entity. He has never been able to create a sustainable business model, and has only survived owing to the international funding that he has been receiving from accelerators such as The Girl Effect, who put him on platforms such as TED.

Muruganathan is the perfect sitting duck for pad manufacturing giants, who will simply throw him out once he successfully establishes a market for their entry. So far, his product has never been able to take over sales of any commercially available sanitary napkin, and that makes him a perfect choice for the funding agencies, because is so easily replaceable.

ARE PADS EVEN A SOLUTION?

Does it make any sense to project a Sanitary Pad as a solution? Anyone with even the basic knowledge of biology should understand that a Sanitary Pad (or for that matter any menstrual product used) has no relation to any menstrual disorder, be it dysmenorrhea (period pain), menorrhagia (heavy menstrual bleeding), PCOD, Endometriosis, etc. And again, there is NO research that proves beyond doubt that using menstrual cloth can cause Reproductive Tract Infections or Menstrual Disorders. So why again are we dismissing cloth and promoting pads?

In addition to false data, misrepresentation and violation of child rights, I will leave it to the readers to imagine the absolute environmental irresponsibility that the film promotes by pushing for disposable menstrual products in villages, where, for hundreds of years women have naturally chosen environmental friendly methods like cotton cloth.