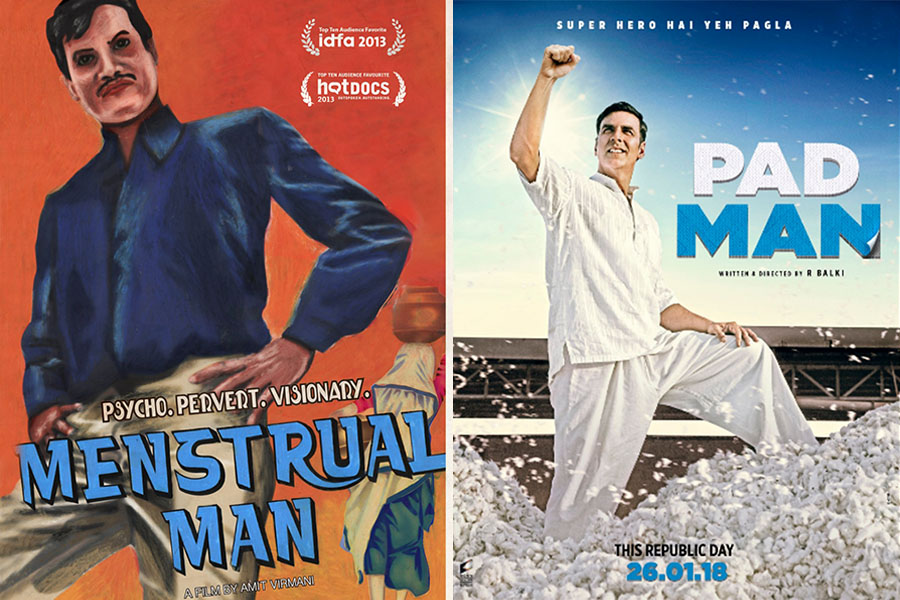 “If we want to give our daughters Sanitary Pads, we’d much rather buy the good quality ones available in the market. What do you think we are…….trying to get rid of some cheap stuff by dumping it on our girls?”

These words came from angry mothers of girls from a government school in rural Karnataka. The year was 2010. The “cheap stuff” in question was free Sanitary Napkins distributed through Rotary, made from a low-cost Sanitary Napkin manufacturing machine. The machine was the one set up by a person called Muruganathan, at Mount Carmel College in Bengaluru. The person who facilitated this free distribution was me. That was my first and last stint at distributing Sanitary Pads or any other menstrual product in villages.

Like many an arrogant social worker, I too began my work in this space 8 years ago assuming that I know better than the women in rural India. To be honest, I had even tried the pads made by Muruganathan’s machine before distributing them. I found the quality highly questionable – it would hardly last an hour before needing to be changed. And even the adhesive used was of such poor quality that when one tries to remove it, it just sticks and then the pad rips apart making a mess of the whole situation. Yet I thought “Well, it is for THEM. This should be enough.”

I wonder if the Twinkle Khannas of Bollywood who are suddenly praising and promoting Padman, have ever used his product. Do they go around in their designer outfits and costly vehicles wearing a leaking pad which needs to be discarded every hour? Or are they among those who think “This is good enough for THEM”?

Who is this THEM that we so selflessly fight on behalf of, in our arguments on menstruation? If celebrities and their recent comments are to be believed, then this THEM is 82% of Indian women who apparently have no access to Sanitary Pads and therefore resort to using alternatives like ash, sand, rags and what not. The poor THEM.

My team and I spent the last 8 years of our work actively trying to find THEM. We travelled and interacted with over 20,000 women across Bihar, Jharkhand, Nagaland, Assam, Manipur, Meghalaya, Maharashtra and extensively in Karnataka. The naxal hit villages in Jharkhand, the mud huts in Bihar, the tribes in Assam and North-East, the interior villages in Maharashtra and over 7000 women and girls across the length and breadth of interior Karnataka. It is from these women that we LEARNT how menstruation should be revered, how the first period should be celebrated, how the quality of menstrual blood can be a great indicator of our overall health, how we can prevent menstrual pain through simple dietary methods, how to manage the bleeding naturally, and how our menstrual cycles are meant to sync with the earth’s natural cycles.

No, we did not find the shame that is automatically assumed about rural women and their periods. Nor did we find THEM who used ash and sand and husk and are suffering from Reproductive Tract Infections for want of a Pad. We also asked journalists who quoted this worrying statistic, but they had neither met the sand-husk-ash using women, nor had they ever seen the published paper from which this quote is derived.  But surely we thought, we must be wrong…… after all, every NGO, every media article and every conference on menstruation is based on pitying THEM.

How could THEY not exist?

We have become so doubtful about our senses, that it is far easier to trust somebody else’s ‘data’, than our own first-hand experience. So we turned to scientific research in our last desperate attempt to find THEM. If the state of Indian women is indeed so bad when it comes to Menstrual Health, surely, there would be published research which proves it? We studied over 150 published research papers from across the globe, and especially of women in India. Researchers, activists and doctors from reputed global institutions such as The Society for Menstrual Cycle Research (Boston) helped us gain access to published research papers. Here is a gist of what this study revealed:

Research that studied the use of menstrual absorbents as far back as in 2005 in rural India, showed that around 35% to 40% women were already using Sanitary Pads at that time.

No paper showed evidence that use of a particular menstrual product such as cloth, is related to any menstrual disorder or reproductive tract infection.

No paper indicated that girls in India drop out of school owing to menstruation and lack of Sanitary Napkins.

If we compare the prevalence of menstrual disorder such as Menorrhagia (Heavy Bleeding) globally, we find that it is far lesser among Indian women (around 18% to 20%), and much higher among women in developed countries like England (up to 52%) who are obviously pad/tampon users.

There are more girls missing school in New York City (42%) during menstruation, than in any village in India, where it is estimated to be around 24% absenteeism.

In all cases where girls miss school, the reason was owing to Dysmenorrhea, or period pain and had nothing to do with availability of Pads.

The complete findings of this study is detailed in the write-up “Menstruation: Research, Rhetoric, Reality” which provides link to 100 papers which have been quoted throughout the write-up.

More recently, the National Family Health Study of 2015-16, undertaken across India, revealed that the use of Sanitary Napkins among Indian women is 48.5% in rural, 77.5% in urban and 57.6% total.

Over the years, we have been invited by at least 10 NGOs across India who bought Muruganathan’s story and the invention in the hope of doing good. They wanted us to come and ‘convince’ the rural women to buy his Pads, because it simply wouldn’t sell.

If the product quality is not good, and there isn’t even data to support the need for Padman’s invention, then how on earth did he get so famous?

At a Boston held conference in 2015 on Menstrual Health & Reproductive Justice, a documentary called Menstrual Man, on the life of Muruganathan was screened and a discussion followed. The poster subtitle read ‘Psycho. Pervert. Visionary’.

I attended that screening and for a long time afterwards was disturbed in trying to put a finger on the look of the mostly white audience who watched the film.  Was it pity on the projected shameful state of Indian women? Was it disgust at how obnoxious Muruganathan was and yet one couldn’t deny his ‘greatness’ because he came from a poor background? No one dared name it.

This same jumbled emotion is what media houses like BBC have been throwing our way. In Muruganathan, they found a hero through whom disgust and pity can unfold effortlessly. To shoot from his shoulder and create shame among Indians, seemed so much easier. Shame is the best marketing tool, especially when it comes to women’s products. Businesses are thriving by putting India in poor light, and Muruganathan was making it happen for them. He became the apple of foreign media’s eye.

The way Muruganathan has shot to fame without any valid reason, is a great indicator of who we are as a society, and how media can make us doubt our own experiences. The question is not to him. He is a businessman, doing whatever it takes to make his living and his identity.

The question is to the rest of us.

We, who have never used his product and yet promote it. We, who have not had a real conversation with even one rural woman and yet make assumptions about what they need. We, who would believe a statistic because some newspaper says so, and yet would never speak to even 10 women around us to verify it. And we, the men, who have not and can not experience what it is to bleed, but feel it is our responsibility to ‘educate’ the ignorant women on managing her bleeding.

Why is it, that we are so ready…no, Eager, to believe the worst about our women and our nation, and would raise concerns if we were told that Indian women actually have better menstrual health compared to their global counterparts?

Shame has been sold to us in a nice package with celebrity endorsements. And we have bought it.

A candidate being able to correctly answer all of the questions encompassed in Cisco 200-125 dump is very likely to pass the exam with flying colors, so if I were you, I would jump at the chance to get a high score.
210-260 pdf
Most CCNA study guides are about 800 pages so there are lots of concepts and nuisances that are covered and we highly recommend you purchase a CCNA study guide to assist you in your self study efforts.
cisco
Bryant Advantage. The Bryant Advantage probably has the most comprehensive study package that is well written using lots of analogies so it can be understood easily by new CCNA students as well as seasoned Cisco professionals. It is on par with the Cisco Press as far as price and another nice benefit is he also has a lab workbook too. We also sell the Bryant Advantage CCNA Lab Hardware Topology to compliment his lab workbook so you can follow through all the labs step by step.
http://www.itcert-online.com/
It is written in layman’s terms for very green students and it the cheapest solution. However I have found that it does not go as in-depth to some topics as I might like.
200-125 vce
If you want to pass your ICND1, ICND2 or CCNA exam on the first try, it is essential you have a sound, effective study plan that is proven and other Cisco CCNA students have followed to successfully pass their 200-120, 101-101, or 200-101 tests.
300-115 pdf
It is actually suggesting that the applicants preparing for CCNA Routing and Switching 200-125 Cisco Certified Network Associate, use both the preparation approaches. This will help all applicants to earn the assistances of both the approaches.