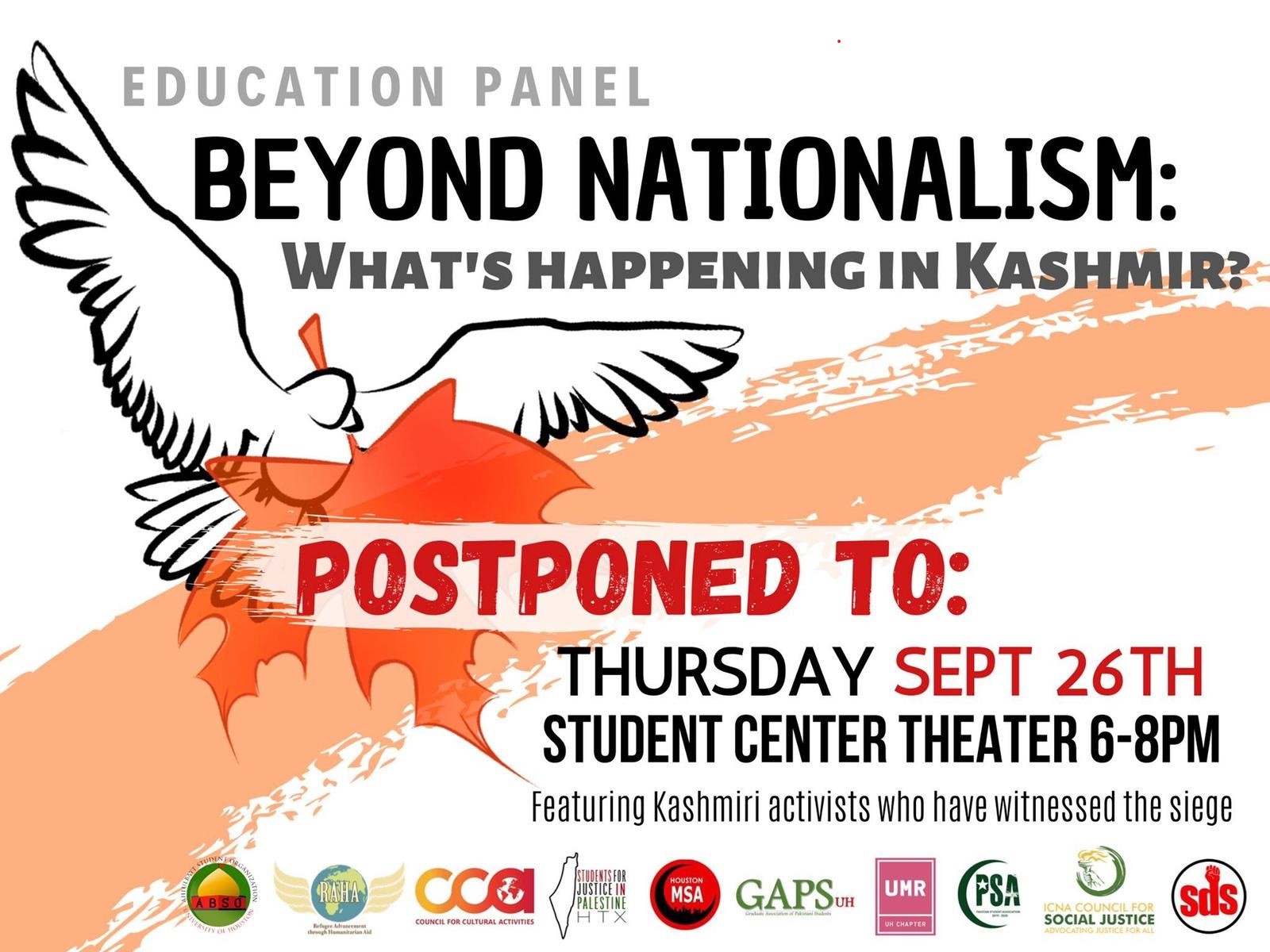 Distinguished Members of the Press

Re: Anti-India and Anti-Israel Propaganda at The University of Houston

This is a Press Release by Concerned members of the Indian American community in Houston who witnessed a frightening and unabashedly Anti-India and Anti-Israel event at the Student Center of the University of Houston between 6:00 ~8:00PM on Thursday Sep 26th, 2019. The event was originally advertised as below:

A so called Educational event featuring Kashmiri Activists from the beginning turned out to be a full-blown Anti-India, Anti-Israel & Anti Hindu event (Strangely co-sponsored by a slew of unrelated and unknown organizations mentioned below)!

The event began with a propaganda video of purported victims one of whom threatened to “Assassinate” the Prime Minister of India- Mr. Narendra Modi!!! The chilling video (https://www.youtube.com/watch?v=O_MWs-lBZqY) was a dangerous attempt to excite and radicalize young Muslim students at UoH especially from Pakistan.

Incidentally, Mr. Modi had been accorded a grand reception this past Sunday, September 22nd, 2019 by 60,000 Indian Americans of all religions at NRG Center Stadium, Houston and a Bi-partisan group of Congressmen and Senators personally led by Mr. Donald Trump, the President of the United States of America.

The Organizers and the Hosts began positioning themselves as backers and supporters of people who chose to protest PM Modi’s visit. They set the agenda by churning figures that were mind numbing and false:

Some videos of the distorted narrative that we could record are given here:

The members of Indian American community who bravely attended the event were heckled and never allowed the decency to ask questions on the Kashmiri Pandit genocides. Even at the end when some of the members sought Police protection to be able to ask questions on rapes and murders of the Pandit community, the organizers chose to belittle and drown out the questions in the din. The reluctant and vague answers in the end seemed to justify the genocides on the Pandits.

We shall be providing all the information, recordings and pictures to University of Houston, Law Enforcement and Intelligence Agencies so they can act upon such dangerous elements.

Our humble prayer and appeal to all peace and humanity loving citizens of America and the world is to never become a propaganda platform for Jihadis and their supporters.