Church In India And The Politics Of Religion 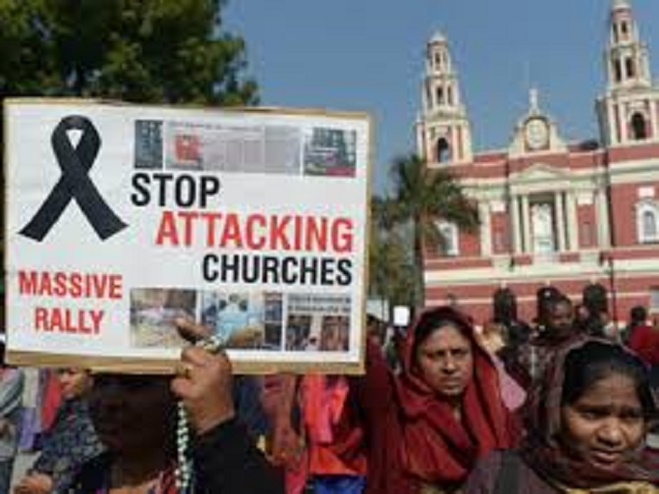 Being born in a Catholic Christian family of Mangalore, I had to undergo all the religious dogma resulting from teachings and preachings. I was a fanatic Christian till my youthful days and hence had religiously followed Christian doctrines and had believed that Christ was the only savior. But, I developed a conflict in my mind, when I observed the lavish, non-accountable, and indifferent lifestyle of the clergy, in complete contrast to their claim of ‘living for Christ’ after dedicating the social life for a ‘higher cause’. After a deep study, I had to conclude that there is no relation between morality and religion, though it was taught to be so. Often, I found religious teachings are quite contrary to basic moral values.

So, after years of research into the religion of ‘only way to god’, I had to conclude, it was more of a political setup to garner power using Jesus Christ as a commodity, than a religion with spiritual goals. Clergy (the bishops and padre) have immense power and authority, without accountability and the laity (ordinary Christians other than clergy) have only an accountability, without any authority.  The church system is such that ‘democracy’ is a hated word there and the hierarchy is the norm, wherein the chosen one (from God) is the shepherd and all laity are sheep, and the shepherd makes the policies and the laity have to follow. The clout of the religion/clergy is so strong and powerful that one cannot think of coming out of the clutches of it in the entire lifespan. From birth till death or even after death, the dead body should be buried in the cemetery over which clergy have control.

So, in between, how long a layman can run? The naming of the child is coincided with the christening ceremony during which child is baptized and officially inducted as a member of the church. Since then he/she has to grow in faith without questioning the clergy or the faith, but being obedient to the authority of church as put forth in the hierarchy. At no stage, the laity has any right to think or express freely and instead they have to follow the dogma and the system as an obedient sheep.

More often, we hear the claim that Christians in India are being persecuted by the majority Hindus or their outfits. I have heard this, since 1977, when the Congress had lost power at the center for the first time. As a young boy, it impacted my mind and I had felt really scared to be among majority Hindus. But, later when I made a research into the events during the Janata party rule, there was no persecution in reality. But then, I thought this ‘victim of Persecution’ feeling may have been due to wrong perception, and so I tried to clarify and debate with the concerned, whenever I had an opportunity.

Somewhere in 2005, being the member of varado council of the church comprising of eight neighboring churches, I had an opportunity to debate this issue. The initiation was from the church hierarchy itself, which had issued a circular to the members to come prepared for a discussion on communal threats, and the circular had made references to several instances of supposed persecution of Christians, claimed to have happened over the previous couple of decades. The claimed incidents, included reported attacks on padre, rape of nuns and also criticism of Mother Theresa, which were supposed to have happened in the northern India, where our clergy are on a missionary work.

When I examined in detail all these claimed incidents, I found no merit suitable to be termed as ‘persecution’, but were instead isolated incidents of violence.

A strange thing happened during the debate on persecution. I questioned the very basis of the conclusions on which the persecution debate was built and sought to know more details about the incidents listed. But, to my surprise, they had none of it, but instead, they wanted me to believe them to be true, as the supposed incidents were recorded by the heads of dioceses (comprising of three revenue districts). In short, the debate was to be only about how to counter communalism, irrespective of whether it existed or not. At this juncture also, I did not draw any inference, but wanted to wait and watch the final results of the debate that would take place at the diocese level, after receiving feedback from lower levels. I was expecting them to take up the points raised by me questioning the very basis of their conclusion about persecution. But it was not to be.

All they were interested was in spreading panic among the laity about a nonexistent persecution. This confirmed my earlier doubts that all that the clergy try to do is spread fear and panic by systematic design with some ulterior motive. They want us to live in fear of the majority Hindus, so that they can carry out their hidden agenda. This perception of persecution is created due to political and other reasons and is constantly fed to the masses through Sunday preaching every week, so that the laity believe them without questioning.

The emergency that entire India stood against was of no botheration to our clergy, but the defeat of the very government, which had imposed emergency was terrifying. Soon, after the Janatha party assumed office in 1977, we Christians were sermonized by the clergy that sky has fallen down and the new government will deport all Christians in India to Europe. So we were made to bring out rallies and protests, and thus a spine chilling wave of fear and panic was sent across the community.

Though, I was a small boy that time the slogans and speeches delivered then still echo in my ears. Since then, I have been trying to find out what exactly did the government of the day did or intended to do to Christians, but to this date I haven’t got the answer. All along, I questioned many priests and lay leaders to understand the logic of those protests of 1977, but no suitable answers have I found till today. Some said, it was actually not directly against the Christians, but some moral question about a bill introduced by a private member in parliament! But this kind of panic and fear mongering continued, whenever non-Congress governments assumed the office.

During V P Singh’s government, the second biggest fear mongering propaganda took place and we were made to protest on the pretext of some rape of the nuns in Uttar Pradesh and Madhya Pradesh. Later, protests were again held, when Mr. Devilal, the then deputy PM, supposedly made a statement to send all Christians to Europe. During 1997, a strange thing happened. We were informed through Sunday sermons that a padre in Dumka of Jharkhand (then Bihar) was attacked by a mob, stripped, paraded and handed over to the police. The police, then, arrested and locked him up under the charges of sexual abuse.

According to them, since he is a Christian padre he symbolized all Christians, so the attack on him amounted to an attack on Christianity. So, we were again called upon to protest, and we followed this religious order obediently and a huge crowd of about 80,000 people from all over the diocese (comprising of three revenue districts) gathered at Central Maidan in Mangalore and staged protest. I was curious to know the details of this case, so I tried to gather information from all the available sources. I came to know that the said padre was a principal in a school/college and was in a habit of sexually exploiting the young students for some time. One day, a student narrated this at home and the parents and the villagers, who were furious on hearing this, barged into the school campus, dragged the padre, and handed him over to the police for action under IPC for sexual assault.

After studying this incident, I wrote a letter to the bishop, who headed the protest committee and to a few other so called leaders, who arranged the protest. My logic was simple. The incident happened in a school and not in a church or a religious place. So it is improper to portray it as a religious attack. If that person was a layman instead of a padre, he would have met the same fate. Even if he was a non-Christian, he would have met the same fate. Mob attacking him was wrong, so at the most we could have highlighted this fact. But portraying him as a representative of Christianity was incorrect and grossly unfair. So, I had to question them the very sanity of their decision to make it an issue of persecution. I also questioned them, if that padre is proved guilty of sexual abuse in the court of law, what would be their reaction? Since we projected him as a symbol of Christianity, his conviction will make us all appear like a community of rapists!

This questioning of mine demolished their claim of persecution and I was assured that they would be cautious in future. As a result, such mass protests over supposed persecution at a distant place stopped for a while. But, a change of strategy was in the brewing. Thus, came September 14 of 2008, where we saw “attack on church” in our own Mangaloru. I have all the reasons and circumstantial evidences to believe that this so called church attack was orchestrated by the bishop of Mangalore himself. Since, Mangalore is a very important destination, as far as Indian Christianity is concerned, the clergy were keen to have some ‘persecution’ in the very vicinity of Mangalore.

The city is known as the Rome of the east because of its size and scale of ‘divine calling’.  A large number of bishops, padres, and nuns come from this diocese. In fact, no other diocese has produced so many bishops the world over. So, anything happens here with regard to the Christian community, becomes world news. Hence, it was essential that something happen here to Christians, to make it into a world news and show India in a poor light all across the globe. September 2008 gave this golden opportunity! Thus, in many a sense, Mangalore proved to be the trend setter for the rest of India.

Many of the recent incidents of ‘church attacks’, including the one in Delhi, Kolkata, and elsewhere, have often followed the trend set in Mangalore and were equally politically motivated to defame India, before the western world.