The Myth of beef-eating Hindu 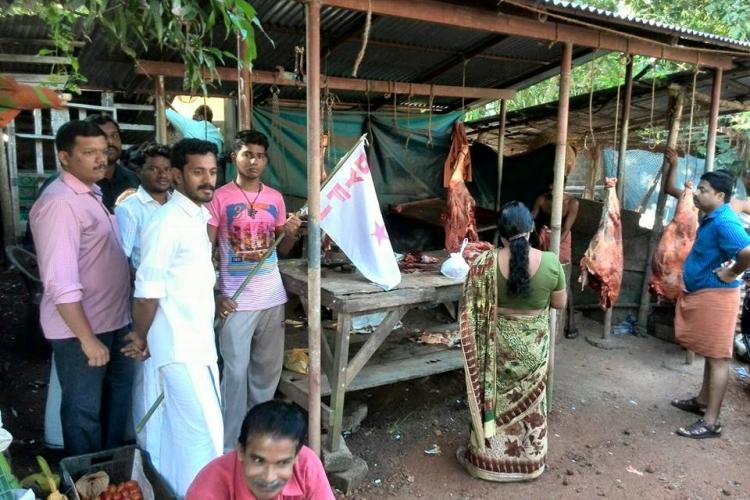 In the past couple of years, whenever they get an opportunity, a few commies and the chrislamists in Kerala used to get charged upon their appetite for Beef. The English media used to play along by serving all kinds of madness by even branding the communities dedicating their lives for the protection of cattle as terrorists. Spiritually semi-literate Indians relentlessly run the propaganda to show Beef is an integral part of the culture of Kerala and North Eastern states of India.

Perhaps, the leftist and chrislamist attempts to portray Kerala distinct from rest of India so that when the Jihadi – Crusaders from JNU shout ‘Kerala Mange Azadi’, entire Kerala shall play along. However, recently, some hinduphobes from the right-wing also started to peddle the propaganda of ‘Cow meat is popular among Kerala Hindus.’ Some even went ahead seeking approval for beef-eating among the Hindus. However, history and ground realities in Kerala and Northeastern states of India shows a different picture.

“A fifteenth-century Chinese observer says that the two communities had agreed to abstain from the consumption of Beef and pork and that respect for cows were the conditions for settlement for Muslims.”(3). Kamal-ud-din Abdur Razzaq, the emissary of Shah of Persia to Vijayanagar empire wrote about Kozhikode: The inhabitants of Calicut are adventurous sailors. They are known by the name tchini betchagan (sons of chinese) and pirates do not dare to attack the vessels of Calicut. In this harbour, one may find everything that can be desired. One thing alone is forbidden, namely, to kill a cow, or to eat it’s flesh: whosoever should be discovered slaughtering or eating one of these animals would be immediately punished with death. When Vasco da Gama first came to India, the Samuthiri of Kozhikode welcomed him but on one condition; “You must not slaughter the cows.” An incident depicted by Gundert in Kerala Pazhama shows the early Portuguese cow killing during the second voyage of Gama.

It was the European Christians who introduced cow meat-eating in Kerala. Not only the Moplahs, but the Syrian Christian community also abstained from consuming cow meat following the law of the land. Nasranis (Early Syrian Christians) used to eat meat, fish and eggs but abstained from cow meat. In a zest to catholicise the Syrian Christians, Bishop Menezes even said Nasranis that it’s unchristian to abstain from cow meat. (4). The adherence of the Portuguese to the cow meat was always a problem in Kerala. Companions of archbishop Menezes killed a cow during his visit to Angamaly, and that led the Nazranis of Angamaly to lie to King of Mangattu. Travancore kingdom refused Portuguese in business because of their violence on cow and temples. Aithihyamala, a Malayalam chronicle depicts that Shaktan Tampuran of Kochi beheaded a Mohammedan for killing a cow.

The Paraya (pariah) community used to consume the meat of dead cattle. They were not killing any animal but ate only the flesh of dead animals whose skin they used for making hide. The troops of Tipu and Hyder Ali of Mysore used to force-feed Hindus of Kerala to convert them into Islam. P. Raman Menon, the biographer of Shaktan Tampuran, the King of Cochin during Tipu’s invasion, writes, “There was hardly any cowshed left in Malayalam lands where the Mysore Tiger did not enter.”(5). K.P. Padmanabha Menon writes, “Thousands upon thousands were forcibly converted and compelled to eat Beef, the highest sin a Hindu can commit.” (6)

Even today, traditional Hindus of Kerala do not devour cow meat, although the media and intellectuals want the world to believe otherwise. The change in demographic pattern in the past centuries, communist influences in the government set up, and education along with the cultural transformation brought by gulf migration has increased the availability of Beef in public space. However, Hindus generally do not cook or eat Beef in their home. Most of the loud noise showing beef in Kerala comes from the high decibel presence of leftists and abrahamists in the narrative building mediums. The silent majority of Kerala still poignantly adhere to the ways of the ancestors, devotion for the devatas.

Now looking into the Northeastern states, Hindus of Bengal strictly abstain from beef consumption. Marxism could never make political inroads in India but managed to create an anti-Hindu class which still controls newsrooms and academia. Most of this anti-Hindu class ruling newsrooms are the English speaking Bengali elite who however do not identify themselves with the devout, traditional Hindus living in Bengal. Such an elite class cannot be considered as representative of average Hindu Bengali in the rural Bengal.

Northeastern states are heavily Christianised, with almost 100 percent demographic shift. So the idea that beef consumption in the Northeastern states is by Hindus can only be a baseless propaganda. “The earliest entry of the Christians into the Northeast can be traced much before the advent of British rule. Milton Sangma (1987) has mentioned that the earliest recorded visit by the Christian missionaries to Northeast India was in 1626 by two Jesuit missionaries”. (8). Ahom Kings could keep missionaries away from Assam until the Treaty of Yandabo (1826). Still, Christian expansion in the rest of the northeast was possible only during 1931-51. After the formation of the Indian republic, Nehru put the North-Eastern states under foreign ministry giving the American missionaries full autonomy. Sikkim saw heightened proselytisation after joining the Indian union.

Regarding the consumption of cow meat in northeastern India, cattle rearing has been very rare in the hills due to unfavourable terrain. The royal proclamation of king Punshiba (1404-32 A.D.) of the Meities mentions cow slaughter as a punishable offence (9). The Bru tribes who are still not converted to Christianity abstain from the consumption of cow meat. The unconverted people from the tribes in the populous Brahmaputra valley always keep themselves away from cow meat.

Cows in Buddhist Bhutan wander the streets & no one gets mad at them for blocking the road. They import meat from neighbouring India if they want to eat. In Buddhist majority Burma, the British colonial administrators posed a threat to Burma’s cattle, according to Ledi Sayadaw, as they had no qualms about eating beef. The beef boycott movement became very successful and was promoted by monks. The questions asked by the great daimyō, Toyotomi Hideyoshi to the Portuguese missionary Coelho throws light to the aversion Japanese maintained for cow meat. He asked, “Why do you do such unreasonable things as eating useful animals like horses and cows that serve people?”

An overview of pre-Abrahamic practices in the cultures similar to northeastern India and the history of cow protection in Kerala shows that Indic communities, in general, used to abstain from consuming cow meat. The tendency of our society to believe everything peddled by the leftists coupled with the efficient propaganda machinery working to create political narratives for short-sighted material gains often creates unwanted myths hurting the Indic civilisation as such. The myth of beef-eating Hindu in Kerala and North-Eastern parts of India is such an ill-informed, cunning promotion that can only help the subversive global powers. An urban educated Hindu who happened to have eaten beef can undergo shuddhi rituals and try to upgrade oneself into a sincere practitioner of the necessary mandates of dharma instead of trying to bend the rules for one’s convenience. If Hindus bend rules and disregard the fundamentals fearing the conversion of delinquent people from Hinduism, time isn’t far for Hinduism to look like Christianity.

1. Duarte Barbosa, “The Book of Duarte Barbosa: An Account of the Countries bordering on the Indian Ocean and their Inhabitants.”

4. C. I Issac, “Evolution of Christian Church in India.”

9. Naorem SanajaobaManipur, Past and Present: The Heritage and Ordeals of a Civilization, Volume 4

10. Japan: her first dalliance with the west

Anjali George is an activist, writer and a reformer who is extremely passionate and ardent about the preservation of Indic and indigenous cultures. She is one of the pioneers behind the ‘Ready To Wait’ movement, that was launched to ascertain the rights of the indigenous women in opposition to a politically motivated attack on the tradition of Sabarimala temple. She serves on the Board of Frankfurt City's Council of religions, Indic Collective, and Shaktitva foundation. She is also the chairperson of People for Dharma.

On The Nair Community Of Kerala And Their Sambandham System

Dangerous Liaisons: When your Father is an Urban Naxal