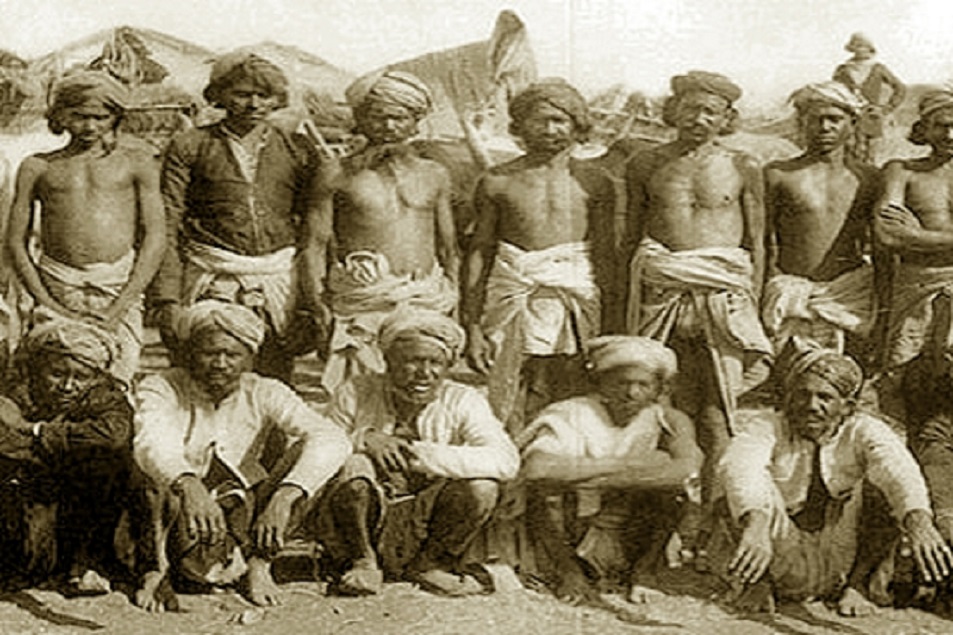 In India, as in the rest of the world, religion was originally a tribal affair. Tribes in every corner of India, as of the inhabited world of the time, were followers of different tribal religions. As in other parts of the world, the rise of civilization in one particular part of India led to the development of one particular kind of religion among the different tribes and people spread out over a certain area. This area was the north and northwest, covering particularly northern Pakistan, Punjab, Haryana, Delhi, Himachal Pradesh and the western half of U.P., and extending to some neighbouring areas. The area still covered many different tribes, notably the conglomerates of tribes known to traditional Indian history as the Druhyu, Anu and Puru. In present-day linguistic terms, this could be described as the Proto-Indo-European area.

The religion which developed in this area concentrated on worship of the elements (the sun, moon, clouds, rain, sky, earth, rivers, etc.) and worshipped the Gods perceived in these elements through sacrifices offered through the medium of fire, and through the medium of sounds couched in the form of hymns. This religion is found in the Rigveda (the religious book of the Puru tribes), the Zend Avesta (the religious book of the main groups among the Anu tribes who migrated westwards into Afghanistan), and in the religious practices of the ancient European priests, mainly the Celtic Druids (emigrants to Europe from among the Druhyu tribes). Other versions of these elements with more developed mythologies are found in the other European religions (Greek, Teutonic, Lithuanian, etc.).

In India, after the emigration of the Anu and Druhyu tribes, the religion of the Purus, with its highly developed priesthood and rituals, spread over the rest of the country along with Vedic culture. As the religions of the different tribes all over the country converged into the increasingly diluted Puru religion, the original Puru (Vedic) rituals and myths increasingly came to occupy the position of a nominal upper layer in a new multi-layered and multi-facetted religion which was rapidly becoming the common Pan-Indian religion of the sub-continent. When this pan-Indian religion came to be known as Hinduism is a matter of irrelevant dispute. That it is known as Hinduism is an indisputable fact.

But there was a big difference in the spread of Hinduism all over India and the spread of Christianity all over the world. Unlike Christianity, which demonised the Gods, beliefs and rituals of the religions which it sought to uproot, destroy and supplant, Hinduism accepted and internalised the Gods, beliefs and rituals of the tribal religions which converged into it. The result is that today the most popular Hindu deities in every single part of India are originally tribal Gods: whether Ayyappa of Kerala, Murugan of Tamilnadu, Balaji of Andhra, Vitthala (originally) of Karnataka (Vithoba of Maharashtra), Khandoba of Maharashtra, Jagannatha of Orissa, etc., or the myriad forms of the Mother Goddess, with thousands of names, in every nook and corner of India: every single local (originally tribal) God and Goddess is revered by every Hindu in every corner of India, in the form of the kuladevata, the grihadevata or the gramadevata.

In time, of course, myths were formed nominally associating many of these deities with one or the other of the main Gods and Goddesses of Puranic Hinduism as their manifestations, these Puranic Gods themselves being additions from different parts of India to the Hindu pantheon (or originally Vedic Gods like Vishnu and Rudra with basic characteristics adopted from the other local and tribal deities). But these associations were not an imposition “from above”, they were the result of popular local myth-making and part of the consolidation of the national popularization of the local deities: the deities retained their local names, forms, rituals and customs, and became all-India deities, objects of pilgrimages from distant areas.

But it is not only in respect of “Gods” and “Goddesses” that Hinduism freely and respectfully adopted from other tribes and religions: even the most basic concepts of the Hindu religion are originally elements adopted from the tribal and local religions from every part of India. The original Puru (Vedic) layer of religion which forms the pan-Indian umbrella of Hinduism was originally more or less the religion depicted in the Rigveda: the worship of Indra, Varuna, Mitra, Agni, Soma, the Maruts and Ashvins, and other specifically Vedic deities (including Vishnu and Rudra, who later become the most important Puranic Gods), and the main religious rituals were the Agni rituals (homa, yadnya, etc.) and the Soma rituals. The Soma rituals are completely defunct today (in fact, no-one knows the exact identity of Soma), the Agni rituals are still performed, but only during major ceremonies (birth, death, weddings, ritual inaugurations of houses, etc.) and on other major occasions, and the major Vedic Gods are minor figures of Puranic stories.

Practically every single basic feature of Hinduism today was adopted from the religious beliefs and rituals of the other, originally tribal, religious traditions of the people from every single corner of India as they all converged into Hinduism. To begin with, Idol-worship which is absolutely the central feature of Hinduism and which includes (a) the worship of the lingam, “rude blocks of stone” with eyes painted on them, or roughly or finely carved or cast images of stone, metal or some other material, (b) treating the idols as living beings (bathing, dressing and feeding them, putting them to sleep, etc.), (c) performing puja by offering flowers, water and fruits, bananas and coconuts, clothes and ornaments to the idols, (d) performing aarti by waving lights and incense before the idols, (e) performing music and dance before the idols, (e) partaking of prasad of food offered to the idols, (f) having idol-temples with elaborate carvings and sculptures, with sacred tanks and bathing ghats, temple festivals with palanquins and chariots, etc. (g) applying sandal-paste, turmeric, vermillion, etc. on the forehead as a mark of the idols, etc. This entire system in all its variations was adopted from the various practices of the people of eastern, central and southern India, along with the Gods and idols themselves.

All the basic philosophical concepts of mainstream Hinduism are likewise adopted from the tribal and local populations of different parts of India: the concept of rebirth and transmigration of souls, the concept of auspicious moments based on the panchanga and the tithis, the worship of particular trees and plants, animals, birds and reptiles, of particular forests, groves, mountains and rivers; the worship of ancestors in elaborate ceremonies, etc., etc.

The fact is, Hinduism can never be in true conflict with any other religion (other than the two predator Abrahamic religions which themselves choose conflict with all other religions) since it has no particular God, Ritual or Dogma to impose on the followers of other religions. In itself, Hinduism contains the seeds of every kind of philosophy, and is comfortable with all streams of thought, and not necessarily to do with the worship of “Gods”. In Hinduism, we find all kinds of atheistic and materialistic philosophies, the most well known being the Lokayata philosophy of Charvaka, who believed that there is only one life, that there is no such thing as an afterlife, or heaven or hell, or rebirth, and that our only purpose in life should be to maximize our pleasures and minimize our pains.

The very basic texts of Hinduism contain the seeds and roots of agnostic philosophies, from the Rigvedic Nasadiya Sukta (X.129. 6-7, which says: “Who verily knows and who can here declare it, whence it was born and whence comes this creation? The Gods are later than this world’s production. Who knows then whence it first came into being? He, the first origin of this creation, whether he formed it all or did not form it? He whose eye controls this world in highest heaven, he verily knows it, or perhaps he knows not.”) to the Upanishadic speculations which reject everything, after deep discussion, with the phrase “neti, neti”: “not this, not this”, i.e., “no, this is still not the ultimate truth”. And then of course, there is every kind of deistic, henotheistic, pantheistic, polytheistic, and every other kind of -theistic philosophy, including even (but not exclusively) monotheistic philosophy (minus the hatred of “other” false religions and false Gods, and the concepts of permanent Heaven for believers and Hell for non-believers, characteristic of Abrahamic monotheism).

This is not to say that intolerant strands are not found in Hindu texts: among the countless philosophies that flowered within Hinduism there could be found stray voices of intolerance and hatred, but they are just that: stray voices in the wilderness, which never became the voices of mainstream Hinduism, unlike in the Abrahamic religions, where they represent the Only Voice.

Hinduism thus represents the opposite end of the spectrum from the Abrahamic religions: of the four possible attitudes towards other religions and religious beliefs (respect, tolerance, indifference and hatred), Hinduism represents respect for all other religions and streams of thought and philosophy, while Christianity (as also Islam) represents hatred. This is the central thread of Hinduism: even the Manu Smriti enjoins that when a king wins a victory over an enemy king and enters his (i.e. the enemy) kingdom, the first thing he must do is to pray and worship at the feet of the deity of that king and kingdom. The Bhagawad Gita, even as it asks Arjuna (and presumably mankind in general) to abandon all other dharmas (i.e. duties, not religions) and surrender to the Supreme Entity (an abstract concept although nominally represented by “Bhagwan Shrikrishna” here), assures him that whatever form of worship he indulges in, that worship reaches Him (i.e. that Supreme Entity) and Him alone – a far cry from the “One True” God and “One True” form of worship as opposed to other “false” Gods and “false” forms of worship classified by Christianity (and Islam).

This is the reason a Hindu would not think twice before bowing his head in genuine reverent worship before an idol of Osiris or Isis in Egypt, Quetzalcoatl or Kulkulcan in Central America, or Kuan Yin in China (or, indeed, before visiting churches and dargahs, not realizing the difference between non-Abrahamic and Abrahamic religious entities). This is the reason why the Zoroastrians who fled Iran from Abrahamic persecution, and the Jews who fled ancient Palestine, found safe, respectful and helpful refuge only in Hindu India and nowhere else. And this is also the reason why the tribal Gods and tribal religions in different parts of India which, either due to isolated location or out of choice, did not choose to merge, or merge fully, into the greater pan-Indian Hindu entity (where, in any case, their distinctive characteristics would only have been respected, preserved and popularised everywhere) continued to freely maintain their distinctive identities to this day – i.e. till the advent of the predatory missionaries.