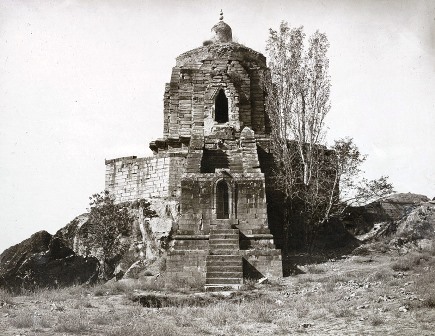 According to this Tribune news report, the Archaeological Survey of India (ASI) has summarily renamed the Shankaracharya Hill to Takht-e-Suleiman overlooking the Dal Lake in Srinagar.  If this was not enough, the ASI has also presented a distorted version of the history of the Shankaracharya Hill on the tourist information plaque, a move which has justifiably outraged the Kashmiri Pandits. From that news report:

“It is a matter of great concern that ASI has given the name Takht-e-Suleiman (Throne of Solomon) to it, replacing the earlier plaque. How have they come to this conclusion warrants an answer,” said Predhuman K Joseph Dhar, an expert on ancient Kashmir history. He said recently a European historian visited the place and expressed surprise over information provided to the people.

Of course, there is no question that this move is politically motivated because it has no basis in history.  One wonders what is the connection between Suleiman/Solmon and Adi Shankara.

Even a layman in India knows that Adi Shankara travelled in all four directions in India and established Mutts in prominent places in each direction. That apart, he consecrated several other major and minor temples and other places of worship like in Kanchipuram in Tamil Nadu, Kollur in Karnataka, and in Sharada in Pak-occupied Kashmir.

Kashmir indeed has a hoary history as one of the finest centres of learning in the world. In its heydays, it attracted scholars and philosophers from all parts of India. In the annals of the Hindu tradition, Kashmir was almost synonymous with “Sharada Desha” or “Sharada Peetha” or the Pedestal of Goddess Sharada (or Saraswati, the Goddess of Learning). A conclusive evidence of this exalted status of Kashmir can best be gleaned from the famous verse in praise of Saraswathi as

Namaste Sharada Devi Kashmirapuravasini||
I bow to you, Goddess Sharada,
the One who Resides in the Kashmira country||

This verse is so commonplace recited and heard by millions of Hindus daily across the world that hardly anybody gives a second thought at the rich historical heritage that’s embedded in it. And the credit for establishing Kashmir as the Sharada Peetha, to make it part of the nation’s cultural and spiritual DNA goes to Adi Shankara.

And it is this hoary heritage that the ASI has sought to destroy unceremoniously by renaming the Hill after some Suleiman based on a spurious history. Needless, in the process, real history has been made an unfortunate victim. From the same report,

“While the plaque informs the people that the roof of the temple was constructed by Mughal emperor Shah Jahan in 1644 AD, there is no mention of King Gopadhari, who constructed the temple, King Lalitaditya, who renovated it several hundred years before the arrival of Islam in the 13th century, and Dogra rulers, who placed the lingam of Lord Shiva, which was destroyed at the orders of Jehangir’s wife Noor Jehan,” said Dhar

As for the spurious history,

Talking about the name Takht-e-Suleiman, New York-based historian and author of “Jesus in Kashmir- The Lost Tomb’, Suzanne Olsson, said at one time Kashmir was controlled by Jews and Suleiman referred to Solomon, King of Israel and one of the greatest Jewish rulers, known for his wisdom and riches. “In ancient times, there was a considerable influence of Hebrew people in Kashmir. Several places have names similar to Jewish places. But historically, it is referred to as Shankaracharya Hill,” Olsson said.

One wonders whether Suzanne Olsson even understands how she contradicts her own assertion. If Jews had indeed controlled Kashmir, why don’t we have a single piece of evidence to show for it? And second, she doesn’t quite explain why despite the Jewish control, the Hill was revered and renowned as the Shankaracharya Hill? And why doesn’t Rajatarangini, the most definitive account of Kashmir’s history mention the presence–let alone control–of Jews even once? And why haven’t the galaxy of scholars and litterateurs from Kashmir–Kalhana, Abhinavagupta, Anandavardhana, Kshemendra, et al–mention Jewish influence? The truth is the Suzanne Olsson happens to be the latest purveyor of the phony theory that Jesus visited/lived in Kashmir. Two definitive sources are sufficient to puncture Suzanne Olsson’s motivated claim about Jesus in Kashmir. The first is by the redoubtable Koenraad Elst, and the second by a Buddhist monk and scholar named Shravasti Dhammika who takes a close look into various Suzanne Olssonsesque myths about Jesus’ visit and stay in India.

All kinds of scholars making all kinds of fantastic assertions have existed since time immemorial. However, it is regrettable that the ASI, a body of the Government of India, chose to put out one such fantastic claim as the official history of a place based purely on political consideration. This does disservice not just to Hindus but to the nation’s precious heritage as a whole. More importantly, it is a dangerous portent. As we’ve seen in the case of the St. Thomas Church of Mylapore how an existing Hindu place of worship was appropriated by Christian missionaries through deceit and declared as one of the sites of Christian piety.

Given this, what is the guarantee that the “Takht-e-Suleiman” will not become a dargah or mosque some time in the near or distant future and thereby erase another living place of Hindu heritage permanently?