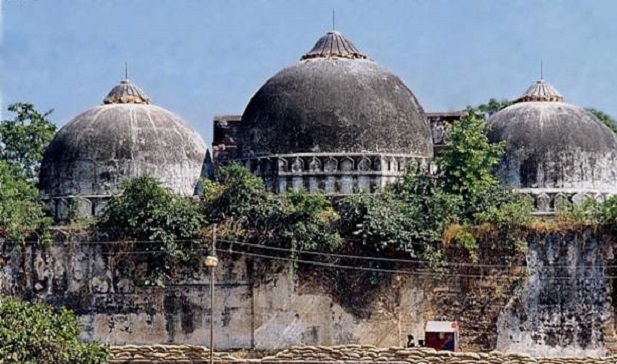 A recent news report mentioned that Hashim Ansari, the oldest litigant in the Ayodhya temple dispute, claimed that he would not pursue the matter any further, and even expressed his wish to meet Prime Minister Narendra Modi to resolve the issue.

Usually such news would be welcomed with joy but our eminent secularists are treating it with suspicion because it ends their opportunity to preach to the Indian society about the so-called dangers of ‘Hindutva’ as the parties involved in this dispute are willing to settle the matter by themselves.

The timing of Ansari’s withdrawal is significant since it happened just days before 6 December, which would have marked the twenty second anniversary of the day a large group of Hindu activists brought down the Babri Mosque which was built following the destruction of a Hindu temple in the sixteenth century.

The town of Ayodhya which is located in Uttar Pradesh captured national headlines in 1989-92 when Hindus and Muslims clashed over a structure which was claimed by the Muslims to be the Babri Masjid while the Hindus claimed that it was built after demolishing an existing Hindu temple.

The first time this news became sensational was when scores of Hindus laid the foundation stone of the prospective temple on 9 November 1989, which was the same day the Berlin Wall was torn down.

But this issue intensified in the following year when activists of the VHP along with many Hindu sadhus entered Ayodhya outfoxing the troops deployed by the then Chief Minister of Uttar Pradesh Mulayam Singh Yadav, only to be shot down within sight of the Babri Masjid. Many Hindus lost their lives.

However, the most astounding occasion that shook Ayodhya happened on 6 December 1992  when Hindus brought down the Babri Masjid and replaced it with a small makeshift temple in expectation of a grand temple.

According to Hindus, the site is the birthplace Rama one of the most sacred Gods of Hindus. A Hindu temple adorned this site until 1528 when Mughal forces led by Mir Baqi forcibly replaced it with a mosque.

[pullquote]Scores of Hindus laid the foundation stone of the prospective temple on 9 November 1989, which was the same day the Berlin Wall was torn down. [/pullquote]

A lot of scholarly research was undertaken to find the truth about this site, and the Government of India provided both the contending parties with an official forum in which specialists went through the evidence produced by both sides.  This debate took place around 1991, and once more before December 1992.  Though both rounds of debate were not very successful, they brought to light enough evidence to support a definite verdict.

Several secularists of the day then changed the goalpost stating that historical wrongs, even if well-proven, should not be allowed to determine present policies. This of course is the standard secular stand whenever grievances faced by the Hindu community are brought up.

Now the destruction of a temple in Ayodhya and its replacement with the mosque itself has been debated. To quote this extended extract from Koenraad Elst’s work Ayodhya :The Case Against the Temple:

The Hindu temple at the contentious site was devastated either by the armies of Mahmud of Ghaznin or the Delhi Sultans who captured the place and established here their provincial seat.  It is quite probable, and possible too, that a mosque was first raised during the Sultanate period (1001-1030; 1192-1526) on the site of the most important temple associated with the life of Rama, and Mir Baqi just restored that mosque during his occupation of Ayodhya. Sushil Srivastava likewise opines: Mir Baqi might have had the mosque renovated and then re-dedicated it to Babur…… According to anti-temple author Sushil Srivastava, the local Muslims believe that Emperor Babur came to Ayodhya in 1528 and destroyed the famous Ram Janmabhoomi temple, to propitiate Pir Fazal Abbas Musa Aashikan, an allegedly fanatical Muslim saint. Muslim claimants have only started challenging the established consensus about the iconoclastic origin of the Babri Masjid when secularist intellectuals taught them the tactical usefulness of that negationist position. Originally they accepted the true history, but differed with other people only in their theologico-juridical conclusions.  To them, a mosque is not less legitimate because it was built in forcible replacement of an idol temple, rather the contrary.  They claimed the Babri Masjid because at one point it was a mosque, and regardless of that mosque’s prehistory, they insist on the principle: once a mosque, always a mosque…..

This practice of being in denial of historical wrongs has been thrust upon the minds of the Indian Muslim populace by the agenda-driven Islamist leadership as well as by the secular claimants in the Indian media and academia. Unlike the Pope John Paul II who actually apologized to the indigenous South Americans as well as the Jewish population for the Vatican mandated inquisition, the Indian Muslim populace has been led to believe that any mention of medieval atrocities is an act of crass communalism.

Now many would pose the question why debate Ayodhya? For those of us who were born during the Ram Janmabhoomi agitation or post 6 December 1992, Indian politics in a way rested on three Ms: Mandir, Masjid and Mandal. The Mandir and Masjid issue of course were co-related and were the cause of massive communal riots from 1992 till mid-1993. Even the 2002 Gujarat riots which still lingers in memory started when the train carrying Hindu activists that is the Kar Sevaks was burned down by angry Muslim mob. Many media persons have even suggested that the present PM played a huge role in organizing the Ram Janmabhoomi movement in Gujarat back in 1990. So in a way the Ayodhya movement is both a starting and a turning point of modern Indian politics.

Also, a reason to look into the Ayodhya issue is how we view faith-related issues. What is Ram to the Hindus as well as the non-Hindus? According to VD Savarkar:

‘Some of us worship Ram as an incarnation, some admire him as a hero and a warrior, all love him as the most illustrious representative monarch of our race.’

[pullquote]The Indian Muslim populace has been led to believe that any mention of medieval atrocities is an act of crass communalism.[/pullquote]

As far as Muslims are concerned these lines from a poem penned by popular Urdu poet-philosopher Allama Iqbal could be of interest:

Brimful with the wine of truth is the cup of Indian thought,

Western thinkers feel enraptured when they drink this spiritual draught.

Thanks to the flights transcendent of the Indian mind,

This country has given birth to many men of angelic worth,

We have glorified this land with their deeds and thoughts.

Discerning minds respect his word as voice of God.

The Indian evening outshines the morning of other climes,

What a great miracle this beacon has wrought.

Rama was a warrior great, uniquely brave at heart,

A reservoir of love abounding, pure in word and thought.

(Now before any Islamist leader or secularist claim that quoting the national poet of Pakistan is paramount to doubting Indian Muslim’s patriotism, I must clarify that Iqbal is just as much popular with fans of Urdu poetry in India as he is in Pakistan regardless of religion.)

[pullquote]For those of us who were born during the Ram Janmabhoomi agitation or post 6 December 1992, Indian politics in a way rested on three Ms: Mandir, Masjid and Mandal. [/pullquote]

For many, Ram is a casteist-patriarchal authoritarian who is an anathema to a secular society. But in the early 1990’s the same Ram emerged as a force of unity for many Indians who were fed-up of the specious secularism handed out by the ruling dispensation.

The time has come for us to have a more nuanced view of Indian History and it can very well start by untying the Ram temple-Babri mosque tangle in Ayodhya. The historical wrong initiated by Mir Baqi needs to be corrected once and for all. Fortunately Hashim Ansari has proved that mutual trust can definitely bring an end to this contentious issue.

Agni and the Fire of Self-Inquiry