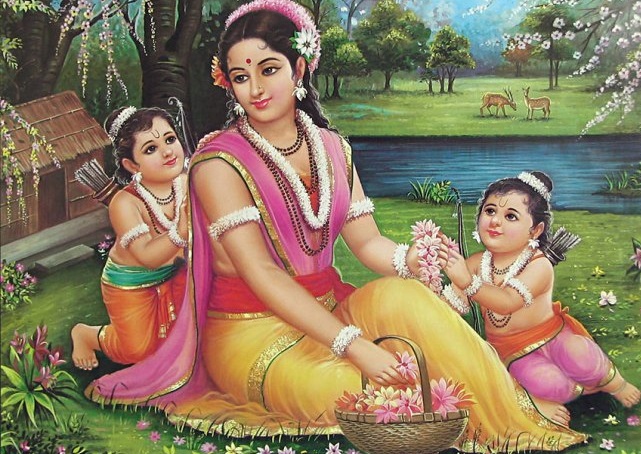 Even if, for the sake of argument, we do take into account the interpolation of the Uttara Kanda as part of the Ramayana, the story of Sita’s banishment cannot be read to be sexist or oppressive.  It is rather a tale of pathos, tragedy, and sympathy for the plight of both Sita and Rama.

Nowhere in the Ramayana do the main characters truly doubt Sita’s purity. What is being shown, however, is the fickleness of public perception, and the lesson being taught is the need to pay heed to the words and concerns of a king’s subjects, the duty to put the interests and desires of the subjects of one’s kingdom above the desires of the king and queen themselves. Lakshmana in many ways fills the role of everyman in the poem: his anger at the agni pariksha and banishment of Sita, his anger at Dasaratha for depriving Rama of his crown, his sense of despair when he must leave Sita at the forest, these are what we all feel upon reading the Ramayana.  This is indeed what the poet Valmiki intends us to feel.  The ability of Rama to, however, transcend these feelings, to put Dharma first, above his own heart and heartbreak—that is what makes him stand apart as the Maryada Puroshottam and what makes his reign forever hallowed as Rama Rajya.

Even in the worst moments of Uttara Kanda, the cruel, heartless Rama that others would have us believe hatefully cast away Sita simply does not exist.  There is a beautiful passage that describes the bliss shared by Sita and Rama during their time back in Ayodhya after Ravana was vanquished:

Rama and Sita would spend the second half of every day together in Rama’s Ashoka-grove, enjoying heavenly music and dance and partaking of gourmet food and intoxicating drinks.  It is said, ‘Taking in his hand the pure nectar of flowers as intoxicating as the Maireyaka wine, Rama…made Sita drink it, just as Indra does Sachi…Seated in the company of the celebrated Sita, [Rama] shone with splendour like Vasishta seated along with Arundhati.  Rama, steeped in joy like gods, afforded delight thus day after day to…Sita, who resembled a divine damsel.’ (Srimad Valmiki-Ramayana (With Sanskrit Text and English Translation), Gita Press, Gorakhpur (Sixth Edition 2001), Book 7, Canto 42, Verses 19 and 24 (Volume 2, p. 819))

It is at such a moment that one day Sita informs Rama that she is pregnant.  Delighted at this revelation, Rama asks her to name a desire of hers that he will immediately fulfil.  Sita responds, ‘O Raghava! I wish to visit the holy penance-groves and to stay, O Lord!, at the feet of sages…living on the banks of the Ganga … This is my greatest wish that I should stay even for one night in the penance-grove of those who live only on fruits and (edible) roots’ (Id., Verses 33-34, (Volume 2, p. 820).  Rama promises that she will be taken there for a visit the very next day.

Immediately afterwards, in the evening, Rama is informed by a spy of negative gossip surrounding Sita.  Rama is told that he is being rebuked by the people of Ayodhya as follows:  ‘Why does not Rama censure [Sita], who formerly had been forcibly carried away by Ravana? … Such conduct of our wives shall have to be suffered by us also, since whatever a king does, the subjects follow’ (Id., Canto 43, (Volume 2, p. 821).

When the gossip has been confirmed by others, Rama summons his brothers and tells them of the news.  He attests to his own certainty of Sita’s purity:  ‘To convince me Sita at that time entered the fire:  before you, O Lakshmana (son of Sumitra), Fire-god, the bearer of oblations to gods declared that Sita was free from sins, so also Vayu, who dwells in the sky, (so also) proclaimed the two—sun and moon, before the gods, Sita free from sins, before all the Rishis.  In Lanka, Sita, (Pure of conduct), has been handed over to me by Mahendra (the lord of gods), in the presence of the gods and the Gandharvas and my inner conscience bears testimony to her purity and nobility’ (Id., Canto 45, (Volume 2, p. 824).

However, it is the danger of infamy and the risk it poses to his ability to rule effectively that causes Rama to drive away Sita.  He tells his brothers, ‘O heroes among men, afraid of ill-report, I can even give up my life or all of you together, O bull among men, how much it is incumbent to leave Sita.  All of you see me submerged in the ocean of sorrow.  I do not see any greater misfortune than this’ (Id., Canto 45, Verses 13-16 (Volume 2, p. 825).

It is not doubt about Sita’s chastity that drives Rama towards this terrible deed but rather the dread realization that in order to safeguard his kingdom and his reputation among his subjects, he must go against what he knows to be true in the depths of his inner conscience.  The takeaway here is not that wives are easily discarded but rather the terrible price Dharma often exacts upon us, and more specifically, how beholden even the most powerful of kings are to the most humble of subjects.  It is after all in Rama Rajya that even a dog has a voice in court.  (Once, a dog appeared in Rama’s court to complain of being beaten by a man, and Rama duly gave the dog justice and punished the perpetrator).

One may also speculate that in accordance with the ancient principles of Garbhasamskar (prenatal education), Rama may have wanted to protect Sita from the distress of being surrounded by such poisonous rumours.  Stress and anxiety is not desirable during pregnancy, as every thought, feeling, emotion, action of the mother has tremendous impact on the child in the womb.  It may be that the ashram of Vasishtha was the best place for her during this part of Sita’s life and the best environment in which to raise Lava and Kusha to become the great heroes they grew up to be.

The Ramayana shows us that the king is beholden to the lowest of his subjects, even a crass, gossip-mongering person.  The cost of infamy, of earning a bad name before his subjects no matter how unfairly, is too dear to pay for a sovereign whose first duty must be to safeguard the interests of his kingdom and to preserve his reign.  A celebrated Sanskrit shloka proclaims, yatha bhumis tatha toyam, yatha bijam tathankurah / yatha deshas tatha bhasha, yatha raja tatha praja (As the land so the [ground] water; as the seed so the sprout; as the region [country] so the language; as the king so the people).  This is the entire theme of the Ramayana.  Rama must always hold himself to the highest standards, to be above reproach (even unfair reproach), to serve as the role model that the king is meant to be.

As  Sri Aurobindo advises in his writings on the Epics of India, while dealing with the human personality of Rama, one must take into account the  spirit  of his age and race:  ‘I  consider myself  under  an obligation to enter into the  spirit,  significance, atmosphere  of  the Mahabharata, Iliad, Ramayana and  identify  myself with  their  time-spirit before I can feel what their heroes  were  in themselves apart from the details of their outer action’ (Volume: 22-23-24 [SABCL] (Letters on Yoga), 419).  It is of utmost importance that we must have a thorough knowledge of the yugadharma of the age of Ramayana and interpret the events accordingly.  We create needless confusion and conflicts when we interpret ancient texts in the context of present times and present yugadharma.  When interpreted in light of the yugadharma of the age of the Ramayana, it is clear that every action of Rama was flawless and he followed the maryada of the yugadharma.

Indeed, Rama’s life is meant to exemplify that of Maryada Purushottom.  He is the best among men who scrupulously observed and honoured the relevant ethics, customs and mores of the society in which he lived.  He is the one worthy of emulating—an ideal son, an ideal husband, an ideal brother, an ideal king, an ideal protector of Dharma, an ideal friend, who placed Dharma and honour above all else.  In this, Rama is different from Krishna.  Rama is Maryada Purushottom, whereas Krishna is the Sampoorna Avatar who often had to break the strictures of Dharma in order to protect Dharma.  Both are Vishnu, but their roles are different.  It is said that to approach Krishna, one must first worship and follow Rama.  Only then is one qualified to worship Krishna.

This is the worldview of Dharma that underpins Hindu thought and literature.  It is in stark contrast to Western individualistic romanticism that valorises the story of King Edward VIII of England who abdicated the throne in order to marry Wallis Simpson, an American divorcee.  In Hindu Dharma, a kingdom is not a toy or privilege to be thrown away at whim.  The totality of a king’s life must be devoted to his kingdom above all else; that is his svadharma that he must perform at all costs.

My reading of the Valmiki Ramayana transformed my life.  I now turn to Rama for comfort, solace and peace, and always find it in his tender, compassionate gaze.  To know the love of Rama, simply chant the divinely powerful mantra, ‘Om Sri Ram, Jai Ram, Jai Jai Ram’.  This is one of the most powerful mantras, and the reason it is so often recited at the time of death is because of the ultimate peace it bestows upon the atman.

Do not just take my word for it.  Rediscover Rama on your own.  Dive into the ocean of the primary sources of the Ramayana.  It is a travesty that today the publication of our primary source texts and their authentic translations are languishing, while popular but unauthoritative interpretations or retellings are proliferating, leading to confusion and misperceptions of the truths of our shastras and Hindu tradition.  We must learn the Ramayana from the lips of Valmiki himself; the likes of Devdutt Pattanaik and Amish Tripathi cannot suffice or substitute.  We must go back to the source texts and traditions of Dharma to rediscover the glories of our Itihaasas and our deities.  With respect to Valmiki Ramayana, I would recommend the following as English sources (much better sources are available in Hindi and other vernacular languages; unfortunately, the choice in English is still rather limited): the Gita Press, Gorakhpur English translation of the unabridged text; the verse-by-verse translation provided on www.valmikiramayan.net; Kamala Subramaniam’s English translation (which although abridged is quite comprehensive) of the text; and Lectures on the Ramayana by V.S. Srinivasa Sastri.