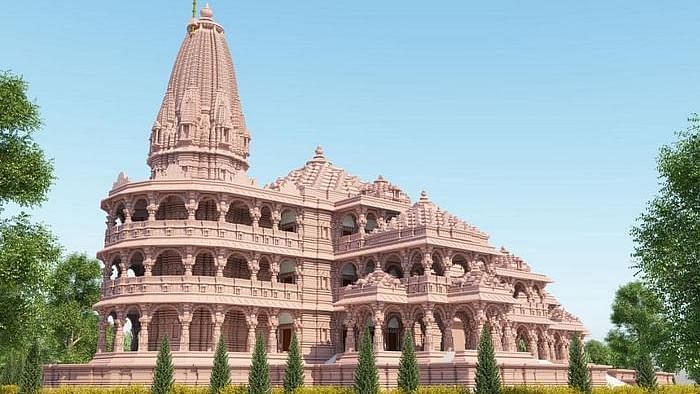 Shyam Saran, former foreign secretary Government of India criticizes Prime Minister Modi for attending the Ayodhya event in his recent article. As a Nehru Dynasty loyalist, his opposition to the Ram Temple is understandable. But in so doing, he not only toes the Pakistan government line but also has no qualms in unabashed concealment of truth.

In his speech, Modi referred to the popularity of Ramayana, among others, in Indonesia, a Muslim majority country.  Saran notes ‘’ The irony was perhaps lost on him that it was on the site of the criminal demolition of a mosque that a temple to celebrate Ram was being built’’. He hides the fact that the mosque was built by Babar, (a Uzbec invader), in 1528, over a Temple that existed at the site. The Supreme Court accepted the archeological evidence – and delivered a unanimous verdict in favor of the Ram Temple Trust. Notably, of the five Supreme Court judges, one was a Muslim. But in Saran’s idea of India, it seems, the rule of law has no place.

Saran writes ‘’the continued popularity of Ramayana in distant lands is a testimony to the universal moral appeal of Indian epics’’. But does not tell why Ramayana appeals to Indonesian Muslims but not to Indian Muslims. It could have avoided the bitter legal battle and created harmony. Is it because Indian Muslims consider the Ramayana and Mahabharata as Hindu epics and not Indian epics?  If they identified themselves with Indian cultural heritage they would not rejoice destruction by foreign invaders in Ayodhya and other places. Would they?

Given the universal appeal of Ram, at least, Saran could have persuaded the Congress Party governments not to question the very existence of Ram in the Supreme Court. Was his diplomatic silence triggered by a personal ambition to become a foreign secretary? Or did he find that receiving Padma Bhushan honor was more appealing than Ram’s universal appeal? He could have at least convinced his foreign ministry colleagues like Hamid Ansari (former Vice President of India) or bosses like Salman Khurshid (former Foreign Minister) to learn from Indonesian Muslims?

Saran is at his diplomatic best when instead of openly opposing Ram Temple, he considers ‘’to trap Ram in a golden and glittering edifice is to shrink his universal appeal as a moral hero— a Maryada Mahapurusha— to a local deity…..’’. But does not tell us why similar logic could not be applied to holy places of other religions – the Vatican or the Macca – for example? Or does he consider that the message of these faiths does not have a universal appeal of morality, is inferior to that of Rama’s message, and hence grand edifice suits only to these faiths? Also notice, he uses the word ‘’Mahapurusha’’ though Hindus use the word purushottama. Does he not know the difference between these words?

Saran considers that Modi is unaware of the universal spiritual message of Ram! But Saran fails to grasp that given Ram’s universal appeal, hordes of foreign and domestic tourists would get attracted to Ayodhya and transform the Purvanchal economy. Probably, thinking of foreign service officers never goes beyond dinner etiquettes. They were never trained to think business-like. The Congress party also lacked Modi’s vision and was content in clinging to power by continuing the British game – unite Muslims by appeasement policies and divide Hindus.

Saran was surprised that an Indonesian Muslim artist prayed Hanuman before an episode of Ramayana play. The answer is simple.  Indonesia did not follow the Nehruvian education system. Indian school textbooks distort history and contain an elaborate description of Moghul invaders but scantily mentions about Hindu kingdoms like Vikramaditya, Vijayanagara, Chola, Pandyan or the heroism of Shivaji, Bajirao, Rana Pratap, Suheldev or the Rani of Jhansi. Why?  The education system has been controlled since Independence by Marxists who distorted Indian history.

The British planted in the Muslim psyche the idea that they do not share a common culture with the Hindus (Sarila 2009). It was Nehru’s job to erase that and emphasize that the cultural heritage of all Indians was common though their ways of worship could be different.  By not cultivating such respect among all Indians for our cultural heritage, didn’t the Nehru dynasty play a diabolical game to remain in power?

As the Indonesian Muslims were not exposed to the toxic Nehruvian history, they do not have issues in showing reverence to Hanuman and accepting their Hindu ancestry which Indian Muslims have.

To extricate himself he resorts to a diplomatic somersault and becomes paternalistic. ‘’What we in India fail to appreciate is that the awareness of a higher spirituality, the humanistic spirit embedded in the delightful stories of our epics seems better understood and celebrated in these distant lands than our own’’. Was it not the job of the Nehru dynasty to create that spirit? Why Ramayana was not made mandatory reading in schools including in the Madrasas and Convent schools? Did Saran not provide appropriate advice from his diplomatic experience? Why do bureaucrats get brilliant ideas on how India should be run only after they retire?

Saran continues his paternalistic attitude. ‘’ It is not by confining Ram to the narrow rituals of religious faith that we should celebrate the universal appeal of India’s spiritual and cultural legacy but by learning about its immeasurable and intangible value…..’’.  How could Indians learn about the cultural legacy unless the learning is grounded in the educational system? How could Indians draw inspiration from its cultural heritage when the Marxist education system drilled down the message that we should be ashamed of our heritage as though the caste system is our only heritage. Given this, the need for a temple – a place where people congregate to connect with their cultural past forgetting caste differences – is felt all the more. Yet Saran opposes the Temple!

Saran thinks that by comparing the Temple movement to the Independence movement Modi has demeaned both. Saran contends that Modi is right that Rama resides in the heart of Bhaktas but Saran then shows his anti-Mandir fangs by asking why does then Rama needs a manmade temple to reside. Well, for the same reason why the God of other faiths needs a Church or a Mosque. Extending the same logic, one could ask: why do we need, for example, Nehru statues, or the 52.6 acres of Shanti Vana at a prime location in New Delhi? Aren’t Nehruvians demeaning his legacy? Does he not reside in their hearts?

Saran asserts that we do not need a Temple, as India has multiple legacies. But the multiple legacies could seamlessly connect given Ramayana’s universal appeal that he extols earlier. Under the flag of Rama, such a fusion could be easily achieved. Why not Saran undertake this as a retirement project and educate people of diverse legacies about Rama as the best ideal?

Saran makes us laugh when he notes that the Independence movement bound ‘’us together in a shared sense of citizenship. If it was so, could the former diplomat explain why did the shared spirit fritter away as freedom was on the anvil? Did Nehru fail Indians? But Saran avoids difficult questions.

Saran then asserts ‘’Gandhi’s Ram Rajya was an embodiment of this idea of India. A Ram Rajya which needs a glorious Ram Temple as its symbol is a very limiting conception of India’’.

Gandhi’s Ram Rajya has four elements: (a) true democracy, equal rights (b) Independence, moral authority (c) no coercion, and (d) respect for others. ‘’The first requisite is self-introspection’’.  How Nehru and his dynasty failed on all these counts has been well summarized, among others, by former bureaucrats Sarila (2009)[1], Godbole (2014)[2], and researchers Jeffery (2008) and Sen (2013).

Instead of an intellectual debate, Saran resorts to mud-slinging. He describes the struggle for Ayodhya ‘’a violent and vulgar brawl’’ and ‘’ugly manifestations’’.

Saran could have a reason to feel dejected as his colleague Jai Shankar is now the Foreign Minister while Saran had to be content with foreign secretary position and receiving a civilian award.

But under Modi, merit alone counts not dynasty loyalties.

To be true to his name, Saran could have surrendered to Krishna – and his universal appeal – given that Indonesia proudly showcases the Arjuna Vijaya chariot statue. But alas, Saran chose to surrender reason at the feet of Nehru dynasty.