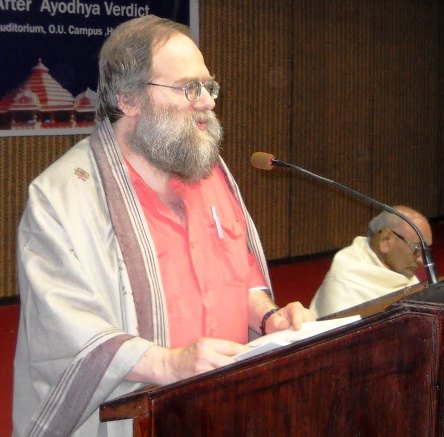 We step into the 22nd year of the Babri Masjid demolition, an event that changed the course of Indian politics definitively. Yet, for an event of this magnitude, still so fresh in recent memory, we still notice that it rarely if ever finds a balanced mention in the public narrative.

And so IndiaFacts got talking to Koenraad Elst, the Belgian scholar and an acknowledged expert on the Ram Janmabhoomi-Babri Masjid episode. He is someone who not only studied the issue but lived through those turbulent times.

1. It has been nearly 22 years since the Babri Masjid has been demolished, and the issue has all but been forgotten. As one of the experts on the issue, what do you think has happened? Have the Hindus lost that zest that characterized the Ram Janmabhoomi movement?

Koenraad Elst (KE): Firstly, the Hindu masses have seen that even their leaders who led this movement have practically abandoned the issue. And those who are committed to the temple, have channeled it through official procedures that don’t requie participation of the masses.

Secondly, it is a fact that the rise in consumerism and rampant westernization have made the Hindus less Hindu, less passionate about Rama. Christian schoolmasters have this as their explicit goal: Hindu pupils are not forcibly converted to Christianity, but are taught to get estranged from and indifferent to Hinduism, to look as outsiders upon it. The same strategy is, consciously or de facto, followed by the present media, the educational and the cultural sector: to estrange the Hindus from Hinduism by feeding them Sufi music, Christian concepts of religion and general westernization. In Mumbai films, Hindu priests are subtly but systematically slandered or ridiculed to familiarize the Hindu audience with the idea that there is nothing venerable about Hinduism.

2. If a new Government comes to power in 2014–headed by whichever party–do you think it would have the political will to rebuild the temple? If yes, and if the temple indeed begins to get built, do you foresee riots and/or violence akin to the ones witnessed in the 1990s?

KE: That Ayodhya is a far less important issue than in 1992, makes the atmosphere more conducive to a peaceful settlement. It is less prominent in the media thanks to the fact that the dominant intelligentsia have suffered a judicial defeat, so they are more muted. So, normally the days of the Ayodhya riots should be over. The Court verdict of 2010, though disappointing for the Muslim side, already caused no riots.

3. From a historical perspective, it was relatively easy for Sardar Patel to rebuild the Somanath temple. Why did Ayodhya become such a huge problem?

KE: Because the secular intelligentsia felt so self-confident that they could blow this issue out of all proportion. They could reasonably have taken the position that a temple was indeed demolished to make way for a mosque but that we should let bygones be bygones. Instead, they went out of their way to deny facts of history. Rajiv Gandhi thought he could settle this dispute with some Congressite horse-trading: give the Hindus their toy in Ayodhya and the Muslims some other goodies, that will keep everyone happy. But this solution became unfeasible when many academics construed this contention as a holy war for a front line symbol of secularism. Now that the evidence and the judicial decision have put them in the wrong, they are not so loud anymore.

4. Hypothetically, had the Ayodhya movement occurred in today’s milieu, would it garner a similar kind of fervour?

KE: Two things have changed: the Hindu masses don’t care as much about Ram, and the artificially created doubt about the history of the site has been cleared by the excavations and the verdict of the Allahabad High Court. It should never have caused such fervor or even a controversy in the first place. After all, it is a Hindu sacred site, Hindus go on pilgrimage there but not Muslims, and functionally the mosque already was a temple. Any sensible person would have awarded the site to the Hindus without further ado. Instead, the secular intellectuals raised the issue of history, falsely alleging that it was not what people had always thought. It is not just that they were wrong on the history, it is also that this wasn’t an issue of history in the first place. The site is venerated as Ram’s birthplace, and therefore deserves protection by a state that calls itself secular, not because something happened there hundreds of years ago, but because this belief is alive right now.

5. Has the BJP and/or Sangh Parivar all but abandoned the Ram temple issue? This question is not from an election issue perspective, but from the perspective of a party which claims to speak for, and is seen as perhaps the only hope for Hindu-related causes and issues.

KE: The BJP had already abandoned the issue after reaping the electoral harvest in the 1991 elections. From then on they treated it as a hot potato and preferred the Courts to handle it. That is why LK Advani was in such distress when he witnessed the demolition of the temple/mosque: he was there to show that the BJP could master the Hindu emotions about Ayodhya and make the masses toe the line scripted by the elite. He didn’t expect this much of Hindu activism and certainly didn’t side with it. Today, the broader Hindu movement, not just the Sangh, feels confident that it will henceforth have its way on Ayodhya through official channels.

6. Political parties apart, has there been a gradual build up of a sort of apathy even among large sections of the Hindu society towards the Ram temple rebuilding?

KE: Yes. But that apathy has also developed inside the “militant” Hindu movement. The logical consequence of the Ayodhya agitation would have been a systematic look at the history of Muslim-Hindu hostility, but in reality nothing of the sort has happened. In the 1990s a few retired historians were working on Muslim history, chiefly Harsh Narain, KS Lal and of course SR Goel, but that school is long dead, and nothing has replaced it, except maybe the Shivaji museum in Pune. The Sangh has simply given this issue away to the secularists, who have filled the textbooks with their version of history, downplaying Islamic destruction and generalizing Islam’s intolerance to all religions including Hinduism.

In the very long run, of course, truth will be restored. If you can learn anything at all from history, it is that everything changes. So, the present power equation, which has made these distortions possible, won’t endure forever. It is a foregone conclusion that one day, the negative role of the secularist historians will be seen for what it was. Western Indologists who chose to toe the secularist line, even against their own research findings, will not look good either. But that will only happen after they are safely dead, after enjoying a life of prestige and positions. For there is no one in sight who could threaten them, certainly not the Hindu movement.

7. You had in an earlier interview mentioned about the moderate Muslims (for e.g. Ali Asghar Engineer) who were willing to come to a reasonable settlement. Given how aggressive Islamism has crept into India over these two decades–for e.g. the Owaisis–would you reconsider this position?

KE: Frankly, I know little about the internal trends in the Muslim community. I have the impression that they are investing their energy in more important concerns than this purely symbolic issue. They may have understood that the Muslim stand was unreasonable: it is a Hindu site, of great significance to Hinduism and not to Islam, so insisting on re-Islamizing a Hindu sacred site wouldn’t win them friendship or goodwill. But if they care less about Ayodhya, it means they care more about issues involving tangible power and privileges, such as reservations for Muslims.

8. You were someone who mounted a scholarly & bold opposition to secularist historians during the Ayodhya evidence phase. However, as we notice, the same breed of historians have returned to the academia and we observe the same distortions in school and college textbooks. And this despite Arun Shourie’s expose. What happened? Is it merely that the political equations returned to status quo after 2004?

KE: Nothing happened, that is precisely the problem. Against the great offensive by secularist historians to whitewash Islamic rule and to deny that the mosque was built on a Hindu site, the Hindu movement did nothing at all. There were some private Hindu historians, all long dead now, but they were given no organized support. That the BJP seems set to win the general elections gives little hope: they already were in power in 1998-2004 and did nothing to implement any part of their Hindu agenda, though they did provide good governance on the economic front. The one thing they did try, viz. to change the history textbooks, was a horror show of incompetence.

But maybe Narendra Modi will prove different. He has been denounced systematically for over ten years by the secularists and slandered no end in the media, to the extent that the US has denied him a visa. Usually this sort of hounding by the secularists leads a Hindu to take extra secularist positions, but in this case Modi might really remember just how vicious the secularists can be. Perhaps he will do something really Hindu for once. Only time will tell.

9. In the end, do Hindus really have any hope at all to see the Ram temple getting built?

KE: The more marginal the temple becomes, the better its chances of being built. This shrill controversy wasn’t very Indian anyway.  Better to work discreetly and achieve your goal, than this banging your head against the wall.