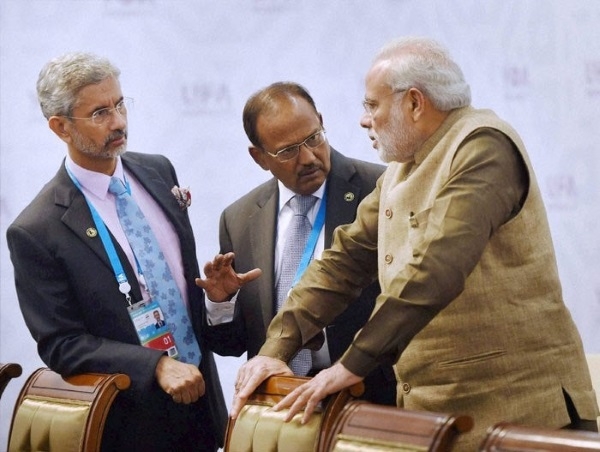 The recent Ramnath Goenka lecture by External Affairs Minister, Dr. S. Jaishankar was a model of depth, nuance and sophistication. It contained everything I would have wished to propose myself as an international relations scholar! Indeed, I was gratified he identified two critical issues that I have dwelt on too, the need for searching reappraisal of the policy errors that led to the 1962 Indo-China war and defeat for India. And he also affirmed the vital strategic significance of PoK, which converges with my argument that the line of control cannot and should not be accepted, under any circumstance, as the international border as many, who should know better, are ignorantly suggesting.

The one additional issue that the EAM might have specifically addressed, though he is surely aware of it, is the domestic backdrop for successful foreign policymaking and implementation. In this context, the significance of the Ayodhya verdict might be highlighted to illustrate this broader point about the domestic backdrop to foreign policymaking. Ayodhya may indeed be the turning point in India’s domestic awakening and the stalled process of nation building following the passing away of Sardar Vallabhai Patel in 1950, after which the narrow compass of immediate interests dominated Indian politics rather than statesmanship and farsightedness. And two major errors of foreign policy are examined in some detail in the exegesis below as well to supplement Dr. Jaishankar’s searching review of principles and modalities of foreign policy making.

One should not imagine Ayodhya is a purely ‘religious’ issue that has now been permanently resolved. Its domestic consequences will be affected by India’s regional and international adversaries. Virtually all of one truculent adversary’s intellectual effort is devoted to the study of India and how to use that understanding to its advantage. They will surely worry how the building of Ram Mandir will unite and mobilise Indians as a people. India’s adversaries will undoubtedly redouble their efforts to in order deepen India’s existing internal fissures to undermine its self-confidence and unity.[1]  It is surely clear that this psychology of a sense of national purpose is also highly political and Ayodhya is an extraordinarily significant historic event in that light. Such a famous victory for the majority of Indians empowers the nation to undertake difficult tasks and reinforce its resolve in international engagements. It even helps to propel difficult economic goals that require the kind of sacrifices a united nation is more capable of contemplating.

This is when the nation’s adversaries activate their assets within India to create division and self-doubt. Acts of terror will definitely occur to instill fear and question the wisdom of building a Ram Mandir, especially in the minds of those who prefer a quiet life to high principle. Islamic Militant organizations will try to persuade some Indian Muslims that they must now engage in Jihad to defend an ‘Islam in danger’, an old war cry that always motivates enraged action. And foreign-funded media outlets will be ready at hand to incite and reinforce disaffection. This is how they promoted Islamic terror after 1992 and 2002, by inciting Muslims to act and every terrorist cited Ayodhya and the Gujarat riots as reasons for wanting to kill Hindus.

A number of anti-national Internet portals constantly question India’s national purpose by deviously espousing ideas of unfettered liberty and freedom that are impossible goals for a polity striving to invent itself as viable nation, while adversaries seek to derail it. These Internet portals are cynically funded by wealthy IT companies whose owners regularly purvey bogus self-serving advice to Indians on all matters. In reality, these companies are dependent on the US market and donate to anti Hindu portals at the behest of US-based evangelical organizations, who can persuade the US Government to manipulate US H-1B visa quotas required by their employees Without these they cannot operate as businesses in the US market. Hence their treacherous donations as well to major US universities that reconnoiter India to facilitate US foreign policy goals, one of which is to Christianize a major part of India’s Hindu population.

The errors and missteps in policy which the esteemed Dr. Jaishankar highlighted were of fateful significance for the destiny of India. These can be laid at the door of Jawaharlal Nehru and his favoured advisers. The greatest historic geopolitical setback India suffered was to be outwitted by Britain and Pakistan because Nehru was being influenced by the cunning Mountbattens and Lady Edwina Mountbatten, who was a honeytrap deployed to beguile the self-confident, but naïve Jawaharlal Nehru. The first stage of the calamity was the failure to intervene decisively after Gilgit-Baltistan’s seizure on behalf of Pakistan by the British officer on the ground. Major William Brown administered a coup within five days of the province’s accession on 26th October 1947, taking Maharajah Hari Singh’s representatives into custody. This was clearly a move that had been planned in advance in London and absolutely needed to be reversed at any cost.

The second misjudgment, in which Lady Edwina Mountbatten also evidently played a role, was Nehru’s misadventure in appealing to the UN about Pakistani invasion instead of using armed force to expel the Pakistani marauders completely from the entire region. Such extensive armed action would have undoubtedly entailed major political and military challenges, but land access to Afghanistan was of such huge geopolitical importance to India that military action ought to have absolutely been undertaken. Instead Nehru allowed Pakistan to retain control of PoK while he recklessly proceeded to eject Maharajah Hari Singh and replace him with the double-dealing Sheikh Abdullah as the exclusive ruler of J&K. Evidently, his private whims and Edwina’s fancy overruled statesmanship. The Maharajahs’ Prime Minister, Ramachandra Kak, was dragged through the streets with a rope around his waist, recalling the fate of Prince Dara Shikoh.

The other massive error of judgement of the incorrigibly self-confident and utterly naïve Nehru was in the run up to India’s shameful rout during the disastrous military encounter in 1962 with China. A shockingly ill-equipped and poorly-led army was sacrificed in the icy wastelands of the Himalayan foothills by Jawaharlal Nehru and his pernicious Defence Minister, Krishna Menon that should have led to charges of treason against both. It might be noted in passing that the capricious misjudgment of the ever-eccentric, Morarji Desai, Nehru’s Finance Minister from March 1958, had led to the inadequate funding of India’s armed forces, in the prelude to the border war with China.

Nehru’s weakness for foreign-educated poseurs was a major reason for the catastrophic mistakes over China. It is a mystery why his advisers could not infer from careful scrutiny of published documents and intelligence appraisal that a Sino-Soviet fissure had occurred and the Soviets could no longer restrain Chinese belligerence towards India. He apparently had blind faith in his ambassador to China, the pompous obfuscator, K. N. Panikkar, whose conduct Sardar Patel once denounced as verging on treason. Nehru also relied on Sarvepali Gopal to examine the archives on London on the Indo-China border issue, negotiated in the Simla Accord of 1913 that had led to the establishment of the disputed McMahon Line. But Nehru’s biographer missed the most vital document on China’s repudiation of the agreement during his archival search and proceeded to misinform Nehru, reassuring him that India’s claims over the Indo-China border, the McMahon Line were absolutely solid.

It was tragic that Nehru rejected the advice of Sumol Sinha, the MEA’s leading China expert, an astute observer of China, where he had spent time and was fluent in Mandarin. He had predicted China’s invasion of Tibet in 1950, the armed clashes with India of 1959 and warned of likely further military action against India, but Nehru dismissed his concerns and banished him to a course at Harvard, telling him he didn’t understand foreign affairs! Mr. Sinha was recalled immediately after the disastrous military setback in 1962 and Nehru then decreed all documents on China would henceforward require his countersignature. But it was too late. The prophetic warning of B. R. Ambedkar in 1954, in the Rajya Sabha, about the Chinese conquest of Tibet in 1950 had come back to haunt India: “By allowing the Chinese to take possession of Lhasa, the Prime Minister has practically helped them bring their border down to the Indian border… Aggression might well be committed by people who are always in the habit of committing aggression.” In addition to the issues so ably outlined by External Affairs Minister, Dr. Jaishankar, India’s foreign policy posture and the ability to achieve goals depend on the determination and support of its people. The likely nation-building impact of the repossession of Ayodhya is likely to arouse a much greater sense of the Indian self and endorsement of policies and sacrifices necessary to achieve them. India’s adversaries will be waging an ideological war through the foreign media and its Indian surrogates to instill self-doubt as well as instigating terrorism to deter Indian self-assertion, after a millennium of quiescence. Ayodhya is also connected to the liberation of Kashmir by Modi Sarkar and compounds the dilemmas and anxieties of hostile foreign powers who fear a self-confident and empowered India. It will add to their determination to fish for trouble and India is a land of countless traitors who collaborate with those who seek to destroy it.