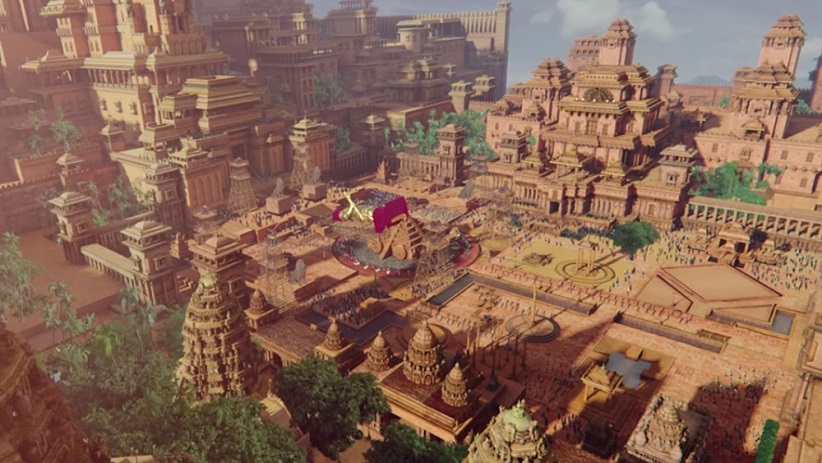 People who have watched the Bahubali movie are mesmerized by the grandeur depicted in every scene. The design of Mahishmati is out of the world and is beyond anything that we see around us and can imagine. It surpasses the beauty of any aesthetically designed building that we commonly see in the cities. The palaces shown are of exquisite beauty and properly guarded with a lot of secret chambers. One cannot ignore the inspiration from the Indian Ithihasa and Purana that Bahubali draws from, be it the rituals, war strategies or attire. Though it is difficult to capture all the dimensions of ancient life in a movie, the attempt has been significant. It would be interesting and relevant, at this point, to understand the design of cities, governance structures and security measures as described in our Ithihasa and Purana.

Ayodhya in the Ramayana

The Balakanda of Ramayana describes Ayodhya in great detail. Ayodhya, which literally means “unassailable”, was about 12 yojanas in length and 3 yojanas in breadth. A yojana is roughly 8-9 miles and this would mean that Ayodhya was about 9000 square kilometers. The largest cities in the world, Tokyo and New Delhi, which are about 2200 and 1500 square kilometers respectively, would pale in comparison to Ayodhya in size as described in the Ramayana. The city is described as being adorned by Skyscrapers with no unconstructed space. Densely populated, Ayodhya was home to best in-class talent in dance, music, poetry and science. With zero unemployment, the city provided the eco-system for every profession to thrive. Protected by moats on all sides, the city was impossible to be entered by trespassers or traders without paying dues. The processes described are comparable to various border protection mechanisms that we adopt today. Entry and stay permits were provided only to those deserving and concerned with specific trade with the region. Several villages surrounded the main city. Two types of villages: Grama and Ghosha are mentioned in the Ramayana. The officials taking care of these units were called Ghosh mahattar and Gram mahattar respectively.

In today’s context, there is a lot of talk about Urban resilience, which refers to the ability of the city to bounce back to its normal state during times of disasters or calamities: ecological, economic or social. It is described in the Ramayana, how Ayodhya was designed to be resilient from natural calamities (Adi Deivika) and social problems (Adi Bhautika).

Throughout the Mahabharata, there are mentions of various types of settlements. Goshas that were cattle farms near the forests where the cowherd communities lived; Palli, which were hamlets; forts surrounding the cities called Durga; villages around the fort called Grama; fortified cities called Nagara; and towns called Kharvata. The village was the basic unit of administration and were organized and governed based on various guidelines.

In the Mahabharata, Dhritarashtra granted the Khandava prastha to the Pandavas as a magnanimous gesture. In reality, Khandavaprastha was a forest area. Shri Krishna helped them to clear the forest, rejuvenate the land and build Indraprastha. The descriptions of Indraprastha are quite fascinating. The city was protected by a huge trench which was filled with water comparable to the sea. Huge walls were erected fortifying the entire city. Palatial mansions, which had every kind of weapon, adorned the city. The roads were so wide that accidents were impossible. Outside the city were numerous gardens, which were decked with flower and fruit bearing plants some of which were: Amras (mango trees) and Amaratakas, and Kadamvas and Asokas, and Champakas; and Punnagas and Nagas and Lakuchas and Panasas; and Salas and Talas (palm trees) and Tamalas and Vakulas, and Ketakas. Adding to the beauty of the flora were the diverse fauna. These descriptions show the importance that was given to biodiversity.

The description of the palace that Maya asura built for the Pandavas is in the Sabha Parva. Maya was saved during the burning of the Khandava vana and in return he offered to build the most beautiful palace for Yudhisthira and his brothers. The palace is described as having wide pathways adorned with pictures of various kind. 8000 rakshasas were guarding the palace. One can imagine the size of the palace if 8000 people were in its corridors. The palace had a huge tank that was filled with aquatic plants and animals. It is said that Maya took just 14 months to build this palace. In today’s times, it takes at least 1.5 years to complete a single-block of multi-storey apartment.

In the Shanti Parva, when Yudhishthira seeks Bhishma’s guidance on building the right kind of city, Bhishma goes into great detail on the various aspects of what we call today as urban security planning.

Six types of citadels should protect the city where the king dwells namely: water-citadels, earth-citadels, hill-citadels, human-citadels, mud-citadels, and forest-citadels. The main area should be protected with impenetrable walls. Large squares should be created where shops can be set up. The supply of rice and other  supplies like fuel, iron, chaff, charcoal, timber, horns, bones, bamboos, marrow, oils and ghee, fat, honey, medicines, flax, resinous exudations, weapons, shafts, leather catgut (for bow-strings), caries, and strings and cords made of munja grass and other plants and creepers should always be stocked for emergency situations. A number of tanks, containing large amount of water, have to be built. This indicated a flourishing irrigation system.

Every village or Grama should have a headman. For every 10 headmen, there will be a superintendent who took care of 10 villages grouped together as das-gramini. For every 2 superintendents, there would an officer who took care of 20 villages-vimsatipa. The person above the officer will manage a hundred villages (sat-gramini) and above this is the one who manages thousand villages. This person manages a town and every town has an officer who handles the daily affairs and protection during war. Bottom up support is offered in this organizational structure. The designated officers had to maintain account of all the income and expenditure and personalized taxation systems were designed. If we have to compare it with the scales of today, the whole of Tamil Nadu has only a little over 200 taluks. So the scales spoken of in the Mahabharata are magnificent.

So what was the duty of these top officials?

Bhishma elucidates the various duties performed by the officials:

These complex organizational structures require meticulous planning and execution. This also requires knowledge of ecology, architecture, precision science, labor laws, economics and weapons engineering. Deep research combined with imagination will be required to grasp the immensity of what is described in Mahabharata and Ramayana.

Dwaraka is described both in Mahabharata and Srimad Bhagavatam. It was known by the name Kusasthali in the Mahabharata. Dwaraka is said to have nearly 9 lakh palaces. Like the description of many ancient cities, Dwaraka too is described to have well laid out roads, parks, gardens and flowering trees and plants. There were zones demarcated for commercial activity and residential areas. The Mahabharata describes the security measures put in place to protect it from the attack of the Salwas thus: “the city was well protected with pennons, and arches, and combatants, and walls and turrets, and engines, and miners, and streets barricaded with spiked wood-works and towers and edifices with gate-ways well-filled with provisions, and engines for hurling burning brands and fires, and vessels, of deer-skins (for carrying water), and trumpets, tabors, and drums, lances and forks, and Sataghnis, and plough-shares, rockets, balls of stone and battle-axes and other weapons and shield embossed with iron, and engines for hurling balls and bullets and hot liquids”. As a preparation for attacks “And the police soon drove out of the city all mimes and dancers and singers of the Anartta country. And all the bridges over rivers were destroyed, and boats forbidden to ply, and the trenches (around the city) were spiked with poles at the bottom. And the land around the city for full two miles was rendered uneven, and holes and pits were dug thereon, and combustibles were secreted below the surface. Forts were naturally strong and always well-defended and filled with all kinds of weapons!”

Often we assume that the current generation is far more advanced than those in ancient times. Ancient people are described as being barbaric, living in caves and eating raw meat. The descriptions of ancient cities in the Ithihasa reveal an important thing about the past- that ancient civilizations had a superior sense of architecture, science, arts and aesthetics. Current excavations and discoveries are definitely pointing in that direction and movies like Bahubali help to bring back to life the grandeur of ancient times.