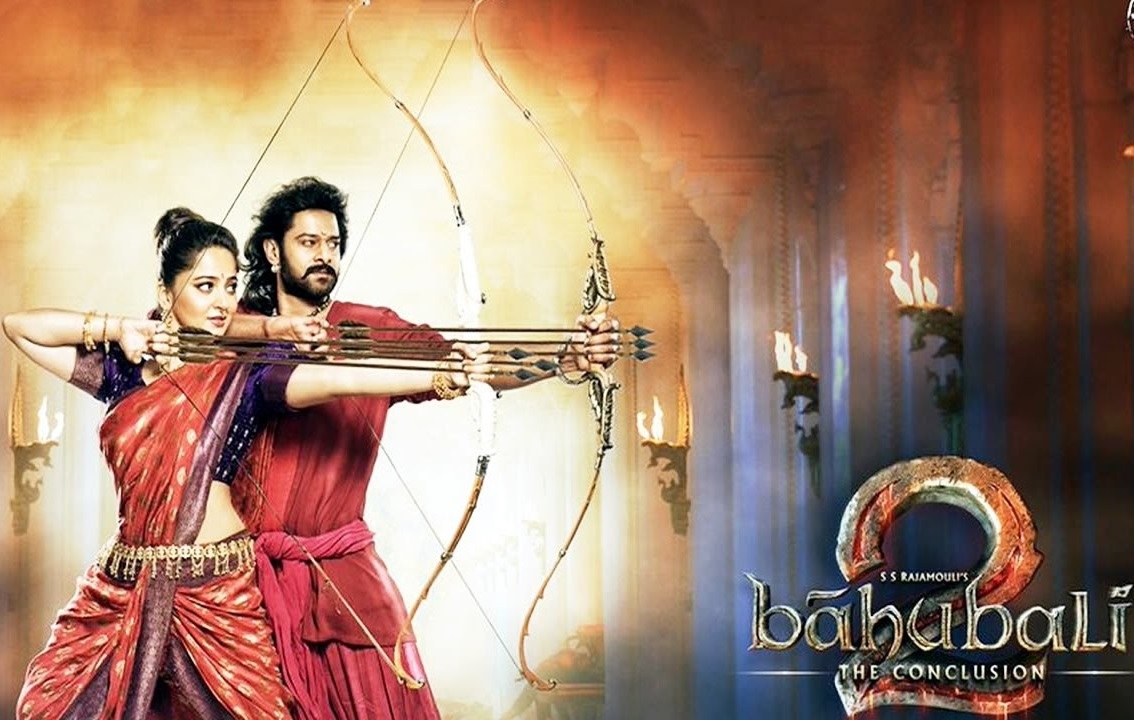 Last few days, cinema lovers have been reading Bahubali 2 movie reviews one after the other. There are few other reasons listed, but most reviews are about this: Bahubali fan reviews are about unapologetic and fantastic portrayal of Hindu rajyam, and those who did not like Bahubali have reviewed Bahubali 2 negatively due to the portrayal of ‘only’ Hindu rajyam. These are only subjective reviews, and none of the reviews go beyond the external technical and superficial “-ism” based analysis. This is also how movie reviews are done routinely. The need to question this style of movie analysis arises from one of the boisterous, biased and self-righteous claim where Bahubali is called not “sensible cinema”.

A drama can be analyzed on the basis of its socio-political impact and its aesthetic appeal. I would like to bring in Natyashastra and discuss concepts that should at least be used by Indians while analyzing Bahubali or any other natya for that matter, because Natyashastra is an Indian vidya.

A classic piece of art as defined by Natyashastra, needs to be Sanatana, should be Sarvavarnikam (for all varnas). Art should promote the four purusharthas – dharma, artha, kama, moksha. Arts are not for short term enjoyment, they for Indics, form essential part of living. Arts must be elevating as they have to be pursued manasa, vacha, karmana. As one of the foremost theatre theorist Dr. Bharat Gupt puts it: “Natya creates an elevated knowledge of the universe, over and above the ideas and philosophies which are temporal, and while doing so it provides a highly elevated experience called rasaanubhuuti. Rasa not FOE is the aim of Natya.” Thus the purpose of natya, or any other art is much more than what couple of ‘-isms’ dictate. This is not to say creativity be stifled. It is only to underline that arts is serious business and there are guidelines regarding expression of creativity.

Leaving aside a couple of reviews that have done the comparative analysis of Bahubali with the Hollywood counterparts, majority of the movie critics have talked about how feminism, secularism, animal cruelty and racism is bane of the movie. Some have been investigative enough to do Freudian psychoanalysis of the way Shivagami looks at Bahubali, but mainly it is about findings reasons as to why being so pro-Hindu is not really ok. It would have been ok had Bahubali promoted democratic or feminist or communist or modernist agenda but like these short term goal it would have promoted, the natya would have ceased to be (almost) a classic. For a natya to be a classic, it has to go beyond these temporary and short term fads and promote eternal values.

Natyashastra is also regarded as fifth Veda. The purpose of natya or theatre is not to accommodate anything or everything. Its purpose is to promote the four Vedas just like Upanishads, Bhashyas and Puranas do. They are all complimentary in furthering a sustainable civilizational narrative. Theatre, being sarvavArnikam i.e. available and inclusive of all varnas, needs to go beyond the time or place based objectives and produce natya that communicates to masses the essence of Indic philosophy. It is one of the creative tool, a gift from Brahma to Indra, a liberal method of promoting harmony, Sanatana values and sustainability.

The question then to be asked while critiquing any theatrical performance is this: Does the performance, in this case Bahubali, promote civilizational values of harmony and Sanatana dharma or not? Bahubali does.

Aesthetics of a Natya

Most of the analysis of aesthetics in Bahubali by reviewers from MSM is limited to comments on virtual reality effects or characteristics of some characters from movie. Natyashastra, Dasarupa and all other commentaries on Natyashastra emphasize  that aesthetics are extremely important – that art is as important as the medium which includes the story (Vastu), the lead (Neta), the rasa invoked, the rupaka ( variety of drama), the abhinaya, the dialogue, the nritya (dance), the music, the karya (objective) etc. Each serves a purpose and the aesthetics should be judged in totality by the effect these produce. It is important that the message being conveyed sticks if it is conveyed beautifully.  Analysis of the above mentioned elements through leftist or modernist or any other framework, usually does not do justice to the rasa theory. Limited to class struggles and little more than that, it fails to tell the audience what is to be appreciated in order to grow culturally, emotionally and spiritually.

Let me make very basic comments on Bahubali according to Dasharupa, a treatise on Hindu Dramaturgy by Dhananjaya and try to explain few things that need to be appreciated in it:

One can delve into much more detail into analyzing the rasa, the plot elements, the dance styles, the song styles, the bhava, the types and manners of courtesans and the attendants, the kinds of love, the progression of story, the type of romance, the type of transitory states and so on, from each part of the movie. One should ideally train oneself for that.

It is one of the most vital one of the many Indian Vidyas.  Chapter 6 and 7 of Natyashastra present the rasa theory on aesthetics of performing arts. In absolute alignment with the Dharmic philosophy, Rasa theory states that the bliss one derives from a performance is intrinsic (just like Brahm). It is present in oneself. Natya is creatively prepared with the aim to experience these rasa. Drama is that art which accepts human beings are in different inner states when they arrive as audience. It provides enjoyment to those seeking pleasure, solace to people in grief, calmness to the worried, energy to brave ones, courage to cowards, eroticism to those who want company, enjoyment to the rich, knowledge to uneducated, wisdom to the educated.

The rasaanubhuti one experiences upon watching a theatrical performance is based on his or her pravritti. But the rasa one experiences is summation of Vibhava, Anubhava and Vyabhichari Bhava. While Bhava creators are generating, Vibhava is the cause, Anubhava is its consequence. In Bahubali, in my opinion, the veer rasa is dominant, sthayi bhava (permanently dominant) is Utsaha (enthusiasm) and Vyabhichari (or transitory) bhava that are 33 in number have been explored in detail at various stages in the movie. While there was full potential to introduce a love making scene to show how Mahendra was conceived, the director stayed away from the temptation because the heroic nature gets centre stage and like it is expected in Nataka rupaka, this heroic nature gets fully highlighted appropriately at the end of nataka.

The movie through its plot elements – karya – is promoting the ruler class to follow its Kshatriya dharma. The royal ambitiousness is balanced against selflessness. Just as Shri Rama is sthira-chitta, while leaving for vanavasa, Amarendra Bahubali and Devasena are too shown renuncing it all when the situation arises. The eagerness to capture throne is balanced by the eagerness to serve the people even outside the royal palace. In Bahubali, through the nayaka Amarendra and nayika Devasena, the importance of virtuous nature in those who hold the power in any hierarchal society is being appreciated.

Judiciously striving for material pursuits (artha), use of technology for better results in public and private matters, animal rights, prosperity of native breeds, expansion of polytheism, luxury and pleasure seeking behavior (kama), wish for a noble progeny, promotion of aesthetics in architecture and many more worthy goals of life are explored in the movie. It does balance the wants with the contentment. Thereby showcasing an example where one make every effort for four worthy goals (Purusharthas) of life as per Indian civilization.

A truly sensible movie is one piquing interest of the audience, invoking the intended rasa and making them search ethics and dharma in their daily lives. Notwithstanding the fact that Bahubali includes some strange, unexplainable stunts and moments, it scores on all other points listed above.

The idea of providing people what they demand has to go. Alternate analysis of performing arts based on personal whims should be reduced. The makers have to provide cinema with bhava which helps audience develop a taste for ethical and socially uplifting practices. Taking drama to be a personal affair one need not go by the shastra, but making natya for masses and as responsible art, one should adhere to the guidelines discussed in the shastras. We have to start training our minds to be attentive, understand what we watch and demand sensible cinema from the makers.

Let Nātya (drama and dance) be the fifth Vedic scripture. Combined with an epic story, tending to virtue, wealth, joy and spiritual freedom, it must contain the significance of every scripture, and forward every art.—Nātyaśāstra 1.14–15.

Ritika Sharma works in the pharmaceutical industry and is a management graduate. Her interests at present are consumer behaviour, management, and politics.