Bangladeshi Hindus are mice for cats 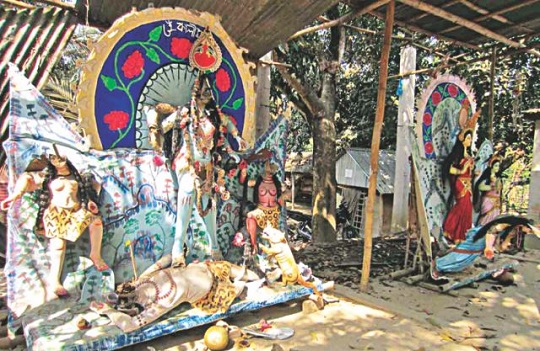 ‘This was sent by IndiaFacts reader Narayan Ukil, a Bangladeshi Hindu fighting for the rights of Hindus in Bangladesh.’

Hindus are unnecessary citizens of Bangladesh and the ease with which Hindus routinely suffer at the hands of Muslims show that after a few sanctimonious op-eds and weepy speeches, we get ready for more. Bangladesh suffers from a self-inflicted fantasy that we treat all equally. Our self-belief justifies every ‘national patriotic’ act and when our properties are looted, our homes are burnt, and we are driven out, the message that is really sent is this: this country can’t be shared with everyone. Like it or not, this began in the very bowels of 1971. That’s why it’s so deep in us.

[pullquote]If Hindus are 8 per cent of the population, they are almost zero as part of the ruling class. Almost no Hindu ever reaches the elite level which runs Bangladesh.[/pullquote]

While studying the history of 1971 it is obvious that Muslims and Hindus were treated differently by the Pakistan army and many Bengalis took advantage of that as well. As Hindus escaped to India fleeing the Pakistani pogrom, a significant section of Bengali Muslims not only looted their belongings but found it convenient to take their land away as well. Hindus leaving for India would often leave their lands in Muslim custody. While many were returned, many weren’t and it’s this appropriated property syndrome that made one of the strongest material reasons for many people to turn anti-Hindu. It was a case of collective theft. Not too many studies have been carried out on theft of Hindu lands since 1971 but Prof. Abul Barkat did a pioneering study on the issue. Here is what he says in summary.

Forty per cent of Hindu families in Bangladesh have been affected by the Enemy Property Act. This included nearly 750,000 families dispossessed of agricultural land. The total amount of land lost by Hindu households as a result was estimated at 1.64 million acres which is equivalent to 53 per cent of the total land owned by the Hindu community and 5.3 per cent of the total land area of Bangladesh. The present Government passed a new law for the return of properties to Hindus but actually it was drama because the Hindus lost more money for running the back of this law.

The survey also showed that the beneficiaries of the land grab through the Act cut across all party lines. The political affiliation of the direct beneficiaries of appropriated property is as follows:

The greatest appropriation of Hindu property took place immediately after independence during the first Awami League government (1972–75) and during the first period of rule of the Bangladesh Nationalist Party (1976-1980). Dr Barkat’s work also showed that since 1948, 75 per cent of the land of religious minorities in East Pakistan and subsequent Bangladesh had been confiscated through the provisions of the Act.

Dr Barkat also emphasised that less than 0.4 per cent of the population of Bangladesh has benefited from the Enemy Property Act, demonstrating that this law has been abused by those in power through corruption with no demonstrated sanction by the population at large.

It means that whoever is in power abuses Hindus and that includes the Awami League, the largest beneficiary of Hindu property takeover. It’s ironical that it’s this political party which enjoys maximum support from the Hindu community. One of the reasons why Hindus support the AL is because they have been left with no option but to support this party which gives lip service to them but continues to ensure their continuous repression.

The BNP on the other hand looks at them as supporters of the AL and those who have no material support base in the country. They stand in the way of gaining power and so distrust them as a community. Both the AL and the BNP take their property but one supposes the BNP feels less guilty about it. The AL is the shrewd abuser, getting their property and votes due to their public position while the BNP is the rough abuser, attacking them as the most vulnerable of all supporters on when their anger can be taken out without fearing any reprisal.

[pullquote]The AL-BNP rivalry shows that if co-existence is not possible within the majority, it is impossible that they can coexist with the minorities. This isn’t just about Hindus but every minority and the way we treat the Adivasis or the Buddhists are no different.[/pullquote]

Both parties are anti-Hindu as evidence shows.

But there are some other reasons for the oppression of minorities and one is that of ‘national identity.’ And so, if Hindus are not considered as full Bangladeshis what is the rest of the identity? It is simple: Hindus are proxy Indians and since India is hardly a popular presence in Bangladesh — water, border, unequal trade relations and lastly political manipulation in Bangladesh — they have become the closest one can get to be an Indian. A lot of people hate India and by proxy hate Hindus and a lot of them are in the BNP and Jamaat-e-Islami camp. For Jamaat, it’s different because they are proxy Pakistanis so their animosity towards Hindus and India is part of the ideology, their being. So at different times at different degrees, Hindus have borne the brunt of Bengali Muslim hate.

If Hindus are 8 per cent of the population, they are almost zero as part of the ruling class. Almost no Hindu ever reaches the elite level which runs Bangladesh. So though are the largest minority, they have no spokesperson and no organization. But then if they do, they would immediately be targeted as a treacherous outfit so they are left with no option but to hang on to the AL coattail, a party which hardly ever protects them but let the enemies get them and then use the ensuing publicity for political gain. The government will not act till they think they have got all the publicity they need. How can they not have known when  Hindus had been targetted for months on end? It would seem they let it happen knowing the attacks would serve their political ends. It was this neglect that makes them a party to the repression.

We are not a diverse society so we practice intolerance as part of a larger state making framework. The AL-BNP rivalry shows that if co-existence is not possible within the majority, it is impossible that they can coexist with the minorities. This isn’t just about Hindus but every minority and the way we treat the Adivasis or the Buddhists are no different.

Our political roots lie in minority marginalization. Tolerance and equal rights are possible only in modern law abiding societies and a state ruled by law. And so Hindu repression will go on and Hindus will continue to be denied rights as citizens of Bangladesh.