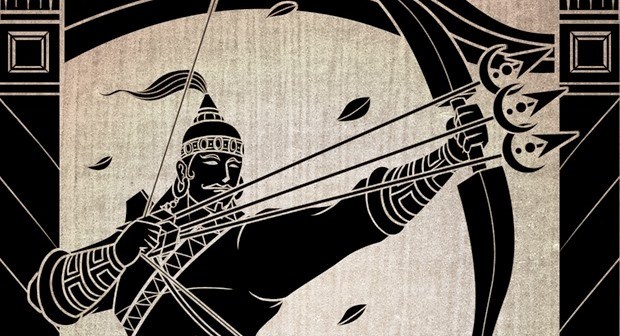 Recently a naxal sympathizer tweeted, in the context of raids and arrests of Urban Naxals.

Now power comes in many forms. An ordinary citizen with a car, home and dreams for his children, would not be considered powerful, when compared against a landless, poor naxal who is willing to die or kill in the aforesaid citizen. The naxal can threaten and extort monies from that citizen. Who is powerful and who is powerless in this context?

If the abject personal circumstances are an excuse to visit violence upon others, then the constant churn in that circumstances, means there would be no end to such violence.

So then will the naxal sympathizers, fight for the newly dispossessed. Is there an end to that back and forth, except with the destruction of everyone?

Which brings us to Barbarika.

Barbarika was the grandson of Bhima, the son of Ghatothkacha. Upon the advent of the battle at Kurukshetra, he wanted to fight alongside his father and grandfather, and his mother was unwilling. So to mollify her, he makes a commitment that if he fights, he would fight with the underdog, the disadvantaged side of the battle.

Krishna tested the powers of Barbarika and his infallible baan-arrows and was impressed, then asks whom Barbarika would favor in the war. Barbarika says that he intends to fight for the side whichever is weak and since the Pandavas have only seven Akshauhinis, compared to the eleven of the Kauravas, he would fight for the Pandavas.

Krishna then reveals the actual consequences of his commitment,

Whichever side Barbarika supports, will end up making the other side weaker. Hence, as he will be forced to switch sides to support the other side that has become weaker. So, he will keep on oscillating between two sides, thereby destroying the entire army of both sides and eventually he alone would remain.

Which serves no purpose and is a fool’s pursuit. Barbarika understands the paradox he is caught in and agrees to sacrifice himself, to neutralize his commitment to fight for the disadvantaged. And remains a mere witness to the Dharmayuddha.

It is natural for any of us to feel sympathy with the poor, the dispossessed and the disadvantaged, but that should not be confused with doing what is dharma. Advantages and disadvantages are relative, will keep changing. They are not consistent either, one person with advantage in one aspect of life, will be disadvantaged in another.

If confused people justify that adharma and violence are ok, if exercised on behalf of the contextually powerless, and seek to damage the society with that excuse, they should indeed be neutralized. In fact the three baans – arrows of Barbarika, powerful and infallible, are considered metaphors for such confusions.

So such narratives, which ignore dharma and is entirely based on identities, should not be supported.

There were feminists who claimed that, if some innocent men are ruined by the #MeToo movement, then that is an acceptable collateral damage. They are no less criminals than actual rapists. So it is dharma to neutralize them.

But would that matter to the victim of the violence?

The same narrative has been used by the Colonial apologists, that colonization by Britain was not as bad as say colonization by Belgium in Congo. Maybe, but would that matter to the dead in Jalianwala Bagh or the occupants of Kalapani?

Such reductionists narratives – the rich can do no good, all men are rapists, all women are victims, the poor can do no wrong, all corporations are inherently evil etc., are like the commitment made by Barbarika.

While in Mahabharata, Barbarika had the good sense to realize his mistake and sacrifice himself, in the present day, the Urban Naxals and Naxal apologists, have grown only strong and headstrong, that they have to be forcibly neutralized.

This does not mean that there is no sympathy, for the state of the poor and dispossessed, but to address that is to fight poverty and enable opportunity.