The Barguments of the conversion intellectuals 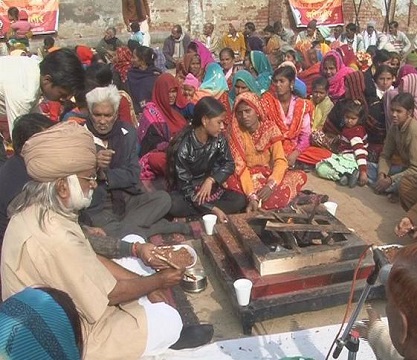 With the conversion, re-conversion debate, raging, it is futile to count how many times the “You can only be born a Hindu, you can’t convert” argument has propped up.To say that the thinking of intellectuals making this claim is retarded will be disrespectful, but ideologies and mind-sets not changed over time do indicate that serious thinking on this argument has not been done. Even if done, it is certainly riddled with hints of racism and moral high ground based superiority complex and appeal to authority.

There are hundreds like Shobha De and even Tavleen Singh who made strong yet naïve statements like “Sanatana Dharma does not permit proselytisation”. Now it is not just that opportunists like John Dayal lap up these arguments to strengthen their case of conversion but many others who bask in the uninformed glory of being Hindu atheist and liberals get influenced.

The advocates of such naïve and/or ill-informed positions give weak or no supporting evidence or perhaps lack the basic equipment to hold forth on such a crucial subject. A good place to start would be the in-depth essay titled ‘No such thing as converting out of Hinduism”, contributed by the Dharma Satya Sabha which explains in detail how Hindus have never defined boundaries for believers or non-believers.Let us attempt to refute bad arguments (henceforth barguments) in layman language.

There is only one statement that can be said as an absolute about Sanatana Dharma: it does not tell people what to do or not do. There is no question of permitting or not permitting by religious sanctions in the case of Sanatana Dharma. Because it says that all paths lead to attaining Atman, it does not mean that it restricts or clamps down on new sects or philosophical explorations or schools.

Gurus, non-gurus, everyone is permitted to take the “gospel” of his or her realization to wherever he or she wants. That is precisely why Sadhus wander village to village – to talk about dharma and Satsang, keertan, bhajans are done. That we only believe in exchange of ideas and let one practice what one feels right without force—either using the fear of hell, sin and so on. Nor is there one overarching and exclusivist personal ideology to rule the world.

Bargument 2: One is only born a Hindu

Right from the sound of it, one can classify this argument as racist. This argument is not only discriminatory in deciding who is or not a Hindu, but also imposes strict birth-based mandates on a person’s choice of principles that we call dharma.

[pullquote] There is only one statement that can be said as an absolute about Sanatana Dharma: it does not tell people what to do or not do. [/pullquote]

“ऋषिमूलःनपरीक्षितव्यः”(“the Rishi’s origins should not be examined/questioned”). Anyone can be a Rishi and anyone can be a Hindu, whether born to Hindu parents or not. Since Sanatana Dharma is about spirituality and personal choice, birth is not at all an excuse to not let someone choose Hinduism.

Perhaps people get confused by the 16 samskaras including garbhadaanam, yajnopaveetam etc and thus as per the bargument proponents, anyone who has not followed these is not a Hindu. If that be the criteria, a large majority of current day Hindus will not be Hindus, because like everything else, every community follows different rites of passages and differs in its adherence to Hinduism. There is no strict rule book which defines these samskaras as mandatory. These are part of cultural upbringing and the rituals have been modified and clubbed to suit the needs of time.

Bargument 3: How can one be a Hindu? There is no process defined

The 16 samskaras mentioned above are just some of the processes for adopting Hinduism. However, since this is not the only way, Sudhhikarana is a perfectly valid way to embrace Hinduism. Depending on which sect of Hinduism one is adopting, Sudhhikarana will differ based on the rituals and practices of the sect or branch one is going to adhere to. Vaishnavites may have different a set of rituals and guidelines and Shaivites may have another.

These may even overlap depending on who is doing the Sudhdhikarana or who is the guru or the shakha (branch) helping the convertee become a Hindu formally.

To bring in questions like what will be the jati, , gotra etc barguments is also irrelevant.  Those embracing Hinduism can choose any name, jati or gotra they want. Hinduism is a lived and practising religion where the spirit of being a Hindu matters not a person’s caste.

[pullquote]There is only one statement that can be said as an absolute about Sanatana Dharma: it does not tell people what to do or not do.[/pullquote]

Bargument 4: Hinduism is not a religion. How do you convert to a way of life?

This argument is used primarily to strip Sanatana Dharma, Hinduism, Hindutva (yes they are all the same) of its identity. To explain through a recent example, on a journalist’s Facebook post saying “Quite amused by Hinduism is a way of life argument. A way of life, all wants to nimble at and then what a bad taste it leaves in the mouth.”

Christian Evangelist and self-appointed Dalit activist, John Dayal openly challenges: “Some must file a review petition in the Supreme court against the Chief Justice Verma judgement, and have it declare the “way of Life” to be a “Religion” under the Constitutional. Will help everyone, including those who speak of a Common or Uniform Civil code. May also lead to some income tax, divorce, inheritance and women’s rights laws”

Every individual has a way of life. For some it is influenced by a fixed idea or prophet like in Abrahamic religions. For others, they get to decide their values in life and path they take to achieve their goal. Now to be very crude in identifying a Hindu, we can say: anyone who does not condemn to hell fire someone else not agreeing to former’s personal (fixed or not) idea of life and also does not want his/her ideology to be the only ideology in the world as only solution for humanity is a Hindu.

Bargument 5: I was born Hindu, but I am an atheist.

That “but” shouts out loud about a person’s ignorance of Hinduism. Strictly speaking, Sanatana Dharma does not have the Christian equivalent of an “atheist” in the sense of meaning “someone who does not believe in the Christian God.” The closest—and this is putting it very liberally—one gets to an atheist is the word “nastika,” which means “someone who abuses the Vedas”—nastiko veda nindakah.

Hinduism has a place for even nastikas—it just lets them be but doesn’t discard them or brand them as anti-Hindus or Kafir. It is today that modern Hindu “atheists” think of themselves as anti-Hindu because their ideas are influenced by atheists who have separated from Christianity and have thus received the tag of anti-Christ.

When ‘Aham Brahmasmi’ is given to individual, atheists can logically see for themselves the emphasis Hinduism imposes on individual rights, logical and personal choice. The purveyors of such barguments need to study more about such basic facts about Hinduism,  which will also lead to them being sensitive, critical but not abusive about others’ faith in religious rituals.

Bargument 6: Hinduism is not like other religions, Ghar Wapasi is a nonsense

Here it is the impracticality of an unsustainable religious model showing. Let’s not go into the detail of how Adi Shankaracharya did Ghar Wapasi, or how several other leaders and saints supported the idea of bringing people under the umbrella of Hinduism, because history is boring for our barguers. Let’s not even tell how Hinduism focuses on assimilation and not the complete removal of one’s historical and cultural belongingness—as Semitic religions do.

For nearly seven decades, Hindus of all hues have been the subject of constant and vicious attacks by Marxists, Evangelists, Islamists as well as western atheists typically for imperialist and ideological motives.

Now it is the firm cultural belief of Hindus that to get Gyana, a student must come to the guru. But with changing times, needs and rules change. We are blessed to be part of a culture which does not restrict us to write a new book or come up with a new Guru.  Now let us understand the need of the time and take inspiration from Pope Francis’s address to the College of Cardinals: “Let us never give in to pessimism, to that bitterness that the devil tempts us with every day. Let us not give into pessimism and let us not be discouraged. We have the certainty that the Holy Spirit gives His Church, with His powerful breath, the courage to persevere, the courage to persevere and to search for new ways to evangelise, to bring the Gospel to the ends of the earth.

Christian truth is attractive and convincing because it responds to the deep need of human existence, announcing in a convincing way that Christ is the one Saviour of the whole of man and of all men. This announcement is as valid today as it was at the beginning of Christianity when the Church worked for the great missionary expansion of the Gospel.”

Let us give Francis a serious thought because for many he is the respected face of secularism in the Indian media and no Indian sadhu or sant can ever match his secularism.Perhaps no other religion has so many sects, sants, panths, and sadhus as Hinduism has—some of these date back to several centuries and are still thriving. Yet, not one of these promotes hatred against different faiths that “the devil tempts us with everyday.”

Let each one of us understand the importance of our legacy which flows not just in religious rituals but also in idols, architecture, arts forms, science, literature, philosophy and critical thinking. Let us have the courage to persevere and search and support new ways to sustain Sanatana Dharma, the Eternal Dharma.

Ritika Sharma works in the pharmaceutical industry and is a management graduate. Her interests at present are consumer behaviour, management, and politics.