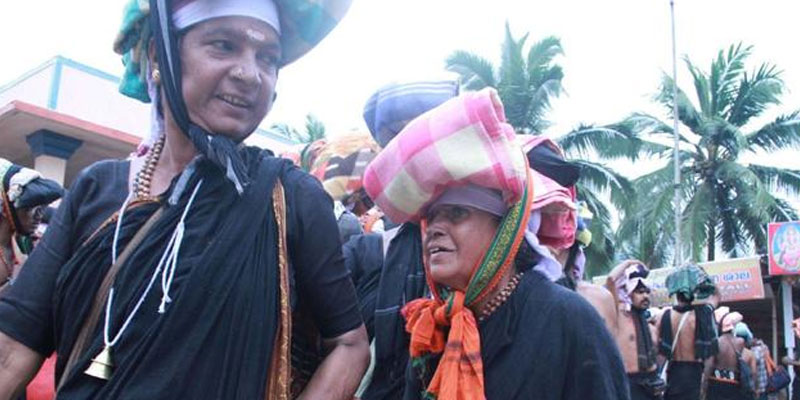 I am neither for, nor against the ‘entry of women’ into Sabarimala devalayam. But I strictly oppose the frame work within which the issue is being debated, at least in the public domain.

Anyone who looks at the Sabarimala issue related to entry of women, in isolation, cannot understand the bigger and the real picture. It has to be looked at as an attack on Hindu Dharma and its traditions in tandem with several other bans, restrictions, Human/Women/Animal/Environmentalists fight against Hindu festivals/traditions like Jallikattu, Dahihandi, Holi, Deepavali, Ganesh Chaturdhi, Made Snana etc. The purpose is to restrict Hindus celebrating their festivals/traditions, disconnect Hindus from their tradition and there by facilitate religious conversions. Make no mistake; none of the groups fighting against Sabarimala Devasthanam has any love for women. The major problem that women in India suffer from is the alcoholism of husbands. But feminists, rather than fighting against this menace, support females who are becoming alcoholic, in the name of equality.  Dharma proposes equality by advising men against alcoholism and feminists try to bring equality by making even females alcoholic. Feminists stand support businesses and Dharma supports human welfare. Fighting for women entry in Sabarimala ignoring alcoholism is like treating a patient for dandruff ignoring cancer.

What is ‘Sabarimala Issue’?

There are lakhs of temples and only a handful has such restrictions – So there is no discrimination against women in Hindu temples.

Hinduism is the only religion in which the divine is worshipped in feminine form – So Hinduism doesn’t discriminate against women.

India is one of the safest places for women, as the respect for women is drummed into Indians from childhood. Anyone who lives in India with an open mind can see this everywhere and for those Westernised, elitist, feminists, statistics are available to prove this2.

Not just the restriction on women with active menstruation cycle, Sabarimala also have several other restrictions/specialities.

Hindu devalayams are built based on Aagama Sastra, an ancient Bharatheeya science. Aagamas are classified into three types, namely Saivagama, Vaishnava Aagama and Sakta Aagama. There are 100s of Agamas and most of them fall into one of these three. Every Hindu temple is supposed to be built as per one or the other Aagama. There are specifications mentioned starting from selecting the land to selecting the stone (Pum-sila is used for the moorty of Purusha Devatha, Stree-sila for the moorthy of Stree Devata and Napumsaka-Sila for the rest), Pranaprathista of the devatha moorthy, Naivedyam, Devalaya Pooja, Alankarana of the Moorthy etc. Everything about a devalayam is based on Aagama Sastra, including the restrictions on women with active menstrual cycle in Sabarimala.

Ayyappa in Sabarimala is a Nitya Brahmachari and the prathista of Ayyappa is a Brahmachari Pratista (Pranaprathista of the Moorthy). As per Agama Sastra women with active menstruation cycle should not visit a temple with such a pranaprathista. The same agama that says about the presence of divinity in temple also talks about various restrictions. One that believes in divinity in devalayam should also respect restrictions. Those who don’t have respect for restrictions effectively means that they don’t have respect for either agama sastra or devalaya vyavastha. It is hypocrisy to say that I believe in divinity in a devalayam but don’t care about the restrictions. Is it not stupidity to say that “I believe in medical science but don’t care about the food restrictions the doctor suggest”? Having said that, I don’t advocate being frozen in time. The strength of Hindu Dharma is that it has been changing with time and it should continue. But the changes should be discussed and made within the framework of dharma and not Western Feminism or Western Liberalism or Western Modernity or some other Western imposition. So, it’s the pundits of Aagama Sastra who should debate and decide whether or not certain restrictions can be relaxed. Whether it is Sabarimala or Sanisingnapur or anything else, it’s the Agama Sastra Pundits that should take a call and not a novice feminist or a TV anchor who don’t even know the basics about devalayam. Who will take a call about the restrictions in a nuclear reactor, a nuclear scientist or a TV anchor? The same logic applies to devalaya vyavastha as well.

There are several temples with different restrictions as per the agama Sastra. For example every one can enter the garbha gudi, without even taking bath, of Srisailam, touch the Siva lingam and do abhishekham but in Srikalahasthi, another Sivalayam, no one is allowed even near the garbha gudi. Different kinds of pranaprathista, different rules.

Aagama Sastra doesn’t sound scientific or logical to these so called activists. So does devalaya vyavasta and so does Ishwara. The logic/rationality that is being used do mock at the restrictions in Sabarimala can be used even to mock devalaya vyavasta and even the very existence of Ishwara. If ‘modern science’ is the framework of debate, forget about restrictions, the concept of Ishwara itself don’t stand modern science. Then why not destroy all the temples and use the empty land and wealth for hospitals, schools, wine shops, cinema halls, shopping malls, slaughter houses etc. Neither the restriction of the entry of women with active menstruation cycle into Sabarimala Devalayam nor the concept of Bhagavan/Ishwara don’t stand the science we now know. Modern science is yet to evolve to a stage where it can understand these things.

People who call this tradition of Sabarimala as discriminating are either ignorant or are doing this with an objective to harness victimhood in Hindu women. Sabarimala is a typical case where the facts are twisted to manufacture atrocity literature3 to suit the pre-decided agenda to destroy Hindu culture and traditions to facilitate conversions.

Advocate Naushad Ahmed Khan is the president of the Indian Young Lawyers Association which filed the PIL in the Supreme Court seeking for the lifting of restriction in Sabarimala. It would be interesting to know his views on Triple Talaq, Burqa and other discriminatory practices of Islam against women. What is the interest of Sri Naushad, a Muslim, in Sabarimala, a Hindu temple, is anybody’s guess.

The Truth behind Truthseekers International