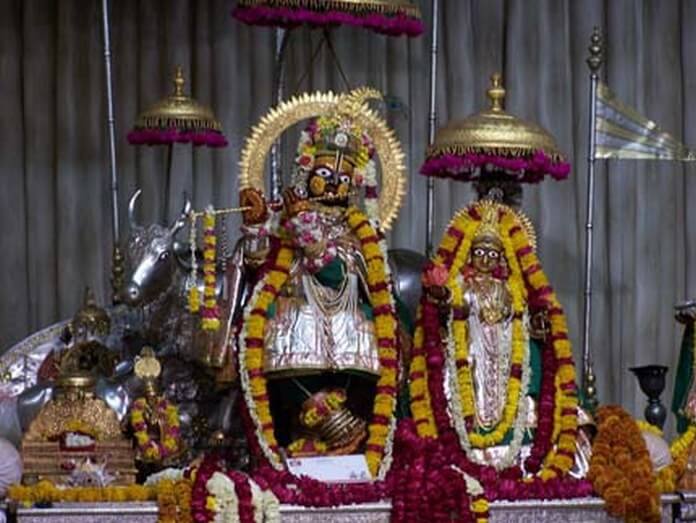 As I sat in front of the garbha griha of the Govind Dev ji Maharaj temple in Jaipur, the chants of Govind Dev ji were beautifully sung in symphony by the numerous devotees, such that it would give any philharmonic orchestra a run for their money. I was a hungry soul looking for a place where I could satiate my hunger for connecting with the divine while there. I connected to not only the higher powers that embrace the temple but also the bhakti and shraddha of the hundreds of devotees who throng the temple every day.

The Govind Dev ji temple has a story of valor and devotion just like many stories of the Rajputs. The murtis of Govind ji was removed from Vrindavan when Aurangzeb was attacking and destroying all the temples of the north. Legend has it that Govind ji appeared in Raja Sawai Jai Singh’s dream and asked him to bring the murti from Vrindavan to Jaipur. Raja Jai Singh did exactly that and brought the murti to Jaipur for safekeeping. Much later Raja Man Singh built a magnificent temple in the city palace complex. Notwithstanding, the terror unleashed by Aurangzeb and many others, the temple has stood the test of time and resilience much like the devotees.

The curtains were drawn just before the Gwal Aarti time at 6 pm. I sat in front of the garba griha along with other devotees waiting for the aarti, there was constant chattering and exchanges over the anticipation of the rising of the curtains. I found all of this very normal especially during waits for any Aarti or abhishekam and thus, I made up my mind that I would really need to work harder to concentrate on why was I here in the first place? Then suddenly there was a hush and the chattering gave way to waves of gasps and silence. The curtains were drawn, and everyone sprung from their seats to catch the sight of the resplendent Govind Dev ji in all his grandeur. I was left speechless and mouth slightly open admiring the aabhushan and aakarshan of the Lord. But what drew me closer to the Lord was the bhakti I felt around me.

Imagine what would happen if hundreds of people chanting their hearts out in praise of the Lord and their energies (body, mind and soul) all directed towards touching the divine within themselves? Surely, you would not be untouched. I used to visit temples and could never understand the fuss about chanting and concentrating on the murti. But now I understood it was more than just a habit or a fear out of which people pray or devote themselves to the rituals. My resolve that I would have to work harder in a crowded place was thwarted and my work was cut to half. As I closed my eyes to travel deeper, the energy of the devotees and community took me several places deeper than what I would have if I were alone in that temple, in fact my work was cut down by almost half. No wonder in India we give so much importance to the community and being part of one. After all, we are not born in isolation and always part of the larger context. One may not realize it but that is a huge strength for us to be better human beings. We all have our asuric and animalist tendencies, but to help you recognize that, become aware of that and then help you create new patterns is where the community steps in. An opportunity to look at these patterns, talk about it in a non-judgmental way and then choose to allow the daivic forces to take precedence is what a community living is all about. Of course, all of us need to feel a need for a community for the forces to help you.

I felt a major shift in my energy and being as I was also being churned in this samudra of bhakti and shraddha. I entered the temple tired and hungry, and my mind was restless bordering on crankiness. But the chiming of the temple bells and the singing of the aarti sounds calmed my harsh restless mind like a crying baby being put to sleep by a Mother’s lullaby. It was so soothing and calming; the moment this happened, the thought of ‘I’, ‘Me’ and ‘my feelings, my emotions, my needs’ dropped and I could touch the divine within me finally. It happened very easily and somewhat magically. I had done my atmapradakshina. The taste of sweet amritam and saativik tulasi leaves as prasadam was enough to satiate my bodily hunger and thirst. A simple act of bhakti and concentration, solves even your day to day practical needs of hunger and thirst. I can only imagine the consequences of actions which are seeped in bhakti; they can only be dharmic.

After doing a pradakshina of the temple, I sat at the periphery still absorbing the devotional energy and consolidating my energies. A little girl came up to me with a patram (bowl) of chandanam paste (sandalwood) to be applied as tikka on the forehead, I gladly obliged. She gave a very curious smile to me and even as she walked on, she kept looking back at me. After much thought she came up to me and asked me if I was an Indian? I answered in Hindi to prove that I am as much Indian as her and loved being part of the Aarti. She was thrilled to know that, and she went hop-skipping away. I understood why she asked me that question; our anglicized looks and our ‘oh not so cool’ attitude never really understood the real jnana, bhakti, rituals, chanting or temples. Sadly, our colonized minds never really went beyond what was taught and sought the truth. The truth as I saw it was very simple and beautiful. In front of me were people from all walks of life and ages (there was no discrimination or separate lines) who congregated here setting aside their daily quests for something higher and more grounding. They came together for a common mission or ground of immersing themselves in bhakti or devotion to the supreme being. The bhakti marg if consciously and honestly applied to one’s life can bring about so many shifts within, thus automatically shifting the external also. Just like Arjuna devoted himself to having deep conversation with Krishna and setting his concentration on him, his actions always proved to be dharmic in the end. That Krishna, the guru, the teacher, the divine, the supreme being or whatever is it that you may like to call is residing deep within us. Temples like Govind Dev ji are only mere triggers to help you connect with the divine. What started off as simple curious visit to the temple, turned out to be intensely humble and gratifying experience.

Gayatri Iyer is the curator for CreativeIndia and Indic Academy, plus an eternal artist & traveler with a mission to discover the unknown, lost and beautiful parts of herself while also discovering the true meaning of her roots of being an Indian in today's context. A free spirited yogini with a deep love for yoga, India, theater, food, watercolors, story-telling evident through her book, Life's Macchiato: A collection of your stories,.The best part is that all these passions saw the light of the day through her adventures like her food start up Chef In A Box, a designer stationery line called Ahem, Theater performance in a play called Unrest, freelance illustrator, story teller, travel and creative consultant. Oh the list is not ended, stay tuned for more of her!