Being with the Gods 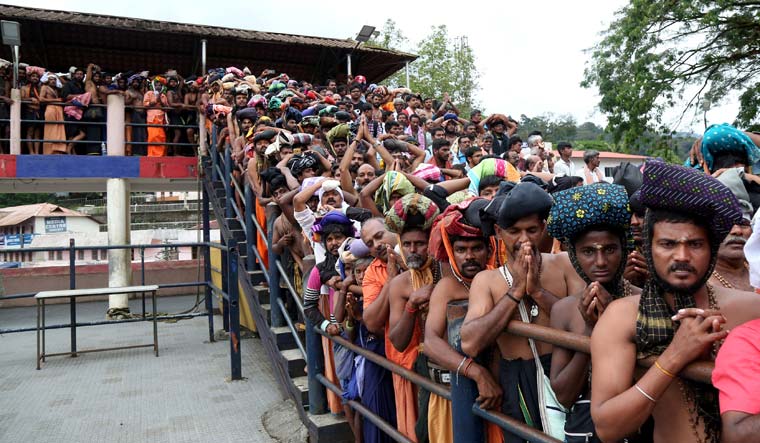 When I was a student of Carnatic music during my childhood, I would often sing devotional songs to Lord Ayyappa, to ‘Hari Hara Suta’ as he is called, as I did to different Devis and Devatas. One of my favourite pastimes as a little boy was to set up many little shrines at home. I would gather pictures of Gods and Goddesses from our yearly trips to India, and make mandirs in different corners of the house, then dismantle them and set them up anew on special days. I’d decorate them on festivals and I believed, truly believed, that these beautiful beings were my guardians; that their presence was an unquestionable blessing upon our home and family. I was firmly convinced that it was Lord Hanuman who made sure we flew safely back home after our yearly pilgrimage to some of India’s holiest shrines.

I was always taught to approach the Gods and Goddesses with reverence, with a heart full of love, for there was no greater emotion than love that they responded to. I knew that each one of them had a unique story to tell just like each person on this planet has their own story, and I respected this plethora of divine stories that made Hinduism and Sanathana Dharma such a precious mirror of the intricacies and inter-connectedness of life itself. And so it has been for me since then. Every time I have darshan at a temple, I look in to the eyes of the deity and I know that he or she is connected with me through love, no matter how fearsome their appearance on the outside.

Woven in to their appearances are stories, traditions and practices that cannot be comprehended fully without an understanding of the Yogic view of life and life energies. There are spaces within temples where men and women are allowed to be together and then there are spaces where both genders are segregated. All Yogic practices have different approaches for the genders, not out of discrimination, but out of a profound understanding of how energy flows differently for each. There are some temples exclusively for women, some exclusively for men, most are open to both. One thing I learned even at the age of nine and ten as I was introduced to the many stories of our Gods and Goddesses, was that for every generalisation that could be made about Hinduism, there is an exception waiting round the corner. One of my great struggles growing up was trying to explain the idea of such unprecedented philosophical diversity to my friends from other faiths who often taunted me about why Hindus worship so many “weird looking Gods” with “strange stories around them”. How could I even begin to adequately explain to them what I knew, understood and felt so deeply in my heart.

Today, as the Sabarimala episode plays out in Kerala, I do not comment on the legalities of what is going on. But what does strike me, what pains me, is the absence of any sentiment of Bhakti (devotion) in the words of the activists who claim their right to ‘reform’ the temple traditions. The ruckus they make seems less about ‘reform’ and more about vitiating the temple environment and destroying its established traditions. The public posts of one such activist on social media clearly betray her contempt for the sanctity of Hindu traditions. To the invaders in the medieval times who destroyed thousands of our temples, the idols were mere pieces of stone that could be smashed to the ground by the arrogance of one who desires to feel stronger than the Gods themselves.

I believed as a child that my little temple at home was my enormous strength. I cannot even begin to conceive of how much power our ancient temples hold, where millions through the ages have consecrated the sacred spaces with their Bhakti and derived a unique strength from these spaces to lead their lives. When Mirabai revolted against the order of the day, she was bristling with Bhakti, her only aim was to be with her Krishna. She created music, she created poetry and legend, that survived long after the rigidness of her time was dead and gone. The great luminaries from Adi Shankara to Bhagavan Ramana Maharshi to Mata Amritanandamayi – all have come from a place of profound Bhakti. And what beautiful direction they have provided to the seekers of Sanathana Dharma. It is Bhakti that truly reforms, not irreverence.

When the shrillness of irreverent noise is too loud to bear, I retreat to the experience of my shrine that we are taught to ultimately find within our own selves. The traditions tell us that if we truly want to experience the divine, go within where the whispers of eternity are heard in the silence of the meditative mind. The outer shrines are where the Gods and Goddesses reside in time. The inner shrine is where the Gods and Goddesses are unshakeable through time. Both are a part of our lives – an inseparable play of the outer and the inner. Both I know to be true. Both are worthy of great reverence.