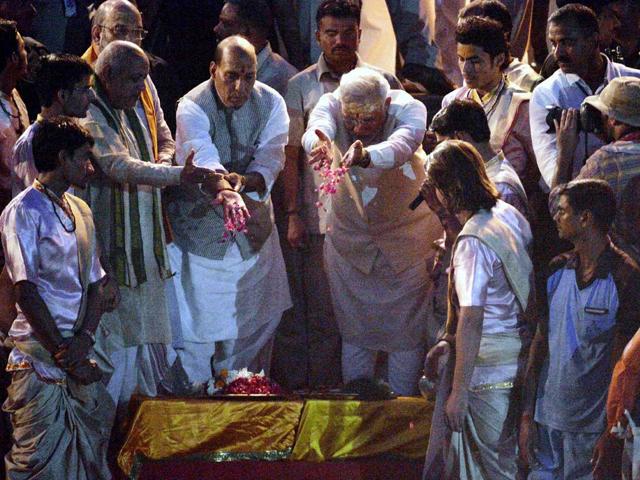 Two years have passed, since the so called Hindu Nationalist Party, the BJP was elected with a whopping majority to the lower house of the Parliament, the Loka Sabha. The BJP was successful in creating an atmosphere of positivity and hope for the masses and thanks to its charismatic PM candidate Shri Narendra Modi, it was also successful in rightly tapping the aspirations of a young India. But, electoral Pundits have long debated if these were the only causes for the BJP’s decisive victory. Some have, time and again, asserted that it was the cultural aspirations of the Hindus, which brought them to power.

While I cannot tell how the BJP itself views its victory, I can vouch for the fact that a large number of hard working and dedicated volunteers, who were truly responsible for the win, did see in BJP an end to administration by self-alienated and self-hating ‘seculars’. There was a huge aspiration to have a government, which was sympathetic and proactive towards Hindu causes. But, two years down the line, it appears that the hopes were ill-founded and based on ignorance about political realities. The question, which many are asking now is, whether the BJP is hampering Hindu revival? Whether it is becoming the biggest hurdle to achieve the goal of rejuvenation of Sanatana Hindu Dharma?

The task of Hindu revival is certainly not simple. Enormous challenges and obstacles, especially from well-set, deep-rooted ideologies, would have to be overcome at every single step. To re-establish Hinduism as something more than a “primitive”, “pagan”, “confused polytheistic religion” in the mainstream discourse, adventurous intellectual endeavours must be undertaken. Modern day world is no more measured on the physical strength of the people, but on the strength of their intellect and ideology.

A task like this must need a strong, confident and a well-rooted leader. For long, Hindus have put their weight behind RSS/BJP to bring about Hindu rejuvenation, or rather, RSS/BJP has for long thrust itself as the leader working towards the Hindu cause and yet, at a very fundamental level, especially in the intellectual sphere, very less progress has been made.

Whenever the BJP has been elected to power, be it at the Centre or at the States, it has neither tried to develop a network of intellectuals and academic think tanks dedicated to creating India’s grand narrative and preparing a Hindu response to various contemporary challenges, not has tried to bring in policy changes, which could be considered as favourable to Hindu cause. Though, of course, it has put forward few initiatives towards this directly, it is too little and too late. More importantly, many of them were implemented hastily and in a compromised manner, and some were even aborted in the middle as soon as an allegation was thrown at it.

The BJP has for long been afraid of getting branded as a Hindu party and has been desperately pleading to ‘Indian Secularists’ to certify it as a “secular enough party”. This, however, has not materialised for a simple reason that no matter what the BJP says and does, BJP/RSS simply do not fit into their ‘secular narrative’ and political scheme of things. The two years of the Modi government is no exception to this.

During the last two years, the Modi government has hardly shown any inclination towards addressing outstanding Hindu issues like Uniform Civil Code, Article 370, revising history curriculum, freeing of temples from government control,  cow-protection, and addressing the issue of evangelism. There is no indication that the things will change in near future.

It is quite evident that many of these issues are simply raked up during elections and once in power, they are put on to the back burner to be used again during the next elections. All these compels one to re-evaluate the role BJP in Hindu revival.

The RSS-BJP duo carries with it a sense of apologetic and defensive attitude. Though, presently in power, it is still an opposition in the academic and intellectual contours of the Indian psyche. The RSS/BJP, in-spite of having a strong, nationalistic, self-less and determined cadre base has failed to develop a coherent theory for the Hindu revival movement. It has failed to evolve any political discourse rooted in Indic worldview. Instead of changing the terms of engagement with the people and other political parties in its favour, the BJP, for long, has walked on the path laid down for it by other opinion makers like secularists, Marxists and the west.

This has led to huge information gaps and large-scale misunderstanding of the Hindu revival movement among the intellectual classes, as well as the masses, all across the world. As a result, most information reaching the public regarding Hindu issues, are provided by those ‘intellectuals’, who are blatantly hostile to concerns of Hindu community and hence create a Hinduphobic narrative around most such issues.

It is this biased narrative that has created misleading tags like Hindu terrorism, Hindu Nazi, etc. and has falsely branded legitimate issues of Hindu society as fascism. The stray “headlines grabbing” actions of the Hindu fringe and BJP/RSS’s inability to reign in on them only adds to reinforcing these misleading tags. But, the greatest failure of RSS/BJP is in its inability (and disinterest) to counter these false narratives and build a genuine Hindu narrative on the foundation of truth and Dharma.

This inability and a disinterest in fighting the ideological and perception by the RSS/BJP make one question, whether the BJP is hampering, more than helping, the cause of Hindu revival?

It is high time that Hindus come out of their cocoons and work towards understanding their own culture, tradition and identity. Instead of depending on political organizations like BJP, they should become responsible and make efforts to revive Dharma and create India’s grand narrative. Hindus have become weak not because of others, but because of their own inertia. For India to truly rise, it is high time that Hindus build a strong and confident Hinduism rooted in the eternal principles of Sanatana Dharma.