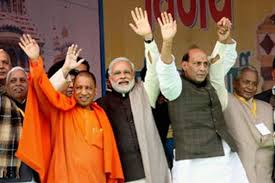 The Bharatiya Janata Party’s dismal performance in Assembly by-polls has elicited pro-forma reaction from rival parties and intellectuals. There is considerable déjà vu and not inconsiderable glee, especially among the self-appointed moral guardians of Indian polity and society. Rattled by the historic Narendra Modi victory a few months ago, they were depressed and dismayed for quite some time. And now there is something to cheer about. As usual, in their merriment, they have messed up the analysis of by-election results.

This is not surprising, though, for the events have unfolded exactly in accordance with the secularist script. Intellectuals said that Modi won because of the development agenda, the promises of good governance and corruption-free administration, but after victory he allowed the ‘communal’, ‘polarizing’, and ‘divisive’ forces to call the shots. The likes of Yogi Adityanath and Sakshi Maharaj were ‘unleashed’ on unsuspecting masses, but the great and plural traditions of our country triumphed. Hence the setback to the saffron party. And hence the unsuitability of the issues of love jihad and madrassas.

All this would have made sense had the BJP lost under Modi in general elections. For nobody in India can be, in the liberal lexicon, more ‘communal’ than him. He is perhaps the only leader of any consequence who has been calumniated as a “mass murderer” in the mainstream media. Yet, he never echoed the clichés, half-truths, and untruths of our public discourse—‘all religions lead to God’, ‘no religion teaches terrorism’, et al. He publicly refuses to wear the skull cap; he publicly felicitates the accused in Muzaffar Nagar riots—and that too in the run-up to the general elections. It was actually the media that sold the story that Modi was ‘communal’ in 2002 and for a few years after that, and later became the mascot of development. Fact is that he never backtracked or showed guild for his political beliefs like L.K. Advani in order to appear more acceptable to the liberal mob.

The intellectuals lack not only cerebral acumen but also moral courage. It is a well-known fact that Modi is all-powerful not only in the government but also in Sangh Parivar. His alter ego, Amit Shah, is the BJP president. The RSS, too, doesn’t seem to have any problems with the ‘Hindu Hridaya Samrat’ (the King of Hindu Hearts). Obviously, the BJP’s strategy for by-polls could not have been formulated without his consent. So, why the scapegoating of Yogi Adityanath and Sakshi Maharaj? Why not lambaste the big man himself? Is it because he is too powerful to be trifled with?

Besides, what is wrong in raising the issues of love jihad and fundamentalism-spawning madrassas? The term, by the way, was coined by the Kerala High Court, and not some ‘communal’ organization. Way back in December 2009, the court had found indications of ‘forceful’ religious conversions under the garb of ‘love’ in the state. “Under the pretext of love, there cannot be any compulsive, deceptive conversion,” the court had said. Justice K.T. Sankaran had also urged the government to consider bringing in a law to ban such ‘deceptive’ activities.

Further, it is not just the saffron outfits that are campaigning against love jihad; Christian bodies are also outraged by the vile jihadists masquerading as lovers. Even the former Kerala chief minister V.S. Achuthanandan, a Marxist, talked about it.

The lives of countless girls have been ruined because of love jihad. Unfortunately, this has failed to trigger any response from the otherwise active and vocal feminists. This is in line with the global trend: feminists all over the world turn a blind eye to the increasing atrocities against and suppression of women in Muslim countries.

Media Brahmins too like to blindfold themselves when it comes to ‘communal’ matters like love jihad; they refuse to see the thread of radical Islam running through Hamas’ aggression against Israel, the ravages of the Caliphates in Syria and Nigeria, the increasing radicalization of Muslim youth all over the world, and the growing virulence of madrassas everywhere. Has everybody forgotten the role Islamic seminaries have played in promoting jihadist terror? Doesn’t anybody know about the origin of the Taliban?

There is another danger of the interpretations peddled by the media: often they tend to hurt the cause of liberalization. It happened in 2004: prominent opinion makers saw reforms like privatization as factors contributing to the fall of the Vajpayee government, and the consequence was the revival of Nehruvian socialism. The BJP’s loss in Rajasthan may lead to the slowing down, if not derailing, of the good work started by the Vasundhara Raje government. As it is, the RSS bodies are uncomfortable with the liberalizing moves, especially labor reforms, carried out by her. One only hopes that the loss of three Assemble seats does not hit reforms.