THE BLATANT CASTEISM OF RAJDEEP SARDESAI 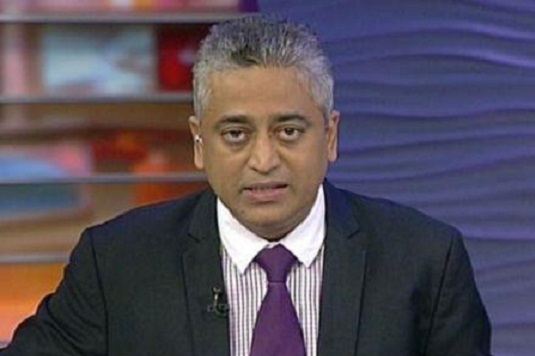 This tweet was made on 9 November by eminent journalist Rajdeep Sardesai the occasion being the swearing in of two new ministers in the Modi cabinet, both belonging to the Goud Saraswat Brahmin group: Manohar Parikkar and Suresh Prabhu.

The likes of Sardesai   are  the same eminent journalists who are ever ready to poke us with their moral compass reminding us how we all need to strive for a casteless society, but when they indulge in such practices it is all kosher. Double standards much?

Before proceeding further let me produce an excerpt from this not so casteless piece:

When the VHP was first formed in the sixties as a loose organisation to feed into the programmes of the RSS and strengthen Hindu feelings among the diaspora, among its founders were Brahmins like K. M. Munshi and Ramaprasad Mookerjee. Subsequently during the Ramjanmabhoomi movement, caste differences were suppressed in the overall mission of creating a Hindu monolith. But over the last decade, the VHP has become transformed from an organisation of traders, petty industrialists and provincial bureaucrats to a grouping whose cadres are made up predominantly of Other Backward Castes (OBCs).….. new generations are all OBCs or Shudras. Pravin Togadia? Patel, sometimes classed as ‘Backwards’. Narendra Modi? OBC. Uma Bharti? OBC. Vinay Katiyar of the Bajrang Dal? OBC. Acharya Dharmendra? OBC. Sadhvi Rithambhara? OBC. Kalyan Singh? OBC. The VHP is thus, today, a movement that has been described by a Dalit historian as a movement of ‘Shudra Hindutva’…….. While the RSS may be made of genteel Brahmin patriarchs, the Shudra Hindutva of the VHP is a violent protest movement against all elitism, a social revolution aimed to snatch power from the speakers of angrezi and the wearers of bell bottoms……

These words were penned by the equally eminent Sagarika Ghose, the better leg of Mr. Moral Compass, which she threw out of the window while making such ‘classless’ claims as Mr. Sardesai calls it.

But hey it is all fine if the targets of their venom are a bunch of ‘slumdog Hindus.’ For long the image of a Hindu Nationalist in the media was that of a violent narrow-minded dogmatist who besides treating the minorities with contempt is also an upper-caste supremacist. At least that is what the bulk of our eminent liberals in the media had us believe.

The decades of Congress rule and the academic imperialism by the Marxists created such a scenario that anyone speaking of ‘Hindu culture’ or even ancient India’s heritage was termed a bigot.

And if the alleged ‘bigot’ was not well versed in the colonial language of their love,  he/she would be ejected from all platforms of public discourse into the wilderness. Adding to this unfair arrangement is the existence of an impatient and angry mob who would hurl constant abuses at their opponents just to make a point.

[pullquote]The likes of Sardesai   are  the same eminent journalists who are ever ready to poke us with their moral compass reminding us how we all need to strive for a casteless society, but when they indulge in such practices it is all kosher. [/pullquote]

So the liberal eminences were stumped when they saw a sharp rise in the number of speakers/writers who are not troubled with regional and caste biases, who are amazingly well-informed on national issues and world affairs, and most significantly who are rooted in Indian culture and well-versed  in English simultaneously.

It is not that such types did not exist before, but the academic gatekeepers were not willing to let them speak, a power they no more possess. But even in this case the eminences pick on the impatient bunch and box them together as the belligerent cohort of ‘Internet Hindus.’ In the words of Kanchan Gupta:

Contrary to the impression that is being sought to be created by their critics, ‘Internet Hindus’ are open to ideas, believe in a plural, law-abiding society and swear by the Constitution. They are often appalled by the shenanigans of our politicians, including those of the BJP, and are ruthless in decrying politics of identity and cynical vote-bank policies. They have no gender prejudices and most of them think banning FTV is downright silly in this day and age. The ‘Internet Hindus’ will not countenance denigration of their faith or biased media coverage of events, but 91.9 per cent of them respect and accept other religions. ….

So why do they infuriate pseudo-secularists in media and make Delhi’s commentariat see red? There are three possible explanations. First, the Net is beyond the control of those who control newspapers and news channels. While the print and audiovisual media have for long excluded contrarian opinion and denied space to those who disagree with absurd notions of ‘secularism’ or question the quality of reportage, the Net has provided space to the ‘other’ voice……. The elite who dominate newspapers and news channels are seen by ‘Internet Hindus’ as part of India’s past, not future. As one ‘Internet Hindu’ writes in his blog, “A large number of ex-elite can’t stomach fact that children of bankruptcy are better travelled, better read and dominate the Internet!” Harsh, but true.

And this was exactly what occurred  during the 2014 Lok Sabha elections when these ‘Internet Hindus’ were ready with facts backed by solid evidence to counter the secular propaganda against the eventual winner Narendra Modi. This cyber-activism made many secularists descend to levels of impropriety as showed in this satirical piece:

Modi has never been to college and his degree is from a correspondence course. His writing, which is all in Gujarati, is mainly hagiography. It is mediocre and shows little awareness of the world. He has not travelled much outside India. His poetry is shockingly banal. Personally, I am not enamoured of a man who thinks up such rubbish. Unfortunately, his English is also poor, which, in my opinion, has contributed to leaving his mind unopened because there is little access to the world for the Gujarati-only individual. Modi would not have reached the position he is in today, within striking distance of becoming the prime minister, in a civilised nation because he isn’t qualified.

Modi is a Ghanchi, from the trading caste of oil-pressers and grain sellers called Teli in north India. Ghanchis are categorized as Other Backward Class. Education is not a priority for him because there’s hard work required and real thinking, a proper clash with the RSS. …..In Gujarat, the caste that has put and kept the BJP in power for two decades is the Patidar community of Patels. The caste dominates every BJP cabinet and Narendra Modi is actually the leader of the Patels, just as Mulayam Singh is the leader of Muslims in UP…….The BJP is generally a good representative of India’s unthinking and angry middle class. Under Modi, this desire to not be inclusive is amplified and so the problem of allies has become bigger. None of the BJP’s old friends remain with it but for two fellow communal parties: the Sikhs of the Akali Dal and the Marathi chauvinists of the Shiv Sena.………India’s democracy functions because of caste. The basis of voting is not issues or ideology, as in European democracies, but the preference for one’s own. The Brahmin and the Bania still control the economy, but now the Shudra controls politics. The BJP has always been a party of Brahmins. The RSS takes its Brahmins seriously and grooms them young. …Does the Congress leadership have a theme today? I think so. It is the mercantile castes. Prime Minister Manmohan Singh is a trading Khatri, P. Chidambaram is a trading Chettiar and Kapil Sibal is a trading Khatri. Murli Deora is a Baniya. Of the other senior leaders, SM Krishna is a peasant Gowda and Antony is Syrian Christian. The difference in orientation – Brahmin versus Baniya – shows in the priorities of the BJP and Congress.

The satirical writing shows a trend that has going on for some time now: the liberal eminences declared the existence of two evils in Indian society: casteism and communalism. But in their view communalism was the greater evil as it can lead to “Hindu majoritarianism.”

And since the RSS aimed at breaking down caste barriers through its various activities the eminences went the other way. They termed all attempts at Hindu unification, as more dangerous than caste divisions and put their faith in caste-based parties such as the Samajwadi Party and the RJD. To them the thugs of these parties were the secular defenders against casteless Hindu Nationalists. But alas! Their titanic of falsehoods sunk once it collided with the nationalist iceberg.

In defeat, it seems the veil of secularism is slipping off from the faces of these eminences, so we see the ever so moral Rajdeep Sardesai display caste pride, abuse and attack NRIs, and to top it all call the next gen Gandhi Princess an  ‘item girl.’

It seems the moral compass of these eminences is swinging, flailing wildly on the stormy waters that Narendra Modi has released.   Except that the compass is directionless.