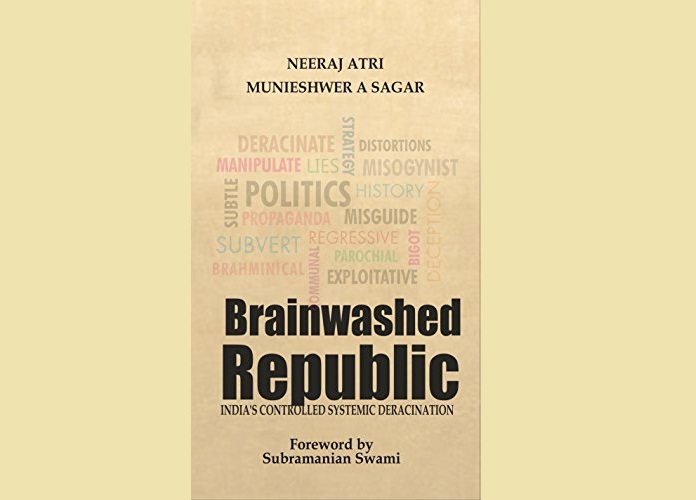 Brainwashed Republic by Neeraj Atri and Munieshwer A Sagar has been published by Abhishek Publications and is available on Amazon.

The difficult to put down book, ‘Brainwashed Republic’ authored by Neeraj Atri and Munieshwer A Sagar, rings an alarm bell in the mind of the reader about the future of the Indian nation. The incisively researched treatise is a no-holds-barred expose` of the lies and damned lies being propagated by the National Council of Educational Research & Training (NCERT) to poison the minds of school-going children against their own national ethos and historical heritage.

The researchers have traversed the entire gamut of multiple falsehoods cleverly embedded by the anti-Hindu leftists into the model text books prescribed by Marxist manipulators since 2005. The new books and syllabus introduced by the Sonia Gandhi led UPA government have been used to showcase the foreign invaders and colonialists as benign rulers, and pouring scorn on Vedic civilization and Indian heroes. In sharp contrast, lavish praise has been showered on Muslim invaders and buccaneers in the school books approved by NCERT.

The falsehood preaching text books were introduced in 2005. Thereafter in December, 2006, on the birthday of Sonia Gandhi, the then Prime Minister, Dr. Manmohan Singh, shocked the Hindus by pronouncing that Muslims and minorities will have the first claims on the resources of India. Apparently that policy directive to glorify the Muslims and run down the Hindus had already been handed down to the helmsmen of NCERT for implementation. And they did it with a vengeance!

The authors have quoted innumerable instances of the gross distortions introduced in the school text books by deliberately excising the key words from the quotations of well-known Indic historians and exponents of Indian culture. Among various distortions the most laughable is the attempt of the secularism-doped NCERT to conceal the truthful account of Aurangzeb’s barbaric rule highlighted in his book by French traveler Francois Bernier who had been a physician in the court of Aurangzeb. Similarly “obnoxious” is the word which comes to mind when one sees the attempt to misinterpret and denigrate the Manusmriti and the Vedas in the NCERT text books. A sinister attempt has been made by NCERT to paint the ancient Hindu scriptures as grossly hostile to the emancipation of women. Their devious attempt to pour scorn on the Brahmin community by distorting the contents of Hindu scriptures shows the NCERT scholars in poor light.

In all fairness, in the school text books, the custom of Sati should have been rebutted by quoting Shloka X.18.8 of the Rig Veda which advises a Hindu widow to return alive to her children and approved her right to have a new husband [1]. Also, the right of a Hindu wife to own her matrimonial home enshrined in Richas X.18.8 and X.85.42, which is reconfirmed in another marriage Richa should have found mention in school text books as well [2]. Prima facie these undeniable truths enshrined in Rig Veda have been deliberately excluded from the NCERT text books in a clumsy bid to misinform the children.

Surprisingly no importance is given in the school books to the absence of institutional slavery among the Hindus of India – a fact testified by Megasthenese in his tome ‘Indica’. Most surprising indeed is the absence of any reference in the text books to the evil of slavery promoted and nurtured by Muslim rulers, especially the incessant capturing and selling of Hindu women, regularly practiced by Muslim rulers. Again, there is a deliberate attempt to conceal the prevalence of evil practices like triple talaq, halala and polygamy among the Muslims.

In the context of Mughal tyranny, the NCERT books deliberately omit the contents of the warrior saint Guru Gobind Singh’s letter to Aurangzeb warning him that “when all other means have proven ineffective, it is right to take up the sword” for fighting the forces of evil. It was a historic letter and a bold decision, which changed the course of Indian history. Yet it was deliberately omitted from the books prescribed for the school children. Distorting truth has been practiced with impunity for decades by the left-oriented top brass of NCERT.

For instance, in a text book prescribed by the NCERT, before the NDA came to power in 1999, the Sikh Guru Tegh Bahadur was insulted by describing him as a ‘plunderer’ on the basis of a book written by Satish Chandra – a rabid Marxist historian. The wanton mischief was undone only when in 2001, a member of the Delhi State legislature objected to the derogatory reference to the epitome of spirituality and valour, the great Guru who was known as ‘Hind ki Chadar’ for protecting the oppressed and the weak. Unfortunately no action was taken against the NCERT functionaries responsible for using the demeaning language against Guru Tech Bahadur.

It is a pity that the falsehood spewing text books foisted on school children during Dr. Manmohan Singh’s ‘Muslims First’ regime are still being used even now. Here it will be pertinent to quote Rudyard Kipling’s grim prophesy about the consequences of negating the ancient heritage of a nation: “When a land rejects her legends, sees but falsehood in the past: And its people view their Sires in the light of fools and liars, it is a sign of its decline and its glories cannot last. Branches that but blight their roots yield no sap for a lasting fruit”.

It is time to listen to Kipling’s voice of reason. The real tragedy, however, is that many scholars and historians who have contributed to the substantial gibberish incorporated in school text books happen to be Hindus – one might as well call them anti-Hindus.

Sita Ram Goel in his book, ‘Hindu Temples What Happened To Them’ has drawn attention to the observations of H.M. Elliot about the slavish mentality of Hindu writers and historians whom the latter called ‘slavish crew’. Goel poignantly observes that this tribe of ‘Hindu munshis’, or the slavish crew of Elliot, have a long life and shows a remarkable continuity. Instead of diminishing in number, they have multiplied with time. Today, they dominate the universities, the media and the country’s political thinking, wrote the noted Indologist.

The book, ‘Brainwashed Republic’, is a must read for every Indian for making an objective assessment of the damage done to our educational system by the slavish manipulators of our culture and history embedded in NCERT. It is time to get rid of them and revamp and reorient the organization.