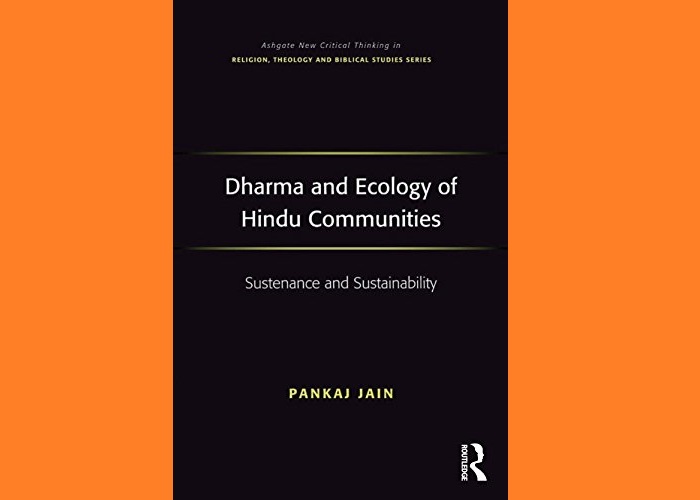 Dharma and Ecology of Hindu Communities: Sustenance and Sustainability by Dr. Pankaj Jain can be purchased in India here.

Human-Nature dualism has always been a debatable question in the East and West. Professor Pankaj Jain’s “Dharmic Ecology” is a synthetic approach of ethics and Hindu religion.  His work critically analyses different dualistic approaches like human and nature, bio-divinity and bio-diversity, the global English speaking India and the rural vernacular India and thereafter, provides one unified holistic approach to resolve these dichotomies while attaining sustainability. The natural environment (trees, mountains, rivers, etc) are worshiped in Indian culture, but this has not changed the attitude of growing population and their thirst for economic growth. Even though the literature on Hinduism and Environment is vast and are still baffling, however, Professor Jain’s work on Dharma and Ecology of Hindu Communities: Sustenance and Sustainability has a unique contribution to this field. In order to understand the paradox of human and nature relationship, he has justified a holistic dharmic ecological attitude which is not against any established religion or culture rather he has given a unique and authentic justification on the Indic culture and its contributions towards sustainability. While representing the Indic Dharmic culture, he has also critically remarked on the attitudes of the global English speaking India.

On one hand, many scholars have criticized the western religions for exaggerating many environmental problems such as deforestation, population explosion, pollution, global warming, etc. meanwhile lauded the eastern ones for being helpful in preserving and protecting the nature. In contrast, some of them have considered the eastern religions as unscientific and mythical. However, Professor Jain asserts that each religion has some unique ways to be pondered upon in order to safeguard the nature, thus emphasizing that religions can play an important role in addressing the modern ecological issues. In this book, the author focuses on the prospects of eastern traditions and communities, especially those prevailing in India to sustain the ecology. In particular, two antithetical models namely ‘devotional’ and ‘renouncer’ models related to environmental preservation in India have been discussed in Chapter 2. Although having disparate ideologies as well as certain lacunae, both these models share the common objective to mitigate the environmental problems. By the study of different communities in India, the author finds that the former model is more rational and hence more reliable in the modern world as compared to the latter one in solving the environmental issues. However, he realizes the need of a unifying model which constitutes the essence of both the aforementioned models to conserve the nature. Later in this chapter, the author reviews the work of Emma Tomalin in which she has questioned the role of Hindu religion in environmentalism. Though Professor Jain disagrees with her assertion claiming that “religious environmentalism offers an interpretation of tradition and not a traditional interpretation”, he concurs with her notion of ‘bio-divinity’ which emphasizes that the environmentalism in Indian communities is not directly connected with the modern ecological problems rather it is merely inspired by the traditional and religious teaching and guidance to practice ‘dharma’.

Professor Jain tries to explore whether ‘religion’ and ‘ecology’ are two distinct notions in traditional Indian communities or they are indistinguishable. He primarily focuses on three communities: the Swadhyaya community conceived in the mid-twentieth century in Gujarat, the Bishnoi Community and the Bhils both of which emerged in the medieval times in Rajasthan in three different chapters. Chapter 3 is devoted to the study of one of the least known “New Religious Movement (NRM)” in the modern era, called the Swadhyaya movement founded by Pandurang Shastri Athavale with a motive to spread the doctrine of “Indwelling God” which eventually connected ecology with dharma. While practicing Swadhyaya, basically devotion oriented which included certain aspects of Christianity and Islam along with Hinduism, people did not require to change their religion and thus it gained tremendous popularity in the states of Gujarat and Maharashtra, unlike other NRMs of the western countries which faced criticism on account of their rebellious qualities. Using spirituality and divinity, Athavale created environmental awareness among the masses and motivated them to accept the entire universe as a family (Vasudhaiva Kutumbakam). This ideology was independent from both shallow ecology which aims to protect the nature for the needs of human, as well as deep ecology which entitles superiority to nature over humans. Athavale continued his efforts of spreading devotion by establishing various tree-temples and promoting socio-economic experiments, considering divine powers in trees and other natural resources, but he didn’t referred them as environmental reforms.

In Chapter 4, Professor Jain has taken the case of Bishnoi community of Rajasthan in the quest of influence behind the ecological activities of different caste-groups in India. The Bishnoi community, founded by Guru Jambhesvara, has been put into different categories by different authors. While one section considers them as followers of Hindu God Vishnu, another group of authors categorize them as Muslims. This is due to the fact that the beliefs of Bishnois resemble to those of both Hinduism and Islam. However, most of the people, including the Bishnois themselves, claim that the name “Bishnoi” has been derived from the words bish (Twenty) and noi (Nine) which corresponds to the twenty-nine rules laid by their spiritual leader Jambhesvara. In this chapter, the main focus of the author is to explore the motive behind the sacrifice of lives by 363 Bishnois at Khejadali village in the year 1730, in order to protect the khejari trees which provide fodder, protein-rich legumes and timber and thus essentially contributing in the sustenance of both animals and humans in the desert area of Rajasthan. By citing several instances of environmental activities of Bishnois and by translating the sabdas of Guru Jambhesvara, the author concludes that the connections of the aforesaid community with ecology is not merely based upon ‘Brahminical Hinduism’ rather ‘dharma’, i.e., the amalgamation of morality, ethics and spirituality has a tremendous influence in the conservation and sustenance of ecology. Moreover, he emphasizes that contrary to the opinion of deep ecologists who consider humans as just a creature in ecology and renders their intervention in the ecological system as harmful for its conservation, the eastern traditions follow anthropocentrism by providing superior status to humans in the preservation of ecology. Citing the example of Bishnoi community, Professor Jain argues that human intervention can be rightfully accepted for sustenance of ecology.

In an endeavor to complete his quest, Professor Jain takes the case study of the Bhil community, the largest caste-group of Rajasthan constituting 39 percent of its population and the third largest in India, in Chapter 5. The Bhil community, which derives its name from the Dravidian word Bhil meaning bow, excels in archery and is regarded as the aborigines of Rajasthan residing in the Aravallis. They have played a crucial role in protection of sacred groves, known by various names such as deora, malvan, mandir van, oran, bagh, in Southern Rajasthan. Based on some recent literature reviews on the sacred groves as well as on his own field work in the district of Banswara and Dungarpur in Southern Rajasthan, the author finds a striking difference between the ecological activities of the Bishnoi and the Bhil community. While, the Bishnois actively participate in sustaining the ecology regardless of their location, the interaction and protection of the natural resources by Bhils are based purely on the faith of the deities surrounding them and confined only to their sacred areas. By visiting the sacred groves of Rajasthan, the author analyzed that the presence of temples of different Hindu deities such as Durga, Siva and Hanuman in the groves is the primary and sole reason behind the conservation of these groves. Furthermore, some of the government efforts like Aravalli Sacred Grove Conservation Campaign and government managed environmental projects such as Sitamata Wildlife Sanctuary and Tal Chhapar Sanctuary are also based on the faith of Bhils in order to restore the sacred groves and protect the flora and fauna of the ecological system.

Chapter 6 deals with the comparison of ecological attitudes of the ethnic Indian traditions with the organizations working in the Western countries, such as ‘GreenFaith’ in New Jersey and the Roman Catholic Church, which have an analogous motive of using spirituality to conserve the nature. Professor Jain also cites examples of several modern Indian organizations like ‘ISKON’, ‘Rama Krishna Mission’, ‘Art of Living’, ‘All India Movement for Seva’, ‘GreenFriends’, ‘Gayatri Parivar’, the ‘Sacred Gift’ in Odisha and various other Jain organizations to elucidate their continuous strive in order to solve the modern ecological issues in different ways. The author asserts that the foremost inspiration behind the ecological reforms by these organizations is largely based upon their awareness of environmental problems rather than pure spirituality and religiosity. Based on his case studies, Jain strongly disagrees with the claims of authors Frederique Apffel-Marglin and Pramod Parajuli which rejects the role of Hinduism and other religions in solving contemporary environment problems. In fact, he argues that the inclusion of dharma, which constitutes duty as well as ethics in addition to religion, can contribute voluminously in providing ecological justice.

The author has clearly mentioned in Chapter 7 that the ‘dharma’ is a key concept in the Indic traditions. However, due to the English semantic rules, many western thinkers have misunderstood ‘dharma’ as merely the “Hindu Religion”. While addressing the western critiques, the author argues that dharma is discussed as the cosmic law which sustains the systematic order (both individual and natural) in different schools of Indian Philosophy.  In Vedas, pṛthivim dharmaṇā dhṛtam signifies dharma as sustainer of the earth. Irrespective of the diversities (Hindus, Jains, Budhhas, and Sikhs) of Hindu traditions, dharma represents one unified sanatana dharma. The author mentions that in and after the Islamic invasions the meaning of dharma has changed from Hindu dharma to Hindu religion. The ethical, spiritual and eternal sanctity of the word dharma and its holistic significance is a remarkable contribution of the author to the field of ecological sustainability.  Austin Creel, negatively questioned about the contribution of Indian culture towards the development of environmental ethical theories like the western scholars did. He also asserted that Indian Philosophers are more inclined towards mokṣa but not towards the dharma (ecological sustainability).  In response, the author cited the logic of Dharma: the Hindu Ethics as a “holistic virtue ethics” for the modern world through different Indian epic heroes and their inherited qualities by the three vernacular representatives (the Bhils, Bishnois, Swadhyayas)  who transcends the duality of dharma and mokṣa.