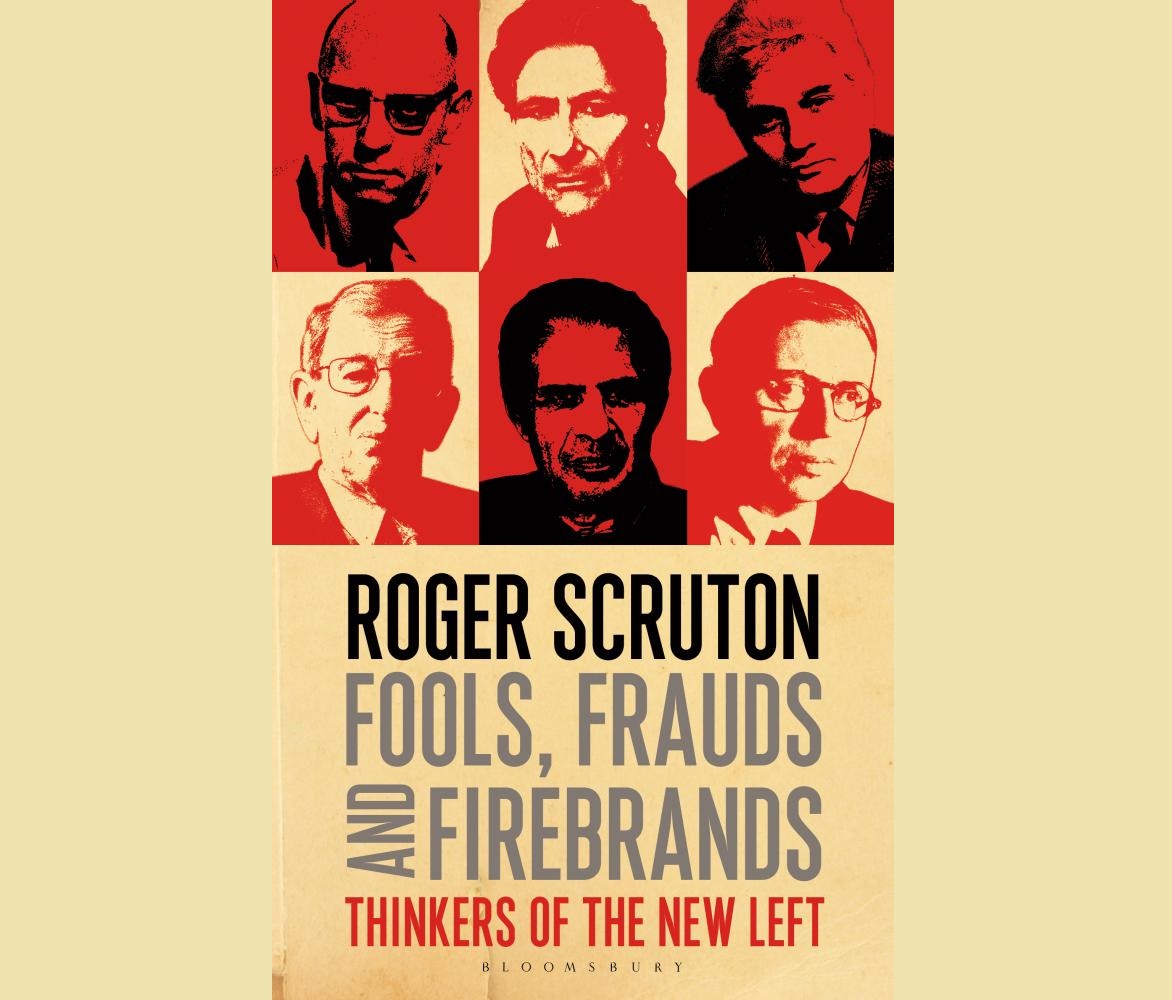 Fools, Frauds and Firebrands: Thinkers of the New Left by Roger Scruton can be purchased from Amazon.

The left brand of philosophy can be very obscure and is subjected to random interpretation depending on the issue and the situation. The language sometimes is dense, sometimes very dense, and often very, very dense; and hence, an ordinary man perhaps cannot understand them. This is often used as an advantage by the leftists to bludgeon critics and opposition into silence. Roger Scruton has written a fantastic book called, ‘Fools, Frauds, and Firebrands’, where he carefully deconstructs the New Left thinkers across Europe, England, and the USA in an emphatic manner. He is a conservative and a contemporary philosopher, and a quite popular one too. He is a prolific writer on a variety of subjects. The viciousness with which he takes the leftist philosophy apart is matched perhaps by the viciousness of the left thinkers. At some places, the language construction ascends into the stratosphere and the vicious humor leaves one stunned.

The Left thinkers have been playing around for too long, but have influenced the academia all around the world in what could be a permanent damage. They need to be weeded out slowly, says the author in strong words. The problem with the Left thinkers is that every aspect of history, social, economic, legal, and civic life is explained by them in terms of class struggles. They talk about revolutions against any existing system in a language which is very dense and opaque. Some of the thinkers would even clothe their theories in a pseudo-mathematical language and at the end of certain passages, one surely feels that there is a lot of mumbo-jumbo in their thinking. The revolutions are not given their logical ending with a clear enunciation of the alternatives. The alternatives, in fact, are never actually spelled out and when the realities of the alternative do come up in the form of the Bolsheviks like Stalin and Lenin; or the Chinese like Mao, there is a pregnant silence. The brutality of these people’s rule has been as bad, if not more, as the pre-existing so called bourgeois rule.

Marxist history is a history of fitting data to suit ideology. There is a complex connection between social and economic life, but it is difficult to say which one the cause and which one the effect is, says the author. Marxist history is less an explanation than a shift of emphasis. Where others may study law, religion, art, and family life, Marxist studies focuses on the material realities like production of food, houses, machinery, furniture, and the means of transport. A selective study, which is often carried out by the Marxists, can conclude that production of material goods is the real motor of social change. It falls short of a causal explanation, says the author, but becomes a misleading account of modern history, in which legal and political innovation has been often the cause of economic change rather than an effect.

Marxist interpretation of any history is in terms of class struggles between the bourgeoisie and the proletariat, one controlling the means of production, and other in control of the labor, which makes the production possible. The paradigm of exploiter and exploited would be the only theme in explaining any political, social, and economic turmoil. In India too, the Aryan-Dravidian conflict is the product of such a reading of history. The contest of material forces becomes the cause of everything. The major art of the leftist thinkers has been to create ‘isms’ of the weirdest kind and throw abuses on anyone whom they think is on the right of the things. The abuse and vindictive language just by repetition becomes a standard for answering any kind of questions. As the author succinctly puts, “Marxist history means rewriting history with class at the top of the agenda. And it involves demonizing the upper class and romanticizing the lower.” And class is elevated to science, and the nation becomes ideology. “Nation and traditions is a mask drawn across the social world by the bourgeois need to misperceive it” is the typical left thinking; which the author disagrees with strongly. The author is rather unsparing in his criticism of the left thinkers.

In different countries, the left has had a different agenda. In America, its agenda has been against consumerism, a pathological form of democracy. The Left sometimes champions the cause of gay rights, sometimes human rights, sometimes against consumerism, but they always have a reason to fight and call for a revolution overthrowing the present, but without spelling the alternatives, which would be worse than the present, as could be seen from the example of Soviet and China.

He then says about a prominent left thinker, Dworkin, that “His argument implies that the right to speech exists in order to protect the dignity of the dissenters. It is remarkable for its covert conclusion: the more silent and the more law-abiding your activities, the less you may protest against the provocative utterances of those who don’t care a fig about your values. The voice of dissent is the voice of the hero; it is for his sake that the constitution was designed. The essay (of Dworkin) advances in that way to the conclusion that any government’s harsh treatment of civil disobedience, or campaign against vocal protest, may be thought to count against its sincerity. In other words, a truly sincere government, after having passed a law, will be lenient towards those who disobey it.” Now, we know where the Indian left intellectuals, media, and people like Kanhaiya Kumar get their inspiration from.
The left intellectuals have been thoroughly dishonest in representing the view of the down-trodden and their agenda has not considered human nature at all in the scheme of their political theories and ideology. It is not always the power, which moves things. Love, religion, and spirituality has great influence on human minds and actions, yet they have no place in Leftist conception of society

The book is wonderful in its expose of many of the greatest Left wing thinkers of the world. India is not on the author’s radar, but I would be personally interested in what he would be saying about them. Arun Shourie has made a thorough expose of them in his books, however. I would be also keen on what the author, as a conservative British, thinks about the brutal colonial exploitation of India by the British. He is a philosopher, and does seems to know a bit about Islam. Unfortunately, like all other Western philosophers, he has no clue about Indian philosophy and Vedanta. Non-dualism and the spiritual traditions of India with its deeper material ramifications and societal organizations does not find a place in the book. Maybe, it is not relevant, or maybe he is unaware. It is a highly-recommended book and a great ammunition to fight the highly distorted intellectual bullets of the left.

Dr Pingali Gopal is a Paediatric and Neonatal Surgeon practising in Warangal, Telangana. He has a keen interest in Indian culture and does his little bit to correct the many wrong narratives which hurt India at many levels. Opening his eyes rather late to the wonder called India, it is now a continuous journey for him to sip bits from the oceanic nectar of Indic Knowledge Systems.