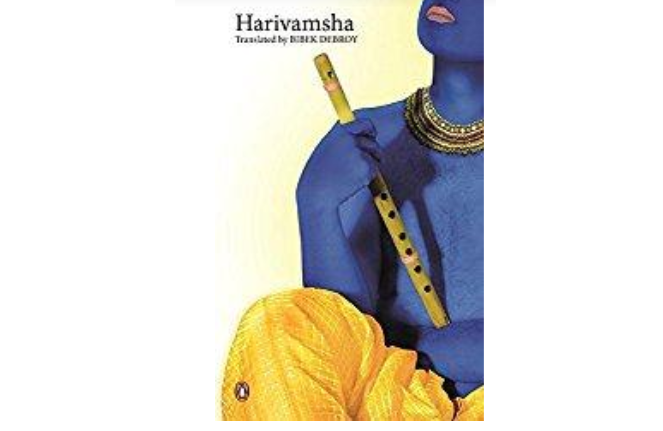 If you have read the unabridged Mahabharata (I have read Dr. Debroy’s English translation, not the original Sanskrit), you will find the Harivamsha to be different. For one, its narrative has more in common with a Purana than the Mahabharata. Part of this is by design, since as Dr. Debroy informs us, for a Purana to be classified as such, it had to cover five topics – “the “original creation”, the periodic cycles of secondary creation and destruction, the genealogies of gods and the rishis, the eras, and the solar and lunar dynasties.” And that is what you get – especially detailed accounts of genealogies. For example, chapter 8 tells us the story of Martanda and Yamuna, chapter 9 of the Ikshvaku dynasty, chapter 10 of the Raghu dynasty, chapter 11 of the ancestors of Bhishma and Shantanu, and so on. There is also some repetition to be found, but with slight variations – chapter 22 tells us the story of Yayati, but the curses are slightly different. Another difference is the absence of philosophy that otherwise abounds in the main epic.

As is the case with the rest of the Mahabharata, the narration narrows to the main events, but in its own way, taking its own time. Harivamsha is no different. After talking about the births of gods and genealogies of various dynasties, including the Raghu vamsha, the plot turns to the births of the Kauravas and Pandavas. It is there that we are told that the city of Mathura was constructed by Shatrughna (Rama’s younger brother), and that the son of its ruler at the time – Ugrasena – was none other than a daitya named Kalanemi, who had taken birth in the form of Kamsa! Or that Hayagriva, another demon killed by Vishnu, had taken rebirth as Keshi. Or that Arishta was Bali’s son. Or that the mighty wrestlers Chanura and Mushtika were the two danavas, Varaha and Kishora. It was at Narada’s urging that Vishnu agreed to take birth on earth. But, before he would take birth on earth, Vishnu approached Brahma to ask him who he would have to slay in battle, where he would be born, where he would reside, and even what he would wear! As is to be found in the rest of the Mahabharata, there are causes – boons and curses – that are used often to explain events. So, we come to learn that the sage Kashyapa had been cursed to be born as a cowherd – punishment for stealing cows – and would be born as Vasudeva; and Aditi and Surabhi would follow him to be born as Devaki and Rohini.

When Arjuna describes the greatness of Krishna (chapters 102, 103, 104), he describes an incident where a brahmana’s children were dying almost immediately after birth. Three had died, and the fourth was about to be born. The brahmana approached Arjuna, who agreed to help him, but to no avail. The fourth child vanished as soon as he was born, despite Arjuna’s best efforts. Krishna then intervened, and located and rescued not only the fourth child, who had vanished, but also the previous three children of the brahmana. When Arjuna asked Krishna to explain how he was able to “stupefy the ocean” and “create a path through the mountains“, Krishna responded with what reads like a miniaturized Gita – “You should know that the mass of energy is me. I am the stupefied water of the ocean. I am the one who stupefied the water. I am the seven mountains that were progressively seen by you. … I am the destiny of all creatures. I am spoken of as dharma. The four varnas have originated from me and so have the four ashrams.”

We all know Rukmi as Rukmini’s brother. The warrior, who lost to Krishna in a battle, and as a result of having lost his pledge, never again lived in the Vidarbha city of Kundina. Rukmi, the great warrior, who did not fight the great war at Kurukshetra. Chapter 89 tells us of another great gambling match, this time between Rukmi and Balarama, in Dwarka. It tells us about a warrior skilled in gambling, of a warrior unskilled in gambling, of stakes in the game of dice, and a gory end. History does seem to repeat in the great itihasa, but with a twist every single time.

In the same vein of events recurring in the Mahabharata, you have the theme of sacrifices never ending the way their organizers planned. If it was Yudhishthira’s Rajsuya yagya ending with the death of Shishupala at the hands of Krishna, you had the Ashwamedha yagya at the end of the war, ending with the appearance of a half-golden mongoose, who dismissed the sacrifice as “in no way comparable to the one that involved the giving away of one prastha of saktu.” The Mahabharata begins with Janamejaya’s Sarpa Satra (snake sacrifice) ending before its completion. Harivamsha ends with an Ashwamedha yagya (horse sacrifice), but which itself ends with an end being pronounced on all horse sacrifices!

In some ways, Harivamsha is perhaps the first instance of a sequel. Written after the Mahabharata was composed, it sought to fill what would have been a much-perceived need to have a text on the life of Krishna. Krishna as a character makes his appearance in the Mahabharata only at the time of Droupadi’s swayamvar. There is nothing about Krishna’s birth, childhood, or exploits outside of his interactions with the Pandavas. Harivamsha fulfilled that gap. And like all good sequels, how does the Harivamsha end? Souti asks Janamejaya – “What else do you desire that I should speak to you about?”

Thus, was set the stage for the Puranas?