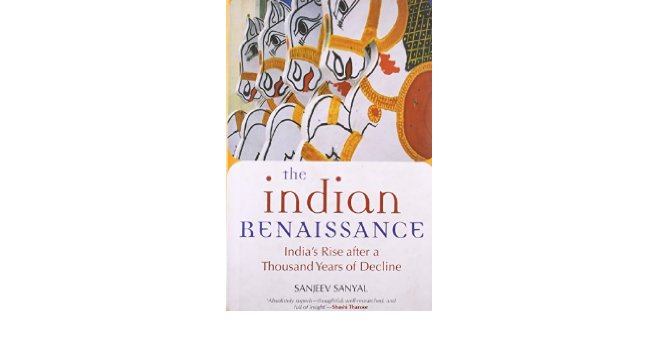 The Indian Rennaissance: India’s Rise after a Thousand Years of Decline by Sanjeev Sanyal is available both in paperback and hardcover.

The book by Sanjeev Sanyal called ‘The Indian Renaissance’ is truly inspiring. India had a very chequered history since ancient times. We had a rich culture and economy, but that painfully declined with the constant invasions. Before Christ, India goes back at least a good 4000 years. Our philosophy predates the Greeks by few thousand years. It is not that we were purely religious in our outlook. Instead, even the secular studies in India in the field of science, astronomy, metallurgy, was equally spectacular.

Angus Maddison has researched into the history of world economics and it is an accepted fact that India was contributing to almost 35-40% of the world GDP consistently from the beginning of the common era to the 17th century when the Britishers or rather the East India Company landed. Even the Islamic invasions did not dent the strength of the Indian economy. Along with China, India was contributing more than 50% of the world’s GDP. There is no controversy regarding these figures, but unfortunately, these figures and facts are rarely mentioned in the history which is taught to our students. It is telling that UK had a contribution of only 4% of the world GDP during the 18th century, which swelled to 30% at the time of our independence while we were reduced to a pathetic 2%.

It was the biggest loot and plunder of our times and the amount of money which was taken from India during this period of 150 years in today’s money is about 10 trillion dollars. So much about the romantics who think that the British rule was great for India. The author however says that the degeneration started about some 1000 years back with the beginning of the Islamic invasions. A civilization remains alive and throbbing if it constantly looks outwards. India was a great sea-faring nation since times immemorial. The land and the sea trade made it a very prosperous nation. However, the docility of Indian culture and its people allowed invaders and colonials to plundering this peaceful country. In any case, about a 1000 years back, when the Islamic invaders started to plunder and occupy the country, India stopped looking outwards and instead turned inwards. It became a closed society and stagnated.

And then, in 1947, when Indians finally regained independence, we were left desperate and poor by the ravages of the colonial rule and loot. It was a great opportunity, which was totally bungled. The model termed as Nehru-Mahalanobis model of economics that was based on 5 year plans was adopted. It did not encourage the private sector at all. Another major area we became deficient was primary education. We peculiarly invested in tertiary education like the IITs, IIMs, and other higher studies, which left us with a very educated group of middle class people but without employment. This had very important implications for our economic trajectory. The government controls were vicious; and the economy hugely stagnated instead of revving up. We ran into huge international debts with no way of recovery. Then came the truly most important event of independent India, when the combine of PV Narasimha Rao and Manmohan Singh started the process of liberalization in 1991. That was a huge moment and the importance of this event has been clearly emphasised in the book.

Sanjeev then writes very impressively on the great Indian middle class and its evolution. Most industrialization produces a middle class which becomes strong gradually- politically and socially. The middle class of Western countries was in place by the 19th and 20th century. However, in India, there was already an educated middle class at the time of liberalization which spurred a growth in the service industry. The economic growth after that was almost exclusively in the service industry. Call-centres is one of the primary examples. The service industry includes communications, outsourcing, transport, tourism, hotels and so on. There was this huge spur in the service industry which was a different trajectory from the rest of Asia, who were more into heavy industry. Heavy industry requires capital and labour, and we were grossly deficient in the former. The country made the error of solely concentrating on higher education, ignoring the primary education. This policy led to the creation of an unemployed middle class, many of whom migrated to greener pastures. A massive brain-drain happened in our country. After 1991, the process is now slowing down. In fact, it may be reversing too, though in a small amount.

He then writes very excitedly about the major population or demographic changes which are going to take place in the next few decades. This is the story of immense hope for the country. The most important demographic change in the next 20-30 years is that our average age will be in the 30’s. That is going to be a huge advantage to India. Every country goes through 3 phases as far as demographics are concerned. In the first phase, there is a high birth rate and a death rate. In the second phase, the young working group forming the major labour force becomes prominent. In the final phase, the old people would increase and the average population age increases. The last has happened to most western countries and is soon going to happen to the Asian giants like China and South Korea. The ageing population affects the economy of the nation in a big way with loss of productivity and increasing healthcare costs. Primary education has come back as a big force in the country; and when this is combined with the demographics in the next two decades, our country is poised for a huge leap in the infrastructure and heavy industrialization. We are going to run into a shortage of the work force, he predicts. Foreign workers might be engaged to augment our workforce. Our engineers are in for some good times in the future.  Urbanization will increase and the high rural population presently comprising 70% of our country will reduce. There are other economic aspects described in a very racy manner like how we are now in capital excess. Our gold reserves have exceeded our debts and the capital is no longer deficient, something which was sadly our story for almost 5 decades after the independence. The book is of great hope as we look forward to a huge increase in our prosperity and economic progress.

There is everything positive going for our country now in terms of education and demographics and we should not bungle it up. He calls for a major reform in our archaic and stifling laws; and for decrease in the corruption. The cities should be prepared for the massive urbanization, industrialization, and infrastructural issues. Bangalore and Kolkata, he cites as two examples as how cities should not be planned. Gurgaon expanded randomly without an infrastructure in place. The caution is well placed and meaningful. The author is very authentic in his information and statistics and reads in a very easy and clear manner. At no point, does one feel that something romantic is being dished out to us. This book should be a must read for all Indians, especially the youth to truly get inspired and understand our country’s economy in great depth.