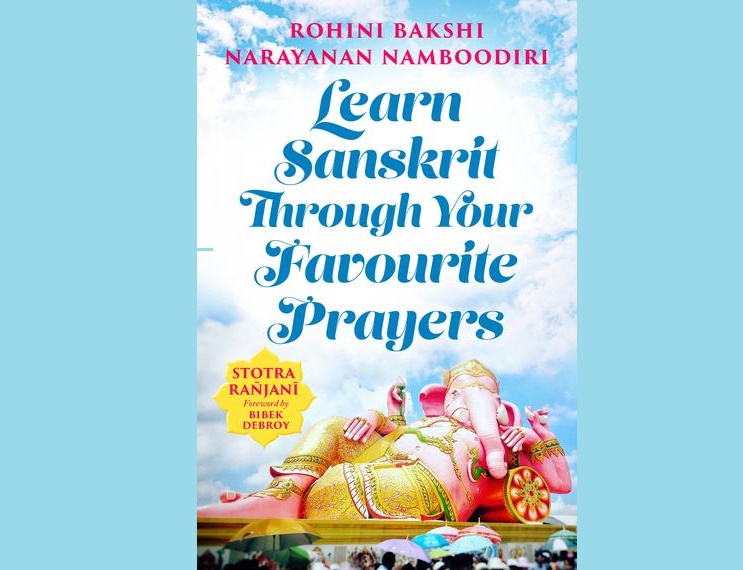 Recently, while sifting through my hoard of Sanskrit books, my grandfather suddenly burst into a recitation of the amarakośa, shooting off half a dozen verses from the kāla-varga, while I watched incredulously. It turned out that he spent a few years of his childhood enrolled in a traditional pāṭhaśālā, before he abandoned it for a regular education. He no longer remembers any grammar, but Sanskrit verse is harder to wash out than that. The last time he recited those verses was over eighty years ago, but they stubbornly cling on, like wet sand, difficult even for a fading memory to shake off. He also has a good number of stotra-kāvyas at his memory’s call. “Though I don’t know the language, these verses make me feel connected with the language on some level,” he adds as a preface to a lament for having abandoned Sanskrit in his youth.

It is a good observation. Indeed, the average Hindu’s most immediate connection to Sanskrit are the verses in his memory. Even the young urban Anglophone would not have resisted absorbing a dozen prayers by the age of sixteen, even if only passively. Consequently, it is not surprising that students of Sanskrit are most often people whose motivation is to understand their prayers and sacred texts in the original.

They perhaps form the largest chunk of the pool of potential Sanskrit students. A visit to any Sanskrit evening college will confirm this. Samskrita Bharati understood this some years ago, and launched a Learn-Sanskrit-through-the-Bhagavad-Gita programme (Gītā-Śikṣana) across India. It was a runaway success. Even for those indifferent to religion, simple stotras can be a good medium for learning. The vocabulary and the tropes would be familiar to Hindus, allowing the brain to fire on all cylinders for grammar acquisition. In short, stotras can be used as effective pedagogical devices. This is what Rohini Bakshi and Narayanan Namboodiri have set out to do in their new book “Learn Sanskrit Through Your Favorite Prayers.”

This weighty tome, over five hundred pages long, features eleven popular prayers, each explained and chopped down to the minutiae. The book is bilingual with an explanation in Sanskrit on the left page and the same explanation in English on the right page. The explanation in Sanskrit is in Devanagari, while the explanation in English uses IAST for Sanskrit words. Every prayer is preceded by a small introduction that mentions, amongst other things, the author, the meter, and the benefits of reading the prayer. The book resembles a traditional commentary (vyākhyāna) on the stotras, since it follows the same method for explaining verses. The explanation provides the padaccheda (word-division), the padaparicaya (word meanings), the anvaya (logical word order) and a prose translation for each verse. For instance, consider this line from the Gaṇeśa Pañcaratnam:

First, the words are separated:

This has been done very meticulously for each verse. There is also a useful appendix with Hindi translations of all the prayers. However, it should also be clear to the percipient reader that one cannot actually learn Sanskrit from scratch through the book. The title of the book is to be taken with a pinch of salt. Though the book promises “engagement with beginners at various levels,” you need to have already put in many hours of toil learning the grammatical framework of the language to be able to use it. However, if you’ve done that, you are probably capable of reading with a dictionary, or at least using traditional commentaries. A situation approaching that of Haradatta Miśra’s Padamañjari—

Stotras are also often liberally embellished with auditory devices like alliterations and extended rhymes (yamaka). This constraint on the poet manifests as an additional layer of complexity in the vocabulary and syntax, making them unsuitable for beginners. Many (but not all) of the stotras in the book are of this nature. Beginners trying to wrestle with expressions like svatīrthamṛdbhasmabhṛtāṅgabhājāṃ (Vaidyanāthāṣṭakam) will end up reinforcing the notion that Sanskrit is a “code” to be cracked rather than a language to be read. This is not just opinion. Studies in language acquisition have shown that copious reading of texts with gradually increasing levels of difficulty is the correct way to acquire a language.

Devotees need not mistake me by my criticism for Bilhaṇa’s camel that enters an orchard and forages for thorns. I understand that prayer affords many the motivation that they otherwise find elusive. Also, not everyone is trying to learn Sanskrit to be able to read independently. Many are satisfied knowing the meaning of the prayer and the word-by-word meaning, while still nurturing hopes of learning Sanskrit at some point. This book is an excellent resource for such an audience, inspiring and helping them at all levels, while their knowledge of Sanskrit slowly matures. As Chamu Krishnashastry writes in one of this essays, Sanskrit lives today through the strength of popular sentiment (anurāga-bala), and not through strength in numbers (saṅkhyā-bala). Efforts like “Learn Sanskrit Through Your Favorite Prayers” go a long way in shifting the balance to the other side. I hope it finds a place on every devotee’s bookshelf.

Learn Sanskrit Through Your Favourite Prayers – Stotra Ranjani by Rohini Bakshi and Narayanan Namboodiri is available in bookstores, on Juggernaut and on Amazon.