A brief study of possession in Hinduism-I: Introduction 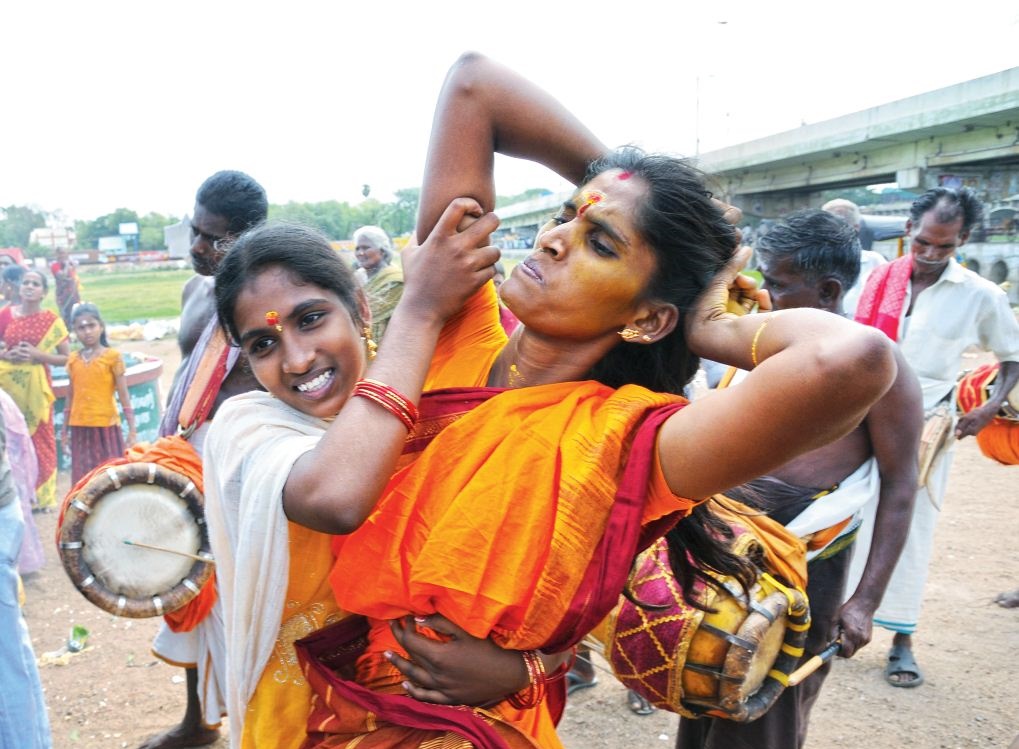 The English word possession and spirits when taken together have come to indicate a certain unfriendly, disturbing, yet exotic area of life whose detailed knowledge, though scanty or rare, is nevertheless peppered with an element of a peculiar, and unknown attraction which is common about things liminal to our daily existence. This view gets augmented no less by the influence of anecdotal stories – who does not have that one friend, who has seen/felt/heard of a ghost? – Or the Hollywood horror flicks like “The Exorcist”, or “The Exorcism of Emily Rose” and their undeniable influence on public consciousness. The standard dictionary meaning of the word “possession” is the state of having, owning, or controlling something. The Merriam Webster adds one more definition, which is of interest to us: a psychological state in which an individual’s normal personality is replaced by another. This is the sense in which the word is used when applied in the context of spirits or discarnate and demonic entities. The question, however, is whether this is how Sanatana Dharma too looked at the phenomenon of possession. Moreover, what is the language used to describe possession states in Saṃskṛtā literature, and what role, if any, does it play in shaping our understanding of the spiritual process? In this essay we shall try and take an objective look at this non-mainstream yet pervasive phenomenon.

Professor Frederick Smith in his excellent book, “Deity and Spirit Possession in South Asia” observes that “the non or scant recognition of possession in premodern India has been due to a long standing aversion among educated Judeo-Christians as well as educated Hindus, for whom possession has fallen outside the realm of both reason and social accountability.” Indeed the most trenchant idea that possession is associated with negativity, or spiritual and physical debilitation is more of a Western viewpoint where the fulcrum of theology revolves around a reductionist dichotomy between God and Satan. If not God, or sanctioned by what is acceptable to their worldview, it must necessarily be the work of the Satan. Apart from the deleterious effects this us-vs-them view has had on world cultures, it also left an absurdly lopsided effect, antithetical to our original ideas, on the sharpest Hindu minds about the nature, scope and purpose of possession in a ritual context, or even in accidental cases.

Early studies of possession cases were mostly Eurocentric and influenced by the underlying Judeo-Christian worldview, “insofar as it tried to explain descriptive data collected in non-Western cultures by Western scientific theories, ignoring the non-Western folk systems of explanation” [Jilek, 1971]. Recently, however, there has been a change in the analytical model of anthropological studies with many questioning the researcher’s presumed superior understanding of these phenomena – superior, that is, to the understanding of the people under study. [E. Turner].

Before we go looking into the texts, one of the most natural challenges that come up when mentioning possession, and mostly from educated urban folks, is that these are ancient, illiterate ways to explain all that was beyond our understanding at a medieval period of human society. Today, as psychology, psychiatry and neuroscience has advanced dramatically over the last century with a better understanding of dissociative mental disorders like multiple personality disorders, or schizophrenia, or other mental illnesses, we can therefore bracket all such ideas of possession as ancient superstition or blabbering of the unwashed masses. Beyond the obvious garbage of pop-psychiatry/psychology (everyone today seems to know the field without having formally studied), and terrifying one-size-fits-all misapplication of outdated tools like Freud’s psychoanalysis onto everything from saints to toothbrushes, and though psychiatry or psychology are still toddlers in their own field compared to physics, chemistry or botany – the real sciences – yet an objective study of the recent developments show that psychiatrists, or at least some of them, are opening up to the idea that a human being’s personal complexity leaves us with many wide gaps in our understanding of altered states of personality. For example the latest version of the Diagnostic and Statistical Manual of Mental Disorder (DSM) published by the American Psychiatric Association, updated in 1994, dropped the category of hysteria, which served as the bedrock of Freud’s view of possession, and suggested, a new category for further research called “dissociative trance disorder.” Some of its features are described below:

(b) full or partial amnesia of the event

The above development is significant because for much of twentieth century, followers of psychoanalytic ideas explained possession as a manifestation of “repressed infantile complexes or a reconfirmation of primitive beliefs”, or manifestation arising out of subconscious oedipal complexes. [Case studies in spirit possession, Vincent Crapanzano, Vivian Garrison. Wiley, 1977]. It is important to note that the while the latest DSM does not hold spirit possession as a cause for these phenomenon, it however records the symptoms of the same and does not bracket it with any of the known mental illnesses or preferred causes or pet theories.

Self, Personality and Possession

To understand possession, we must start with a first basic question of semantics and ontology.  When we use the word self, or say that someone is possessed, what does it really mean? Or rather who, or what exactly is it that gets possessed? One of the fundamental ideas of Hindu Upaniṣadic philosophy is the presence of the Ātman inside everything, as one spiritual substratum within all existence. Leaving aside certain divergent opinions within the Mīmāṃsā School, the rest of the 5 major philosophies were clear on the matter of Ātman. But then the Ātman is unchanging, eternal and ever-present. If so, how does it get possessed by anything? Then, if we leave the Ātman aside, what else is there inside the human being? A personality – an objectification of a subjective reality – that develops inside an individual with life circumstances which in turn governs his actions and thoughts. While translating Saṃskṛtā works into English, quite often authors and scholars use the term soul, or Self to represent the Ātman, but this can lead to a semantic confusion, when discussing possession, unless we make a difference, at least for the sake of this essay, between the Self that is the spiritual essence mentioned in the Upaniṣads, and the self, as in self-hood, which is the externalized personality of an individual. A careful reading of the Vedantic literature shows that the closest description of the Self/Ātman, as opposed to a listing of its attributes and properties, comes from the Katha and Shvetashvatara Upaniṣad, which describes it as a “thumb-sized person” – aṅgúṣṭhamatrapurushah – present inside the cave of the heart – hridaye guhaayaam. This however is not what plays any part in our daily activity, or if it does, we are mostly in psychological ignorance of its role. Contrast the term Ātman to the term purusha. The later, apart from a small part of Yogic and Samkhya literature, where it is almost synonymous to Ātman, is used often to indicate a gathering of certain gunas, attributes, which define a personality and therefore is highly individualistic. For example we may refer to someone brave as vira purusha. Like the term persona [from the Latin for mask], a purusha is also made of various parts and multiple identities coalesced around or tied together by the ego-sense giving the impression of a unique individual. Knowing this difference helps us to understand that possession therefore is an act played on this persona/purusha rather than on the Ātman. Maybe in this regard the point of view of a Mimamsaka theologian like Mandana Misra comes in handy wherein the discussion pertaining to the ultimate spiritual state of Ātman is kept to a minimum, while all else of mundane life, which we are to deal with constantly, are made the chief focus of analysis.

Unlike in the West, possession in Saṃskṛtā and other local Indian languages do not fall into a one-tracked diabolical “devil’s work” kind of oversimplification. For possession can be both positive and negative, divine or undivine, of deva-s or lower, discarnate entities like bhuta, preta, piśāca, etc., of a nature that is spiritually uplifting, or invasive and damaging.

Prof. Fred. Smith mentions that in ancient Saṃskṛtā literature, both religious and secular, the word āveśa [from the Saṃskṛtā root viś meaning to enter] and many of its norminal derivatives, most notably samāveśa, has been used in the sense of possession in a benign and desirable context. But the forms of ā*viś are almost always distinguished from its close colleague pr*āviś (to enter forward), which provides derivatives such as pravesa or pravesana. In short, āveśa is friendly, benign or self-motivated possession, while pravesa is possession or absorption generated from outside.

In Indian languages there are lots of common terms used to denote possession. For example the Hindi terms “hava lagna”, “bhav ana”, “chadna”, “jagar”, “adalat” (as in the case of Hanuman’s court in Bālājīi, Mehendipur); in Bengali “bhar hoawa” (to weigh or mount); in Marathi “avesh” (from same Saṃskṛtā   root, but used in Old Marathi), or “angAt”; in Tamil “avecam”; “arude” in Simhalese (from Sk. Arudha) etc. all indicate broadly the same phenomenon, though a detailed study of their usage and context in the local language reveals a clear distinction made between ‘good’ vs ‘bad’, or harmful vs beneficial possession.  C.J.Fuller too, while reflecting on contemporary ethnographic data makes a similar observation: “in all Indian languages a distinction can be made between involuntary or ‘bad’ possession by a malevolent being and voluntary or ‘good’ possession by a deity.”

Though, it is a widely held belief that possession and related phenomenon is more common in folk aspects of Hinduism, while mainstream religion is about high flowing philosophy or strict formalized performance of rituals, a careful reading of the śāstras, however, bring out a completely different perspective. No doubt today this pervasive aspect of religion has been marginalized from our common standardized view of Hinduism, however, possession was not only a part of Sanatana Dharma, but until the medieval era, and even later in local literature, it was quite acceptable and commonplace. In later Saṃskṛtā literature derivatives of the root *grh are used to indicate seizing or grasping or possession, thus grahas of jyotisha possess an individual, and make them act in certain ways. Further, Graha Chikitsa, or bhūtavidyā is considered one of the limbs of Astanga Āyurveda dealing with supernatural causes for certain illnesses. Even a universal text like the Mahābhārata gives a graphic episode of possession of Aśvatthāmā by the ferocious form of Siva known as Bhairava, before he goes onto massacre the Pandava camp. Or the episode from the Linga Purana where Siva possesses the body of a dead brahmin using his Yogis prowess [pravistah yogamayaya] and becomes the legendary Lakuliśa. Contrast this to the bhūtavidyā of Āyurveda, and we see that possession can in fact be spiritual, powerful and beneficial for the individual as well as society in many cases.

In the next part we discuss more detailed examples of possession from Purana, Itihasa, Tantra and their link to spiritual states.

The Conflict between Tradition and Modernity in India

Made Snana: Another case of dismantling Hindu practices?